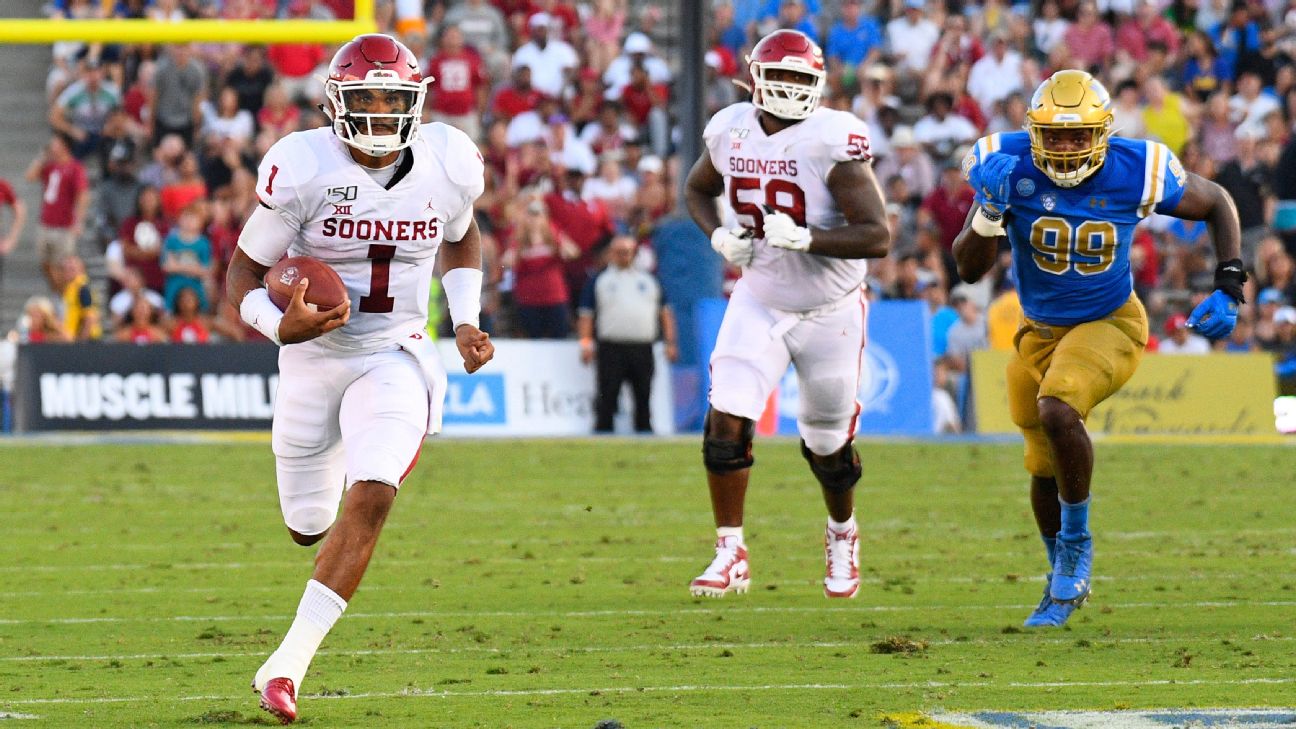 No matter the pedigree, though, you never really know if a guy is going to work out. Sometimes they don't quite live up to expectations. Sometimes they just fade into the background.

This was an enormous year for transfer QBs: For teams both good and bad, 22 have already attempted at least 30 combined passes and rushes in their respective debut seasons. A 23rd played a major role in a Week 4 win. Let's rank all 23.

For each player, I will include his team's offensive SP+ ranking (no matter how big a role he has played in it), his Total QBR rating and his passing and non-sack rushing stats.

In Mayfield's last year as OU starter in 2017, he posted a 92.3 Total QBR rating and averaged 11.7 ANY/A, outstanding numbers deserving of both the Heisman and the No. 1 pick in the NFL draft.

Three games into his graduate-level internship in Norman, Hurts has nuked those numbers. He has as many completions of 25-plus yards (12) as incompletions. He has three times more rushes of 20-plus yards (six) than sacks (two).

It is obviously early, and those numbers will slide. But recent history suggests they won't fall off all that much. The Lincoln Riley Finishing School for Quarterbacks has found another prized pupil, this one by way of Tuscaloosa.

Hurts' ridiculous performance has distracted us a bit from an almost equally ridiculous run by a player who reportedly considered OU before heading from Georgia to Ohio State.

We'll see how he handles an A-grade road environment on Saturday in Nebraska (7:30 p.m. ET, ABC), but he has backed up all of the recruiting hype he didn't get a chance to back up in Athens last season, and Ohio State is up to second overall in SP+.

There are plenty of plot twists to come, but the defining moment of Eason's first season in Seattle might have already happened. Given a chance to do what Jake Browning couldn't for UW last season -- beat Cal -- he faltered, throwing for just 162 yards and an interception in a 20-19 loss.

He has otherwise been nearly perfect, though, and he absolutely torched BYU on Saturday in Provo, going 24-for-28 for 290 yards, three scores and one pick. If the Huskies win out, they could still play a major role in the CFP race, but their margin for error is obviously slim.

After a mediocre first season under Sonny Dykes, SMU came into 2019 with minimal expectations. My SP+ ratings had them 91st overall and 91st on offense, with just a 51% chance of reaching bowl eligibility.

Now? Following the Mustangs' upset of TCU on Saturday, they have a 100% chance of bowl eligibility, and they're up to 43rd in SP+ and 27th on offense. Buechele has been the primary reason for the surge. He threw for 288 yards against what was looking like one of Gary Patterson's best Horned Frog defenses. It might not be hard to see why Texas' Tom Herman eventually chose Sam Ehlinger over Buechele, but the junior has plenty to offer.

Bryant has already topped former Mizzou starter Drew Lock in one way: He beat Will Muschamp's South Carolina. The former Clemson starter has been decent and steady, but his biggest issue is that when he makes a mistake, it's a nuclear-grade error.

Bryant had a fumble returned for a TD and threw a red zone interception in Missouri's upset loss to Wyoming in Week 1, and another pick set up a 1-yard scoring drive for South Carolina on Saturday. If Bryant makes normal-grade mistakes moving forward, the Tigers, with an outstanding defense, could win a lot of games.

Jackson's quick decision-making and short-range accuracy were crucial to the Terps' 142-point explosion against Howard and Syracuse. Temple stymied Jackson and the Terps, though. Jackson was just 15-for-38 for 183 yards and a pick in the surprising 20-15 loss.

That result made it really difficult to read what Maryland might be capable of moving forward. Glitch? Start of a downward trend? If I were to redo this list at the end of the season (and I might!), Jackson could end up in the top four, or he could end up in the teens.

The Golden Hurricane were competitive for two or three quarters in losses to Michigan State and Oklahoma State, they walloped the San Jose State team that just beat Arkansas, and this past weekend, they pulled off a dramatic 24-21 win over the Wyoming team that beat Missouri.

A former Baylor starter, Smith was brilliant against San Jose State and prolific against Wyoming, but perhaps predictably, he struggled against the power conference foes. No worries, though -- there are no more Power 5s on the schedule!

CSU incumbent Collin Hill tore his ACL for the third time in Week 3, so O'Brien, a Nebraska transfer, replaced him against Toledo. He threw for 405 yards, a touchdown and a pick, and with 694 yards (7.7 per play), the CSU offense more than did its part.

Unfortunately, O'Brien doesn't play defense. Neither does Colorado State, for that matter. The 1-3 Rams lost to the Rockets 41-35 and next must face Jordan Love and Utah State. O'Brien looks good, but it might not matter.

What a way to make an entrance. The former Wisconsin starter saved the Noles' bacon on Saturday when starter James Blackman got hurt in the third quarter. FSU was already in the process of blowing a 21-0 lead, but with the Noles down 24-21, Hornibrook completed his last six passes for 110 yards and a touchdown, and FSU scored twice to put the game away.

I'm not sure what this means going forward for FSU and Hornibrook, but he has at least one shining moment to lean on.

Was working out fine until the injuries ...

A season-ending injury to Terry Wilson in Week 2 gave Smith, a Troy transfer, an opportunity. He was up and down as UK nearly beat Florida, but his Week 4 trip to Starkville was a nightmare. Already nursing a wrist injury, he hurt his shoulder against MSU and proceeded to complete just 37% of his passes with a pick. UK's remaining slate has quite a few potential wins, but only if the Wildcats have a healthy QB capable of throwing to open receivers.

Things started almost perfectly for the Penn State transfer. He completed 73% of his passes in wins over Louisiana and Southern Miss, but he suffered a shoulder injury against USM, and his accuracy suffered. He was terrible against Kansas State, sat for much of the second half and missed Saturday's win over Kentucky. Depending on when he comes back (and how replacement Garrett Shrader is doing), Stevens could still have a worthwhile season, but that's up in the air.

The well-traveled former Tennessee Volunteer and Houston Cougar looked great in the season opener against Albany, but he first struggled, then injured his knee against Wisconsin in Week 2. He hasn't played since then. CMU could use all the help it can get.

The former Texas A&M quarterback stepped in for the struggling Ben Hicks (another transfer further down this list) and looked solid against Ole Miss and Colorado State. But his five picks were crucial in the Hogs' upset loss to San Jose State, even while he threw for 356 yards.

The Michigan transfer was rock-solid in early wins over Akron and UConn, but returns have diminished. Illinois nearly pulled a home upset of Nebraska on Saturday, but that was no thanks to the passing game. Peters went 9-for-21 for 78 yards, a touchdown and an interception.

A former Cal QB, Bowers was solid in a win over Illinois State but labored mightily in losses to Utah and Nebraska. The MAC schedule should offer some respite, and the Huskies will still be conference contenders if Bowers' numbers are at least decent.

A grad transfer from Harvard, Stewart has seen extended action while filling in for injured starter Wiley Green. He threw two touchdown passes against Texas, and his TD run against Baylor set the table for an upset that didn't quite happen. He will benefit from a drop-off in competition.

The OU transfer was erratic to start the season, but he completed 68% of his passes in wins over NC State and Kansas (combined points: 73). Although a lot of those passes aren't going anywhere, he seems to be cutting down on the outright mistakes, and it's making a difference.

Vandy's miserable defense is the main reason for the Commodores' 0-3 start. As they enter the lightest period of their schedule, they'll need more production from the decent but obviously unspectacular Neal, formerly of Ball State, to make sure they can win a high-scoring game or two.

Wimbush chose a crowded QB room to join when he left Notre Dame. He was decent in the first week against Florida A&M, but he was surpassed by freshman Dillon Gabriel and hasn't thrown a pass since. Now Darriel Mack Jr., the end-of-2018 starter, is supposedly healthy too.

Carter caught fire against UMass, going 21-for-31 for 340 yards in Rutgers' opening-week win. But the Texas Tech transfer suffered a concussion against Iowa and hasn't played since. That interception rate is terrifying, but he's exciting, at least.

Hasn't worked out as planned

At Kansas State, Delton's legs were an obvious asset, and his arm was an obvious liability. That split has grown even more extreme since his transfer to TCU. He's fast and fun, but there's a bar you have to clear when it comes to passing, and he isn't clearing it.

Hicks came to Fayetteville from SMU, where he once started for current Hogs coach Chad Morris. It seemed like a natural fit, but Hicks struggled from the start. He was just 14-for-29 in a harrowing 20-13 win over Portland State, and he was benched in favor of Starkel in Week 2.

The former Clemson signee and blue-chip prospect has really struggled this fall. He has already been benched for two QBs (TJ Green in Week 1, Aidan Smith in Week 4), and his ANY/A average barely remains positive. This offense is absolutely hopeless, and Johnson isn't helping even slightly. 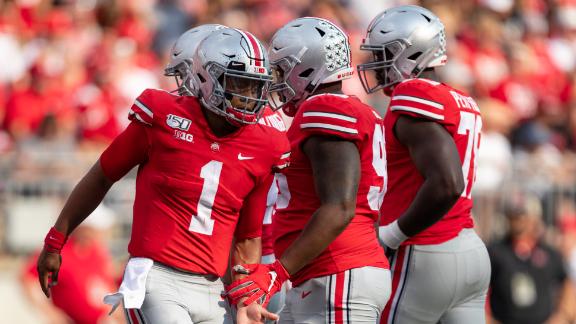 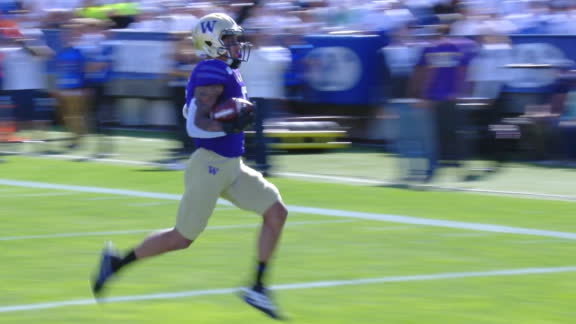 Eason finds Baccellia for his third TD pass of the day
Jacob Eason threads the needle to Andre Baccellia, who outruns the defense for a 25-yard touchdown. 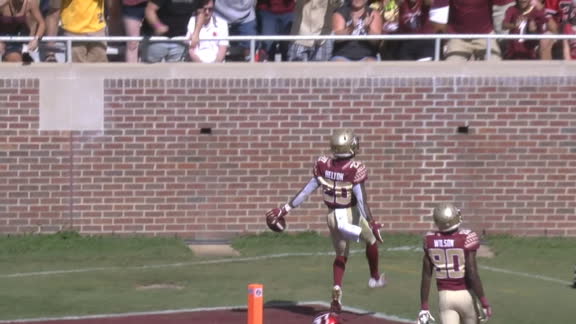