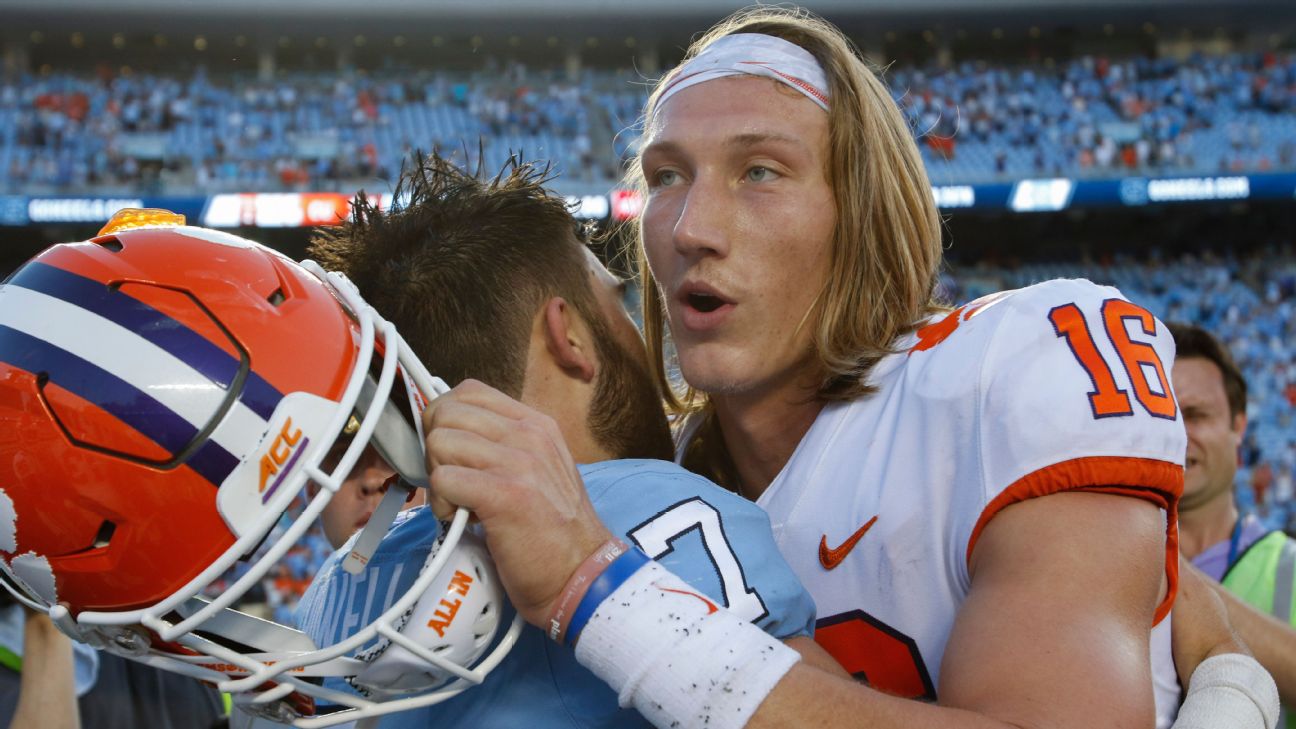 Last season, the ACC was an unmitigated mess. Clemson, once again, was great, but the rest of the league lacked star power, with Florida State and Miami down, and Louisville, Virginia Tech and North Carolina still works in progress. But the result of 2019's growing pains figures to be a much improved product in 2020, and that's obvious in our rankings, where genuine stars such asJackson Carman, Amari Rodgers and Javian Hawkins couldn't quite crack our top 25. Add in the one-year addition of Notre Dame and narrowing down this list gets even tougher (sorry,Liam Eichenberg and Ian Book). So, apologies to the long list of accomplished veterans (BC's Max Richardson, Pitt's Jimmy Morrissey) and up-and-coming talent (Clemson's Mike Jones Jr., Virginia Tech's James Mitchell) but cracking this year's top 25 requires a nearly flawless résumé.

With the new rules in place allowing for players to gain an extra year of eligibility due to the pandemic, Dabo Swinney dangled the idea that Lawrence could play three more seasons in Clemson. Forgive the rest of the ACC if it shuddered in horror. Lawrence has lost just one game as a starter -- last year's national championship against LSU -- and after some minor setbacks as a sophomore in 2019, he finished the year playing as well as anyone in college football, completing 68% of his throws with 22 TD passes and no picks over his final eight games. The only question now is what Lawrence will do in what -- despite Swinney's hopeful projection -- figures to be his final college season before becoming the top pick in the draft.

Sure Lawrence gets the headlines, and he gets the top spot in our preseason ranking, but Etienne returns as the two-time reigning ACC Player of the Year. When Etienne decided to return to school for his senior season, it seemed hard to believe, considering all he has accomplished. Etienne already owns the school and ACC records for rushing touchdowns (56) and total touchdowns (60) and goes into the season as the nation's active leader in career rushing yards (4,038).

As productive an interior lineman as there is in the country, Wilson's biggest impact in 2020 might've come on social media, when he called out his coach for a misstatement that ultimately brought FSU closer together after a tumultuous offseason with a first-year head coach and limited face time with teammates. Wilson returned to college for 2020 to refine his game for the next level, and if he improves much from 2019, it'll be a nightmare for opposing blockers.

Howell entered North Carolina last year with outsized expectations and delivered, throwing for 3,641 yards while setting the FBS true freshman record and UNC school record with 38 touchdown passes. He also was the ACC Rookie of the Year. He is one of the biggest reasons the Tar Heels enter the season ranked with hopes for an ACC championship game appearance.

Atwell is one of just four receivers in the country to return for 2020 after averaging at least 10 air yards per target and 10 yards after the catch per reception. It's a perfect distillation of what makes Atwell so special. He's a deep-ball threat (12 catches, 5 TDs on throws of 20-plus yards) and as tough to bring down as any receiver in FBS (751 yards after the catch, second most among receivers).

It's still hard to believe that Surratt has officially played only one full season as a linebacker, given everything he accomplished a year ago. Surratt was runner-up for ACC Defensive Player of the Year after racking up 115 tackles, leading the team with 15 tackles for loss and adding 31 total pressures. Coach Mack Brown said the Tar Heels plan to use Surratt in a variety of ways this season, including as a rush end.

Jones was impressive in his first year as a starter a year ago, making the Panthers one of the best defensive fronts in the ACC. He started all 13 games in 2019 and had 43 tackles, 12 tackles for loss (tied for the team lead), 8.5 sacks (second on the team), 4 forced fumbles and 18 quarterback hurries. He's an All-American candidate headed into the season.

Aside from Miami's Quincy Roche, who played at Temple last year, no Power 5 player returns for 2020 having recorded more sacks (11) or tackles for loss (18) than Basham. A force at the line of scrimmage, Basham had 14 stops at or behind the line on run plays; his 15.2% pressure rate is among the best in the nation; and his 14% missed tackle rate is tops among returning ACC defensive linemen.


Florida State has a chance to be great on defense, and Nasirildeen is one of the reasons why. The 6-foot-4, 200 pound senior has led the Seminoles in tackles in consecutive seasons, including 101 a year ago (with multiple 17-tackle games). He anchors a secondary that is loaded with talent and has an opportunity to live up to its potential in 2020.

ACC QBs would be wise not to pick on Hamilton during Notre Dame's brief foray into the league. The Irish safety picked off four passes and broke up six others last season, while allowing just one completion of 20 yards or more and no touchdowns. Opposing passers completed just 6 of 22 throws when targeting Hamilton and averaged a woeful 3.1 yards per attempt -- both rates among the top five nationally.

A dominant force at linebacker, Owusu-Koramoah led the Irish in tackles with 82 and tackles for loss with 13.5, adding 4 pass breakups, 3 QB hurries and 2 forced fumbles. And although he wasn't a featured pass-rusher, when Notre Dame did send Owusu-Koramoah after the QB, he got pressure 22.2% of the time -- the best rate on the team.

In his first year in the secondary after beginning his Clemson career at receiver, Kendrick was a revelation. He allowed just 5.3 yards per target and surrendered just two completions of more than 20 yards on the season. Kendrick added 2 INTs, 5 PBUs and 3 TFLs in a season when Swinney said he was mostly working off sheer talent. Kendrick has refined his game for 2020, and Swinney predicts even bigger things to come.

Last season, Samuel was the only Power 5 defender with 14 pass breakups (which led the ACC) and more than 45 tackles. His emergence at cornerback puts him into the top tier not just in the league but in the country.

Ford has to be the hardest hitter in the ACC, and it's not a close contest, either. The redshirt junior is expected to have his best season yet after leading Pitt in tackles (97) and interceptions (three) in 2019, while ranking second in pass breakups (11) and forced fumbles (three).

As a true freshman, Davis joined a completely renovated Clemson defensive line and immediately made an impact. He finished the season with 27 pressures, and an 8.7% pressure rate, 6.5 sacks and 10 tackles for loss -- all numbers that bested All-America candidate Marvin Wilson -- while allowing just one missed tackle for the season.

There might not be a better deep-ball threat in the country than Florida State's star receiver, who has 16 catches and 8 TDs on throws of 20-plus yards downfield over the past two seasons. Terry has endured QB struggles throughout his career with the Seminoles, but he has consistently made his passers look better. He finished second in the ACC last season with 1,188 yards.


Ashby has been a tackling machine for the Hokies. Last season, he led the ACC with 120 tackles, the most by a Virginia Tech player since 2006. He also led the team with 17 tackles for loss, ranking third in the ACC and eighth among FBS linebackers.

He wasn't even a full-time starter on Duke's D-line last year, but Rumph blossomed into one of the most productive pass-rushers in the country, racking up 43 pressures, 6.5 sacks and a pressure rate of 22.1% -- better even than Ohio State star Chase Young. A bit undersized for a traditional defensive end, Rumph has proved particularly versatile and plays with a physicality that's belied by his frame. Whether he can expand upon his success in a bigger role in 2020 is the one big question looming.

The most physical threat among North Carolina's deep corps of receivers, Brown finished last year as one of the league's top big-play targets. As a sophomore, Brown finished fifth in the ACC in yards (1,034) and second in TDs (12) while averaging an ACC-best 20.27 yards per catch. Only Iowa State's Tarique Milton averaged more among receivers who'll play in 2020.

Miami has been looking for a standout at quarterback for years now, and the Hurricanes believe they have their answer in versatile, dual-threat King, a transfer from Houston who put up big numbers during his time with the Cougars. He had 78 total touchdowns during his time there, with 6,346 yards of total offense. If he can do the same in Miami, watch out.

Roche transferred in from Temple, where he had 137 total tackles, 39.5 tackles for loss and 26 sacks in three seasons. Miami lost its best pass-rusher in Gregory Rousseau, who chose to opt out of the season, but having Roche in the fold means the Hurricanes believe they can continue putting pressure on the quarterback at a high level.

The other half of UNC's twin 1,000-yard receivers from 2019, Newsome is the smaller of the two but plays big. Newsome had 66 catches, 980 yards and 9 TDs from the slot last year -- all ranking second in the ACC -- and his catch rate of 69% ranks fifth among returning ACC receivers.

Cunningham enters the season as a far different quarterback from the one we saw at the start of 2019, if only from a confidence standpoint. Now add in his comfort in an offense that has made a habit of making big plays, plus his penchant for throwing the deep ball, and you have the makings of an even better season in 2020 -- for Cunningham and for the Louisville offense.

Cisco has been a mainstay in the Syracuse secondary since his breakout true freshman season in 2018, when he was a Freshman All-American and ACC Defensive Rookie of the Year. Despite missing three games last season with an injury, he led the ACC with five interceptions and is once again an All-America candidate at safety.