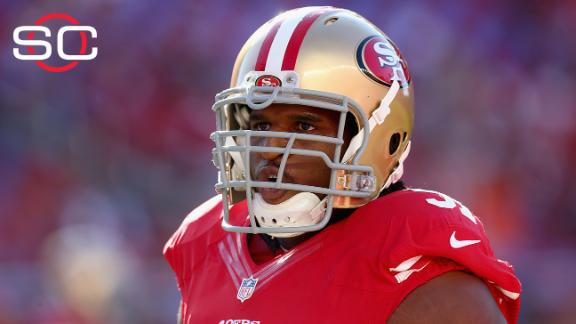 The Santa Clara Police Department confirmed that McDonald was arrested at 7 a.m. local time Monday in San Jose on suspicion of misdemeanor domestic violence and child endangerment. He was to be booked at the Santa Clara County Jail.

According to Santa Clara police, McDonald was arrested after officers said he "physically assaulted the victim while she was holding a baby." Police were called to an apartment in Santa Clara, California, but found that McDonald had left and was later found at a home in San Jose.

The San Jose address at which McDonald was arrested is that of a house that belongs to ex-49ers teammate Justin Smith, according to property records. Smith has not been implicated in the incident in any way.

The Bears did not comment on the arrest when contacted by ESPN.com, but team chairman George McCaskey initially had balked at the notion of signing McDonald earlier this offseason due to past allegations of domestic assault when he played for the 49ers.

McCaskey ultimately allowed general manager Ryan Pace to sign McDonald after the veteran defensive lineman flew to Chicago to meet with Bears management. Chicago signed the 30-year-old McDonald in March to a one-year, $1.05 million contract, with no guaranteed money in the deal.

NBC Bay Area reported that McDonald rents an apartment in Santa Clara for his former fiancee and baby. According to NBC Bay Area, McDonald went out with friends Sunday night and asked the woman to leave when he decided to return to the apartment.

McDonald's mother, LaBrina McDonald, told NBC Bay Area that McDonald's ex-fiancee had his son in March and that he sometimes visited the newborn when he was in California.

McDonald is no stranger to off-field controversies. San Francisco released McDonald in December because of what 49ers general manager Trent Baalke called a "pattern of poor behavior."

Police arrested McDonald last August for suspicion of domestic violence. The Santa Clara County district attorney's office later declined to file charges, however, following a lengthy investigation. The NFL also announced that McDonald would not be subject to league punishment for the Aug. 31 incident.

McDonald bristled at questions about his character in his first public comments since joining the Bears.

"I don't think it's right. I don't think it's fair," McDonald said in late April. "You can look on TV and see all this negative stuff said about somebody, and people can put out stuff that's not very credible and they can assassinate someone's character by doing that. But when you actually get a chance to meet someone and hear their side of the story, then you get to see it for what it really is."

McCaskey acknowledged in March that he changed his mind about McDonald after their face-to-face meeting and a phone call to McDonald's parents.

"We have a 96-year tradition of doing things a certain way, of bringing a certain type of player into our team," McCaskey said at the time. "And those were my concerns going into the conversation with Ray. But I think you look at every situation individually. You try to find out as much information as you can that's reliable to make the best decision you can about whether to offer a player the privilege of becoming a Chicago Bear.

"Obviously I'd been around him for four years, so I knew what kind of guy he was on a daily basis, and nobody gets to know players and players get to know coaches more than when you're in football because we're with those guys eight, nine hours a day, and in training camp more," Fangio said at the team's rookie minicamp.