Ray McDonald to sue for defamation 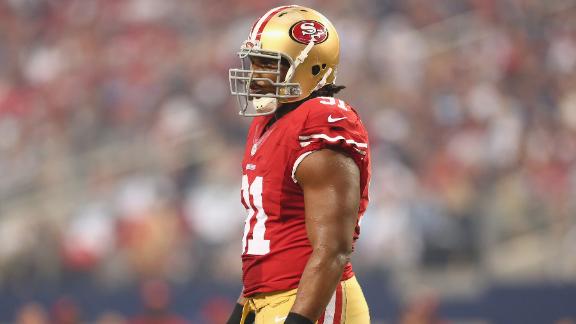 Former San Francisco 49ers defensive end Ray McDonald confirmed to ESPN's Josina Anderson on Monday that he plans to sue the woman accusing him of rape.

"I feel like what I am doing is the right thing because I know that I am not this bad person that people are making me out to be," McDonald told ESPN on Monday. "I've been fired from my job. I know some teams don't even want to talk to me because of this past accusation. All I am trying to do is clear my name and move on with my life."

McDonald has been investigated by local law authorities on suspicion of sexual assault. He has not been charged with any crime.

The San Jose Mercury News earlier reported that McDonald's lawyer, Steve M. DeFilippis, would file a lawsuit on Monday morning. McDonald has been trying to catch on with an NFL team since he was released by the 49ers in December for "a pattern of poor decision-making."

"In the eyes of the NFL teams, the unresolved threat of charges being filed against him, even though factually unfounded, continues to present a roadblock to this remarkable athlete being able to move forward in his career," DeFilippis said in a release. "This lawsuit is intended to vindicate him ... and return his good name."

According to court documents that were written by San Jose police investigators to obtain a search warrant for McDonald's home, the accuser told authorities she fell and hit her head on the ground near the pool and has no memory of the sexual encounter that occurred in McDonald's San Jose house, which police say occurred Dec. 14, a few hours after the 49ers returned from a 17-7 loss to the Seahawks in Seattle.

The 49ers cited a "pattern of poor decision-making"that ultimately led to the defensive lineman being "terminated."

"While this organization has a strong belief in due process and has demonstrated that over time, Ray has demonstrated a pattern of poor decision-making that has led to multiple distractions for this organization and this football team that really can no longer be tolerated," Niners general manager Trent Baalke said in a December news conference. "And that's the reason for the decision that we made today."