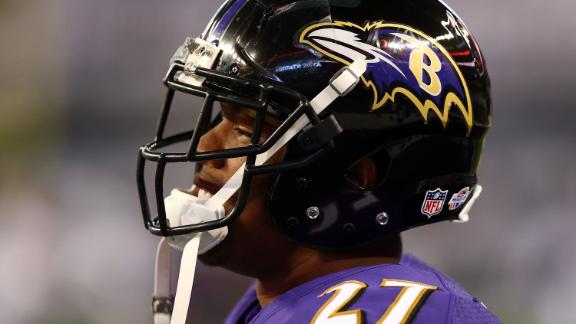 NEW ROCHELLE, N.Y. -- Ray Rice attended a football game at his high school in a New York City suburb Saturday, his first public appearance since a video surfaced showing him punching the woman who became his wife.

The recently released running back was seen by several media outlets at New Rochelle High School with his wife, Janay Rice, and their daughter.

Rice was released by the Baltimore Ravens and suspended indefinitely by the NFL on Monday after video of him throwing the punch in an Atlantic City casino elevator was released by TMZ. Previously, he had been suspended two games by the league and the Ravens organization had announced its support for him.

The case has put the NFL in an uncomfortable spotlight as it faces criticism for how it handles cases in which players are accused of domestic violence.

The schools superintendent for New Rochelle, Brian Osborne, said in a letter emailed on Thursday that "our community stands united in the belief that physical violence to settle differences cannot be condoned."

The high school also removed Rice's jersey from its wall of fame and took down a placard honoring him. But the team's coach indicated that the program wasn't completely severing ties with its former star.

"The New Rochelle football program is a very strong program, and once you're a member of that program, you're a member of that program for life," coach Lou DiRienzo said, according to The Journal News. "Ray is a part of our family and a part of this program, and that's why I'm very happy that he's here today. He made a mistake -- and he made a very terrible mistake -- but I know the character of the man, and he will rise from this."