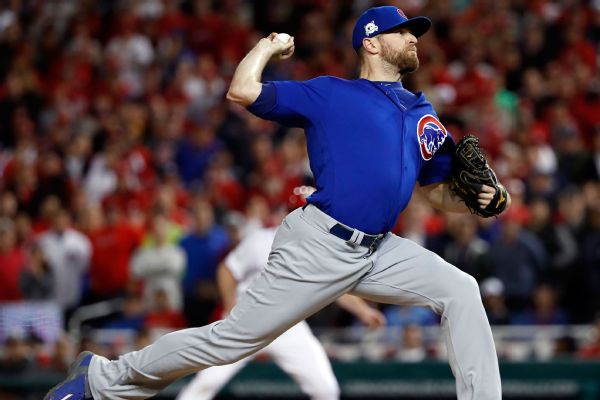 ESPN
Right-handed reliever Wade Davis, who saved 32 games for the Chicago Cubs last season, has agreed to a three-year deal with the Colorado Rockies, the team announced Friday.

Davis' agreement is for $52 million, a source told ESPN's Jerry Crasnick. The contract includes a vesting player option that can increase the value to four years and $66 million if Davis finishes 30 games in 2020 and picks up his option, a source said.

Sources said the Cubs were willing to go only two years in a deal to bring back Davis, who had a near-perfect season as a closer in 2017, blowing a save opportunity for the first time late in September. He set a career high in saves while sporting a 2.30 ERA.

Davis is the third significant free-agent bullpen signing this winter for the Rockies, who previously added Bryan Shaw and Jake McGee on three-year, $27 million contracts. Greg Holland, who saved 41 games this season, declined a $15 million option in November and became a free agent.

Rockies manager Bud Black and pitching coach Steve Foster played a significant role in recruiting Davis to Colorado, a source said. Foster was a coach in theKansas City Royalsorganization when Davis joined the Royals in 2013, and he has since moved on to become Colorado's pitching coach.

Davis, 32, reached free agency after three solid years as a closer, two with Kansas City and the last with the Cubs. The former starter is often credited with still pitching with a starter's mentality, as he'll use his breaking stuff to set up his fastball as much as the other way around.

Like many closers, he often walked a tightrope but rarely gave in. Also, like many top closers, he proved capable of going multiple innings in a playoff situation, though sometimes with mixed results.

Davis' agreement with the Rockies was first reported by Yahoo! Sports.