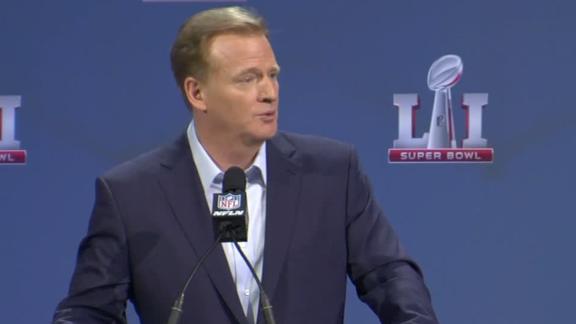 HOUSTON -- Roger Goodell has not attended a Patriots home game since the NFL handed down Deflategate penalties, but the commissioner said Wednesday that he's not avoiding Gillette Stadium.

"If I'm invited back to Foxborough, I will come," he said at his annual Super Bowl news conference. "I have no doubt that if I wanted to come up to a Patriots game and I asked Mr. Kraft, he would welcome me back. That's up to him."

Later, Patriots owner Robert Kraft said Goodell would be welcomed at Gillette Stadium for the 2017 opener if the Patriots win the Super Bowl.

Kraft, who has been publicly critical of Goodell's handling of Deflategate, sat in the front row of the news conference. He was in attendance in conjunction with the league's announcement that the Patriots will be playing the Oakland Raiders in Mexico City during the 2017 regular season.

Kraft wasn't available to reporters for comment after Goodell's address, departing quickly to attend the team's afternoon practice. He issued a statement later Wednesday through a team representative.

"I've talked to a lot of fans who would love to welcome Roger back to Gillette Stadium," Kraft said. "If we are fortunate enough to win on Sunday, the kickoff of the [2017] NFL season would present the perfect opportunity."

As for how his relationship with the Patriots has changed since Deflategate, Goodell cited "a disagreement about what occurred."

"We've been very transparent about what we think the violation was," he said. "We went through a lengthy process. We disagree about that. But I continue to respect and admire Robert, Jonathan [Kraft] and the entire organization. They are an extraordinary organization, and they are an extraordinary team, in my opinion. So I have a very deep and close relationship to them.

"But that doesn't change that we have to compartmentalize and can disagree. But I'll be honest with you, I have disagreements with probably all 32 of our teams. I'm not afraid of disagreement. I don't think disagreement leads to distrust or hatred. It's just a disagreement. You take your disagreements, find a common place and move forward. That's what it is. It's not all personal in nature, which I know people like to make it. For us, it's about making sure we do what's right for the league long term."

Asked how awkward the situation is for him with the Patriots and their fans, Goodell said, "It's not awkward at all. ... From our standpoint, we understand fans who are loyal and passionate for a team object and don't like the outcome.

"I don't expect for one second for people to agree with every decision I make or we make as a league. Those are always difficult, sometimes contentious, and sometimes less-than-perfect decisions. But you do them in the best interests in the long-term health of the game and the NFL."

Asked whether he has spoken with Patriots quarterback Tom Brady over the last two years, Goodell said he doesn't disclose those conversations.

Brady was asked Wednesday what it would mean to him if Goodell attends next season's opener, and the QB said, "I'm just focused on being quarterback, doing my job, and playing my role. Whoever's at the game is at the game, and whoever's not is not going to affect me one bit. I gotta go out there and focus on what I need to do, and that's try to be a great quarterback.

"We've got a big game this weekend. And I'm going to try to do my best job that I've ever done in my entire life. I'll have a lot of people that support me there watching, and I'm gonna go make them proud."