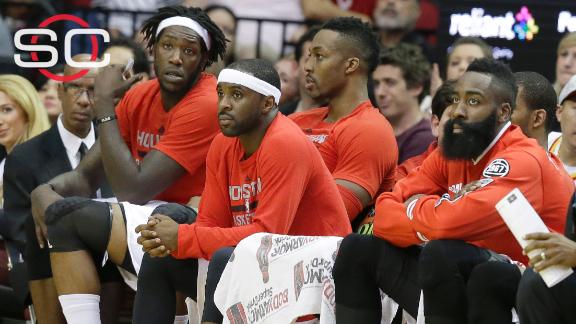 HOUSTON -- The Houston Rockets, in the midst oftheir longest losing streak since 2013, held a players-only meeting on Tuesday morning at the Toyota Center.

While certain details of the meeting weren't revealed, communication and clearing the air were among the talking points.

"What happens in the room, stays in the room," center Dwight Howard said following practice. "It was good for us to sit down and talk, but it's a long season and you can't get caught up in losing a couple of games and getting upset and so frustrated and feel like it's the end of the world. It is embarrassing. We hate to lose but at the same time we have a long season and we can't think negative when we lose. We have to try and find the positive in any situation. You keep thinking negative, then negative things will continue to happen to you. You got to stay positive and fight through it. All this stuff will build our character."

After the Rockets opened the season 0-3, they went on a four-game winning streak, which included consecutive road wins over theSacramento Kings and Los Angeles Clippers. But the Rockets have lost their past four games, and failed to reach 100 points in each.

Houston is averaging 20 fewer points in their losses. In their recent slump, the Rockets have lost to a then-winless Brooklyn Nets team anda short-handed Dallasteam, in addition to their second loss of the season againstDenverand a 110-95 defeat toBostonon Monday. The Celtics were playing their fifth game in seven days when they beat the Rockets.

That loss prompted point guard Ty Lawson to remark that the team needed a meeting.

"We brought everything up in the meeting, everything turned out well," Lawson said. "We got open feelings and communication. I feel like we're on the same page now."

James Hardenagreed the meeting was productive. The Rockets' best player has seen his scoring average drop from 38.5 points per game in victories to 20.9 in losses. He's shooting 46.4 percent from the field in wins, and 30.2 percent in losses.

"It was a good talk for us," Harden said. "We hadn't had an opportunity to communicate like that since the season had been going. It was good for us to communicate and each guy basically said what their role was and every single night they're going to contribute to that role. After the talk we had a really good practice, guys communicated, we worked hard and now it's about carrying it over. It's about doing it on the floor."