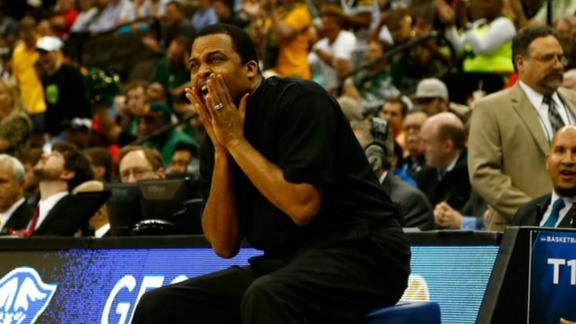 JACKSONVILLE, Fla. -- Georgia State coach Ron Hunter cracked his cast when he fell from his rolling chair while celebrating his team's winning 3-point shot against theBaylor Bears in the round of 64 of the NCAA tournamenton Thursday.

Hunter said Friday his doctor wants his leg recast before the Panthers play Xavier in the round of 32 Saturday night. The coach is in a cast because he tore his Achilles tendon celebrating the Sun Belt conference championship last week. He has put off surgery until after their tournament run ends.

"When I got to the locker room, I started pulling some of the stuff away and [the cast] just opened up, and [my doctor] looked at it. She said, 'This is wrong, you're making it worse.' I don't even know what recasted means, and she said something about a saw and oh, my goodness, I don't know.

"This has been an interesting, interesting week. We're winning, I'm getting banged up. The players are absolutely just killing me with all this right now. I'm rolling around in, not even a wheelchair, in a scooter that's half broken. ... But I won't trade this for the world. It's been great."

His son, R.J. Hunter, made the 3-pointer with 2.6 seconds left to give No. 14 seed Georgia State the 57-56 upset win. Almost simultaneously, Hunter fell off his rolling chair onto the floor. The fall has been replayed countless times since it happened, and players described seeing memes made about it -- including one that showed Hunter falling in front of the White House.

Hunter joked when asked how he is dealing with his newfound fame.

"I'm still trying to get fame in my own house. I don't know what you're talking about," Hunter said. "My daughter is here. She's getting married in a few weeks, and we had breakfast this morning, and all she asked was for another check to write out for this wedding thing.

Despite the fall, the highly superstitious Hunter says he will be back in the same rolling chair Saturday.

"That chair has more protection than the president of the United States right now," he said. "Whenever we leave, I'm taking that chair with me. Win, lose or draw, that chair is going to be in my house with me the rest of my life."

Ron Hunter Gets Fuel From Bilas
Georgia State head coach Ron Hunter joined "Mike & Mike" to talk about how ESPN's Jay Bilas' comments are helping his team prepare for the games in the NCAA tournament.