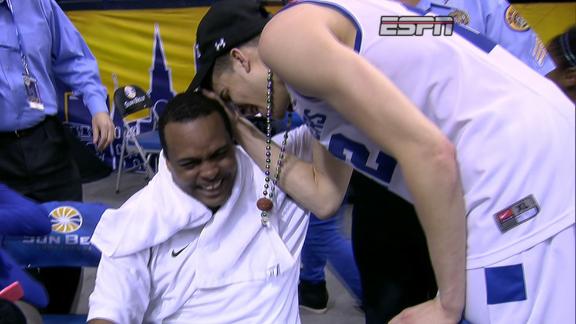 Hunter injured his left leg during the celebration after Georgia State's 38-36 win over Georgia Southernon Sunday and had to be helped off the court.

Hunter was hugging his son R.J. Hunter, who made the deciding free throws with 21.6 seconds left, and jumping up and down when he suffered the injury.

He did return to be with his team as it continued the celebration. The basket had to be lowered so that Ron Hunter could cut the final pieces of the net.

"I tore my Achilles on the right side years ago playing basketball," Hunter said. "This was the exact same feeling and I knew when I jumped up ... I knew when I came down that I had done it (again), but instead of stopping right there, I wanted to go celebrate with my team. More importantly I wanted to go celebrate with my son. You don't get many opportunities like that."

"I'm actually embarrassed by this because it takes away from what these kids have done," Hunter said. "The team doctor is here and she said we're probably going to cast it and we'll do everything after the tournament. They wanted me to stay here, but I'm going back with my guys. I'm not staying in New Orleans, I want to be with my guys.

"We'll deal with this tomorrow. Nothing is going to keep me from going to the NCAA tournament with my guys and celebrating tonight with them. The pain between 1 and 10 is about 17 but I've taken so many pills I don't know if I'm feeling anything."

Kevin Ware, who suffered a severe leg injury during Louisville's run to the 2013 national championship, scored 18 points for Georgia State, the only double-figure scorer in the low-scoring game, while R.J. Hunter finished with nine.

Georgia State will play Baylor in the NCAA tournament.

Georgia State Coach Injured Celebrating Win
Ron Hunter appears to have injured his ankle while jumping around with his son, Panthers guard R.J. Hunter, after winning the Sun Belt tournament title and a ticket to the Big Dance.