Russia should be barred from Olympics, WADA board says 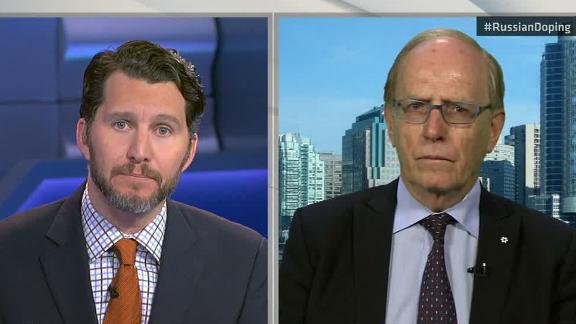 The World Anti-Doping Agency's executive board wants the International Olympic Committee to ban all Russian teams from the Rio de Janeiro Olympics following a report showing the scope and length of state-directed doping in the country.

WADA issued a seven-point list of requests after it published a report from Canadian law professor Richard McLaren that confirmed claims of state-backed Russian cheating at the Sochi Olympics and beyond.

The anti-doping watchdog also called on the world governing bodies of sports implicated in the report to consider action against Russian national bodies.

Calling the report a shocking and unprecedented attack on the integrity of sports and on the Olympic Games, IOC president Thomas Bach said the committee will not hesitate to take the toughest sanctions available against those implicated. The IOC executive board will meet via conference call Tuesday to make initial decisions on possible sanctions for the Rio Games.

McLaren dubbed Russia's program the "disappearing positive methodology" in the report, which was released Monday by WADA.

The investigator said allegations made by Grigory Rodchenkov, Moscow's former anti-doping lab director, about sample switching at the Sochi Olympics went much as described in a New York Times story published in May. That program involved dark-of-night swaps of dirty samples with clean ones, which prevented Russian athletes from testing positive.

In short, Russia's deputy minister of sports, who was also part of Russia's Olympic Committee, would direct workers at Moscow's anti-doping laboratory of which positive samples to send through and which to hold back. Assisting the plan was Russia's national security service -- the FSB, the current version of the Soviet Union's KGB.

McLaren said out of 577 positive sample screenings, 312 positive results were held back -- or labeled "Save" by the lab workers -- but that was only a "small slice" of the data that could have been examined. More than 240 of the 312 "Saves" came from track and field and wrestling, and other sports involved included swimming, rowing, snowboarding and table tennis.

Minister of Sport Vitaly Mutko personally intervened to cover up a doping case of "at least 1 foreign [soccer player] in the Russian League," according to McLaren. The report says 11 positive tests by Russian soccer players were made to disappear in the state-sponsored doping program.

It was "inconceivable that Minister Mutko was not aware of the doping cover-up scheme," according to evidence from Rodchenkov.

The 97-page McLaren report is the result of a two-month investigation. McLaren said he is confident the document was not leaked and stands by its credibility.

Several athlete and anti-doping groups, including the U.S. Anti-Doping Agency, were gearing up over the weekend to send letters to the IOC urging that Russia's entire delegation be banned from next month's Rio Games.

Olympic leaders had said those moves undermined the report and called it "disappointing" that the groups would try to have Russia banned in such an "underhanded" way.

McLaren said the moves to send the letters were based on nothing more than speculation. He did not include a recommendation for punishment in the reportand urged the IOC and others to absorb the information and act upon it as they wish.

Travis Tygart, the CEO of USADA, called the report proof of a"mind-blowing level of corruption" andurged the international community to come together to ensure that what he called an unprecedented level of criminality never threatens sports again.

Tygart's statement did not include a call for a full ban of the Russian team from the Rio Games.Last week, he said if the report was as damning as expected that he would push for such a ban.

U.S. Olympic Committee CEO Scott Blackmun said in a statement that the report "confirms what we have stated previously: the current anti-doping system is broken and urgently requires the attention of everyone interested in protecting clean athletes."

"In the meantime, we are focused on preparing Team USA to compete at the upcoming Rio Games and will rely on the IOC, WADA and the international federations to impose sanctions that are appropriate in relation to the magnitude of these offenses, and that give clean athletes some measure of comfort that they will be competing on a level playing field in Rio," Blackmun said.