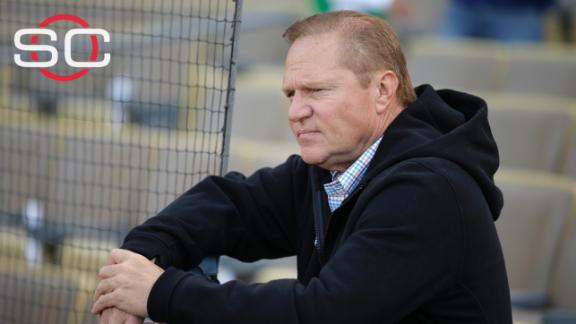 Agent Scott Boras took aim at MLB Network for its televised draft coverage Tuesday, saying the network has "censored" analysts from mentioning his company and failed to acknowledge the beneficial role his group plays in advising amateur players.

Boras served as an adviser to seven first- or second-round picks this year -- including Atlanta high school outfielder Daz Cameron and Louisville pitcher Kyle Funkhouser, both of whom were selected in lower spots than anticipated before the draft began.

"What I find interesting is, MLB has censored its announcers from referencing our company,'' Boras said in a text message. "MLB is not committed to a free journalistic standard."

Boras' name was referenced on one occasion during Monday night's broadcast, when MLB Network analyst Greg Amsinger cited the agent's involvement as a likely reason for the two players slipping, and draft authority Jonathan Mayo half-jokingly referred to him as "Lord Voldemort.''

Boras also said the network's draft coverage has fostered an inaccurate perception that he has strained relationships with teams, and some of his players have fallen in the draft and lost money as a result.

"What upsets me is, teams have no issues with us and know our players are quality,'' Boras said. "Instead, you have analysts suggesting the reason players are still on the board is that teams don't want to work with us. That's an absolute misrepresentation of the truth of the matter.''

MLB Network officials declined to respond directly to Boras' comments. Instead, a spokesperson issued a blanket statement about the network's draft coverage.

"MLB Network has televised the MLB draft for seven consecutive years, and each year its coverage includes comprehensive, independent analysis from former players, front office executives, journalists and draft experts from across the industry -- including MLB.com and Baseball America,'' the statement said.

Cameron, the son of former big-league outfielder Mike Cameron, was widely reported to be seeking a bonus in the $5 million range before falling to Houston with the 37th overall pick. Although the recommended bonus value for the No. 37 spot is $1.67 million, Cameron is expected to receive a considerably higher payout in light of the financial flexibility the Astros have with their $17.3 million draft pool.

Last year, Boras advisee Carlos Rodon signed with the Chicago White Sox for the largest bonus in the draft ($6.582 million) as the No. 3 choice after top pick Brady Aiken failed to reach agreement with Houston. In 2012, Boras was the adviser for pitcher Lance McCullers Jr., who received a $2.5 million bonus with the Astros as the 41st pick. That was almost double the recommended bonus value for the spot.

In 2012, Stanford pitcher Mark Appel turned down a reported $3.8 million from Pittsburgh as the eighth pick in the 2012 draft. Appel returned to school as a senior, got his degree and re-entered the draft in 2013. Houston chose him first overall, and he received a reported $6.35 million bonus.

"There was nothing from MLB [Network] on how we were right,'' Boras said. "That is the No. 1 pick and a huge part of the story. But not a word.''

Some of the media-related intrigue surrounding agents in the baseball draft is attributable to the vague rules governing their involvement. Although agents play a significant role in negotiating draft bonuses with clubs, they're referred to as "advisers'' and ostensibly serve a more limited role than their counterparts in football and basketball.

Boras said any evaluation of an adviser's effectiveness needs to focus on whether his players receive fair market value with their bonuses -- not on where they land in the draft.

"Every MLB team reaches out to us about the draft and their plan and how they want to execute the process,'' he said. "Some of the analysts are unaware of what's going on. The MLB draft (unlike the NFL and NBA) is an economic draft. It's about the level of the bonus, not the pick.