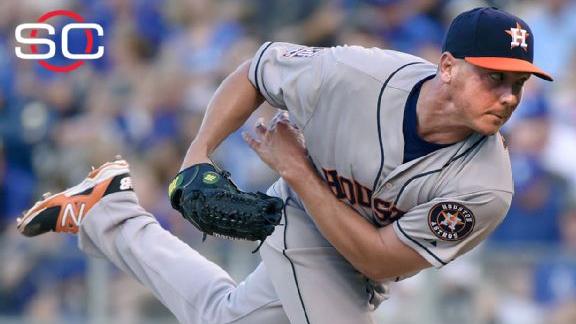 Kazmir pitched seven strong innings in his Houston debut, leading the Astros to a 4-0 win over the Kansas City Royals on Friday night.

Kazmir, 31, limited the Royals to three singles, and only one runner -- Mike Moustakas in the fourth -- got past first base. Kazmir (6-5), who lowered his ERA to 2.24, retired the final nine batters he faced.

"It's nice to get the first one out of the way," Kazmir said. "When you have a defense like I had behind me, especially what you see the first couple of innings, you have a lot of confidence out there. I just pitched to contact."

Kazmir was acquired by the Astros from Oakland on Thursday for two minor leaguers. He hasn't lost a July start since July 10, 2010, going 7-0 in his past 14 starts.

Kazmir met his catcher,Jason Castro, for the first time just before batting practice.

"He's going to be huge for us," Castro said. "Obviously, the reason we went out and got him is exactly what he did tonight, to give us solid innings. We can't expect him to throw a shutout every time, but that would be nice. That's exactly what we were hoping to get out of him; to have another arm like that in our rotation is going to be huge."

Preston Tucker had three of the Astros' hits, including his fourth home run in five games -- a solo shot in the third inning. Colby Rasmus singled home Carlos Correa later in the inning to make it 2-0.

"I hadn't got a chance to see him pitch this year," Tucker said of Kazmir. "I knew he was good. I didn't know what to expect. That was awesome. That's just what we needed."

Correa, a 20-year-old rookie who extended his hitting streak to nine games, and Jose Altuve each singled home a run in the fourth inning.

Left-hander Tony Sipp walked Moustakas and gave up a single to Eric Hosmer in the ninth, which prompted manager A.J. Hinch to summon closer Luke Gregerson for the final two outs. Gregerson logged his 21st save in 24 opportunities, getting Kendrys Morales to ground into a game-ending double play.

Kazmir was too much for the Royals to overcome.

"He really handled us with fastballs and changeups," Royals manager Ned Yost said. "But changing speeds ... his fastball was 93-95. His changeup was 74 to 80. A lot of variation there. Really commanded the ball well, kept the ball down. Busted us in when we started looking away and off-speeded us down and away when we were looking in."

The Astros won their fifth straight and are 6-1 since the All-Star break. The Royals are 0-4 against the Astros this season.

Astros: RHP Scott Feldman will be making his second start since May 26 and going on the disabled list after knee surgery.