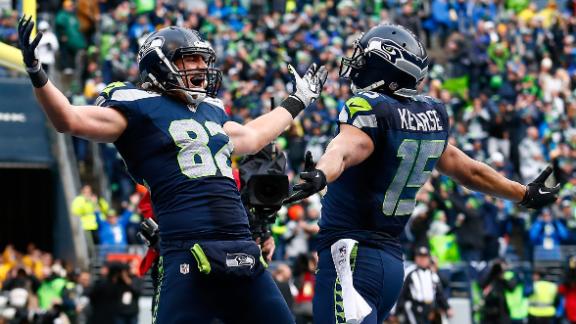 SEATTLE -- Earthquake experts with the Pacific Northwest Seismic Network have analyzed the CenturyLink Field shaking during the Seahawks' win over the Packers in Sunday's NFC title game.

The experts say the biggest event was caused by all the jumping and dancing that followed the touchdown and 2-point conversion as Seattle rallied near the end of regulation.

The University of Washington's Steve Malone calls it a "dance quake" generated by bouncing fans.

Malone says that dance quake was the biggest seismic signal associated with a Seahawks game -- even bigger than the 2011 "beast quake" that followed a Marshawn Lynch touchdown run and originally drew the attention of earthquake trackers.

Other earthshaking events Sunday were Seattle's fake field goal touchdown and the winning touchdown in overtime.

Seattle Fans Generate Seismic Activity
Professor John Vidale discusses the seismic activity the occurred during the NFC Championship Game on Sunday as the Seahawks mounted a comeback against the Packers.