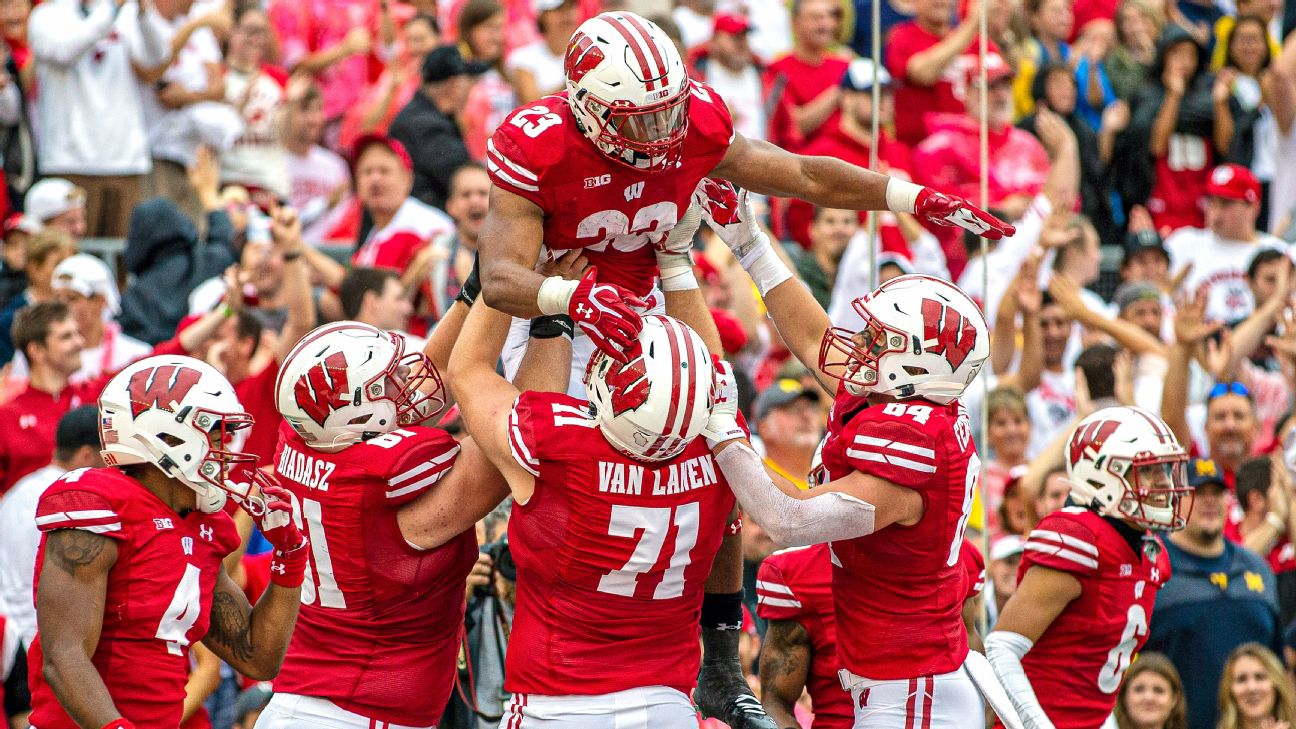 No. 12 Oregonisn't out of the College Football Playoff race -- but it will be if it can't beat Washingtonon Saturday in what is arguably the most impactful game of Week 8. Since a season-opening loss to Auburn, a 27-21 nail-biter, the Ducks have fallen out of the national spotlight, along with the entire Pac-12, but Oregon has quietly gotten better each week. The Ducks are off to their first 3-0 start in league play since 2013. They have the No. 3 scoring defense in the nation. They lead the nation in points off turnovers. Quarterback Justin Herbert has thrown one interception in his past 239 pass attempts.

The preseason expectations were soaring -- and then Auburn converted a fourth-and-3, by the nose of the ball -- and the entire narrative changed.

"Since that game, as a team, we've just learned to close out games the way you're supposed to close them out," Oregon coach Mario Cristobal said. "They scored on us with nine seconds left in the ballgame. Certainly a tough one to swallow, but guys have understood and appreciated the importance of every single play and the detail, the attention to detail required to be successful each and every play. Some better results."

If Oregon can keep it up, it has the potential to make things difficult for the 13-member selection committee, but the Ducks aren't the only ones. Penn Stateor Michigancan still win the Big Ten.Bayloris still undefeated in the Big 12. The SEC is always capable of adding to the chaos.

As we enter the second half of the season, there are plenty of scenarios -- some wilder than others -- swirling around the College Football Playoff picture.

1. Clemsonloses to South Carolina. Don't believe it can happen? Ask Georgia. Nobody thought the Bulldogs would go down at home as 20.5-point favorites last week, either. Clemson ends the regular season on the road against its in-state rival, the most difficult game remaining on the schedule -- and ESPN's FPI still gives Clemson an 80.7% chance to win. If Clemson loses and finishes as a one-loss ACC champ, there's no guarantee the Tigers finish in the top four. It would all depend on what happens in the other Power 5 conference races. The Tigers' schedule strength -- which now ranks No. 71 from an average top 25 team's perspective -- would have to be better than a possible second SEC team,Notre Dame, the Pac-12 champ and/or the Big Ten runner-up. As of now, Clemson's only win against a ranked opponent is Texas A&M, and none of the Tigers' opponents are above .500. They have a combined record of 15-21. The CFP selection committee is not supposed to consider last season, which means Clemson's title as defending national champ is deemed irrelevant in the room.

2. Ohio Statebeats Wisconsinduring the regular season but loses to the Badgers in the Big Ten title game. This scenario also could be flipped, with Wisconsin pulling the upset Oct. 26 in Columbus but losing to the Buckeyes in the Big Ten title game. The biggest question facing Wisconsin's place in the playoff race is Ohio State, and it has been that way since the 2014 Big Ten title game. If the Badgers are going to take the next step, they have to beat the Buckeyes at least once. What if it's for the conference title? Don't dismiss the possibility of two Big Ten teams, but only if one wins the Big Ten and the other's only loss is to the champion. Wisconsin's strength of schedule already includes a win against Michigan (the Badgers should be pulling for the Wolverines against Penn State on Saturday), and will only get better with a total of four currently ranked opponents. If Wisconsin loses to Ohio State during the regular season but avenges the loss in the Big Ten title game, it could be exactly what the Badgers need -- much like what happened to Big 12 champion Oklahomalast year after losing to Texasduring the regular season. The question is if Ohio State could still get in as runner-up. It would depend on what the SEC runner-up looks like, as well as how Ohio State looked in the loss. We've already seen what 59-0 can do to a team in the Big Ten.

3. Floridawins the SEC -- but LSU'sonly loss is to Alabama. Is there any chance the selection committee rewards the head-to-head in this case, or would the SEC title outweigh it? Or would the committee take both? This would be a difficult debate, because Florida would have beaten Auburn, Georgia and most likely Alabama en route to the conference title. LSU would have beaten Texas, Florida and Auburn. The question is if Florida's statement victories would outweigh FCS wins against UT Martin and Towson, and how wins against Miamiand Florida Statewould be valued.

4. Georgia and Notre Dame both win out. This is tricky because Georgia owns the head-to-head edge over Notre Dame, and if Georgia wins out and earns the SEC title, that means a very good team from the SEC West is on the CFP bubble. There wouldn't be a better loss in the country, though, than Notre Dame's to the eventual SEC champ. If the committee puts Notre Dame and Georgia in the top four, that means two Power 5 conference champions are left out -- again. It wouldn't be so far-fetched to consider Texas beating Oklahoma for the Big 12 title, and the Pac-12 having a two-loss conference champion. The top four could be Georgia, Notre Dame, Ohio State and Clemson.

5. The selection committee has three SEC teams to consider. Georgia wins the SEC, Alabama's only loss is to Georgia in the SEC title game, and LSU's only loss is to Alabama during the regular season. Wut. This one's scary for every other Power 5 conference -- especially if they produce one-loss conference champions. If Georgia runs the table and wins the SEC, which isn't impossible considering it still has the best chance to win the East, according to ESPN's FPI, the Bulldogs are in. They would have defeated Notre Dame, Auburn, Florida, Alabama -- more than compensating for the bad loss to South Carolina. LSU would have defeated Texas, Florida and Auburn. Would that be enough without a division title? Alabama's best wins would be against LSU and Auburn. Of the three of them, Alabama has the most questionable schedule. The committee would also factor in how close the SEC title game was. Improbable scenario? Yes. Impossible? No.

6. Baylor beats Oklahoma and Texas but loses to the Sooners in the Big 12 title game. Undefeated Baylor will have home-field advantage for both games in back-to-back weeks. The Nov. 16 trip is the most difficult game remaining on the Sooners' regular-season schedule, and the Bears are the only other ranked opponent left. According to the Allstate Playoff Predictor, OU's chances of finishing in the top four would drop to 33.7% with a loss Nov. 16 -- but if the Sooners go on to win the Big 12 title, they still stand a 41.4% chance to make the playoff. According to ESPN's FPI, Texas has a 52.2% chance to beat the Bears. It's unlikely either Oklahoma or Baylor would get in without winning the Big 12. One loss, though, wouldn't doom the Sooners if they finish as Big 12 champs.

7. Oregon finishes as a one-loss Pac-12 champ and other Power 5 conferences have one-loss champs, too. The Ducks are the Pac-12's strongest contender and heading into their most difficult game of the regular season.

If the Ducks win, their chance to reach the playoff will climb to 15%, according to the Allstate Playoff Predictor; a loss would drop that number to 1%. Here's the thing, though: If Oregon runs the table and wins the league, that percentage skyrockets to 43.8%. Oregon would have road wins against Washington, USCand Arizona State, along with a win against a ranked opponent in the Pac-12 title game. Oregon's current schedule strength rank of No. 47 registers ahead of Ohio State (No. 66), Clemson (No. 71) and Oklahoma (No. 84).

The Pac-12 remains in the most precarious position of the Power 5 conferences, but as long as it has a chance at a one-loss conference champion, it will be considered by the selection committee.

"We don't get ahead of ourselves," Cristobal said. "We know the dangers and pitfalls of looking past the things that are important. What's important is right now. ... We're where our feet are all the time, we're very grounded."

8. SMU,Boise Stateand Appalachian State finish undefeated. The highest-ranked Group of 5 conference champion is guaranteed a spot in a New Year's Six bowl, but who would get the nod if both Boise State and SMU run the table? Statistically, they're nearly identical in ESPN's strength of schedule and strength of record metrics. Boise State won at Florida State. SMU won at TCU. The main difference? According to FPI, Boise State has a 24% chance to win out, and SMU has only a 3% chance. SMU is the FPI favorite to win the AAC West (42%), but the Mustangs' top challenge likely will come from Memphis or Tulane. And what about Appalachian State? The Mountaineers still have to travel to South Carolina on Nov. 9 -- ESPN's FPI gives them a 19% chance to win -- but if they pull off a victory en route to a Sun Belt title, it's the kind of road win that could separate them from the other New Year's Six contenders. Where they all begin is one storyline worth watching when the first ranking is released on Nov. 5. 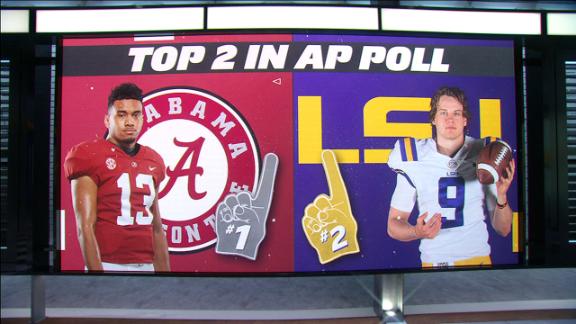