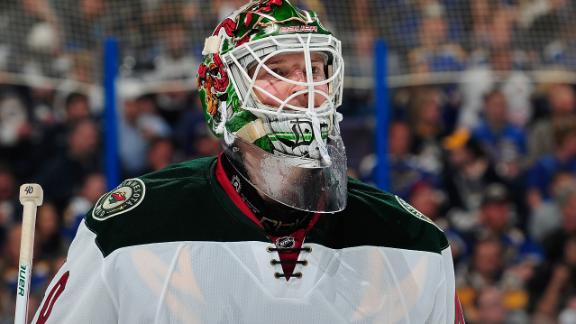 This version of the Wild is a more experienced and rounded team. They are well ahead of the group that gave the Blackhawks little problem in five games in the first round two years ago, and have lived and learned and added an elite goaltender since battling six games with the Blackhawks in the second round last season.

The Wild have taken a step each season and now feel they're as prepared as ever to take that next one. But to do that, they'll need to knock off the Blackhawks, a team that has proved itself at the highest level in the playoffs and has had the Wild's number.

The Wild understand the significance of having to go through Chicago to advance.

"That's a big part," Wild forward Zach Parise said after eliminating the St. Louis Blues on Sunday. "These guys are, every year, they're Cup contenders. For us to want to get in that conversation with them, we've got to beat them. Again, it'll be a good series. It'll be a tough series."

The Blackhawks also realize that beating the Wild for a third consecutive season won't be easy.

"The way they played at the end of the year coming into the playoffs, that they made it through that round and beat a very good team, now that we face them, I feel like they're getting better and better in a lot of ways every year," Blackhawks captain Jonathan Toews said Monday. "I think it's going to be the toughest test we've seen in a long time, so it's up to us. We know there's another level we need to get to."

Fancy stats
One of the main reasons for the Blackhawks' recent playoff success against the Wild is that Chicago has been able to contain Parise, the Wild's most talented offensive player.

The Blackhawks held Parise to a Corsi percentage of 50 percent or worse in eight of the teams' 11 playoff games the past two seasons. He had a minus-5 goal differential against Chicago in 2013 and a minus-2 differential last season. He also recorded just one goal in 2013, and one goal and three assists in 2014. Against other teams in his playoff career, he's had 24 goals and 29 assists in 68 games.

Parise will obviously be looking to produce more this time around. He is coming off a strong series against the Blues. He scored three goals and had four assists in the six-game series. He also had a plus-2 goal differential.

"He's one of those guys we want to key on, for sure, and try to make his job as tough as we can," Toews said.

MVP
The Blackhawks possess plenty of stars, but there will be no bigger player on the ice than Wild goaltender Devan Dubnyk when the puck is dropped in Game 1.

Dubnyk has transformed the Wild over the past three months. He went 27-9-2 with a 1.78 goals-against average and .936 save percentage after being acquired from the Arizona Coyotes in mid-January. He held the St. Louis Blues to fewer than two goals in all four Wild wins in the first round.

The Blackhawks know all about him, too. The Wild beat Chicago twice in recent months thanks to Dubnyk. He stopped 56 of 57 shots against the Blackhawks.

"I think the whole league had that challenge at the end of the year," Blackhawks coach Joel Quenneville said Monday. "If he sees the puck, he's going to make it tough on you. That's the one thing we've got to do. We know when you play him, you don't expect to score a lot of goals. But you want to make sure you don't give up much."

For the Blackhawks, Patrick Kane has picked up right where he left off before suffering a fractured clavicle in late February. He was tied for the league lead with 64 points in 61 games when he was injured.

Gut check
As the Wild continued piling up wins in January and February, many believed their good fortune would eventually run out. Well, it's almost May and they haven't stopped winning.

Since Dubnyk started his first game for the Wild on Jan. 15, they have gone 32-11-3. They not only turned their season around but also made themselves Stanley Cup contenders.

The Blackhawks are as much a psychological hurdle for the Wild as anything. The Wild haven't been able to surpass Chicago for two years running and, just their luck, they run into the Hawks for a third year in a row. Still, it's hard to see the Blackhawks as the team that derails the Wild's run.

Secret weapon
Blackhawks forward Bryan Bickell was undoubtedly ecstatic when he discovered who the second-round opponent was. Bickell loves playing the Wild more than any other team, by far. Against Minnesota the past three campaigns, he's had eight goals and two assists in 12 regular-season games, and seven goals and three assists in 11 playoff games.

"It's one of those things, you can't say why, but certain guys, certain teams -- they seem to jump out of you," Quenneville said recently in trying to explain Bickell's success against the Wild.

The skinny
The Wild have improved, especially by adding a world-class goaltender, and the Blackhawks aren't as deep as they once were, especially in their defense pairings. Unless the Blackhawks drastically improve on their defensive effort and goaltending consistency in the first round, they will have a tough series. Wild in 7.

Best performance from opening round of NHL playoffs
Barry Melrose picks Devan Dubnyk's performance in goal for the Wild as the best through the first round of the Stanley Cup playoffs.