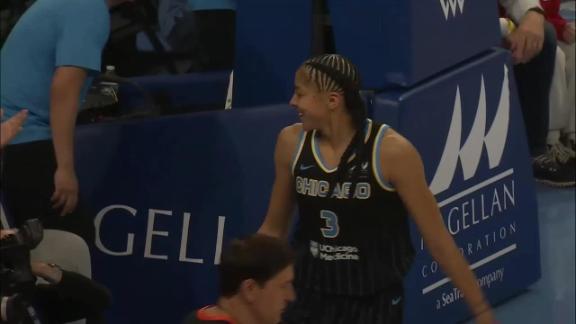 Parker, coming off her second career triple-double on Sunday, also had three steals and three blocks while shooting 6 for 9 from the field.


Courtney Vandersloot had 14 points, six rebounds and seven assists for Chicago (4-2). Kahleah Copper and Allie Quigley each scored 12 and Dana Evans had 10 points.

Stevens beat the third-quarter buzzer with a basket in the lane to give Chicago a 70-65 lead. After Kelsey Mitchell pulled Indiana within 93-90 with 21.8 seconds left, Vandersloot sank two free throws to seal it.

Mitchell scored 25 points for Indiana (2-7), which has lost five games in a row. Victoria Vivians had 17 points and seven rebounds, and Emily Engstler recorded her first career double-double with 11 points and 13 rebounds.

The Chicago Sky players and coaches were honored before the game with a championship ring and banner ceremony.