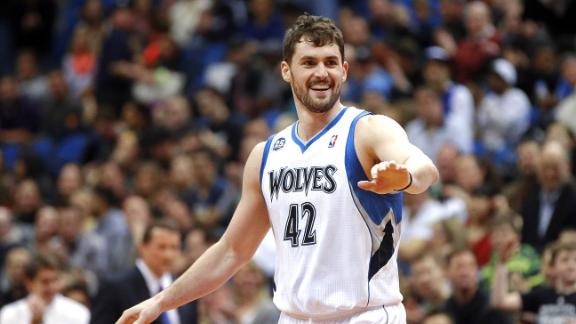 The Timberwolves and Warriors have continued to discuss a Kevin Love trade, but the teams remain unable to agree on the framework of a deal, with Golden State still unwilling to include Klay Thompson, according to sources close to the process.

Sources told ESPN.com that Wolves owner Glen Taylor and Warriors counterpart Joe Lacob have maintained a level of dialogue on a potential trade of Love to Golden State, which sources insist would have been clinched by now had the Warriors -- at the behest of new coach Steve Kerr -- relented on their refusal to part with Thompson.

The Warriors have been unwilling to offer the Timberwolves more than a combination of former All-Star forward David Lee and 2012 lottery pick Harrison Barnes -- likely packaged with a future first-round pick -- in exchange for Love and swingman Kevin Martin, according to sources.

Golden State, however, knows it now has serious competition for Love, with the rejuvenated Cleveland Cavaliers known to be interested in trading for the All-Star power forward.

The Cavaliers have declared that Andrew Wiggins, last month's No. 1 pick in the NBA draft, is off-limits in any trade talks, but sources say Wolves president Flip Saunders is adamant that he won't surrender Love unless he gets back Thompson or Wiggins.

The Associated Press reported Tuesday that Saunders and Warriors general manager Bob Myers were spotted in discussions Sunday at the NBA's summer league in Las Vegas.

Minnesota could elect to wait to see if offers improve for Love as the pool of available free agents continues to dwindle, but an increasing number of rival executives expect the Timberwolves to trade him before next season starts, given how well known it is around the league that he intends to become a free agent in July 2015.

The Wolves risk losing Love without compensation if they don't deal him before the league's annual trade deadline in February.