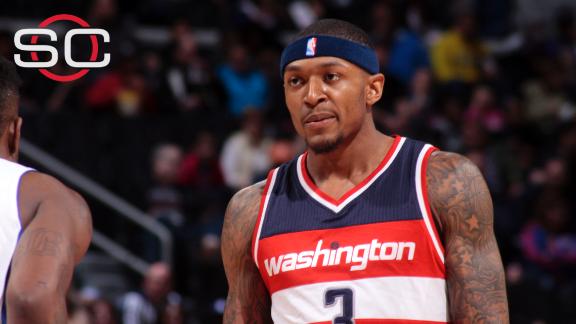 "We are working really hard to finalize an agreement," Beal's agent, Mark Bartelstein, told ESPN, confirming that he and the Wizards are on track to finalize terms later Friday.

A deal can't be signed until the league-wide moratorium on signings and trades is lifted July 7, but the parties can strike a verbal agreement.

Beal played in a career-low 55 games (35 starts) for the Wizards this past season due to injuries, including a stress reaction in his right fibula. He has dealt with injuries over the course of his four-year career and has never played more than 73 games in a season.

Beal, 23, averaged a career-high 17.4 points per game this past season. He and John Wall form one of the top backcourts in the NBA.

The shooting guard turned down a lucrative contract extension from the Wizards before the 2015-16 season, saying he felt he is a player worthy of a maximum contract.

"I feel like I'm a max player, and that's what I'm looking for. If Washington can't meet that requirement, then I may be thinking elsewhere," Beal also told The Washington Post in late May. "I'm pretty sure that they probably won't [let me go]. At the end of the day, that's where I want to be. I think a deal will probably get done, but you just never know."

Beal, who earned $5.6 million the past season, is a restricted free agent, so another team could sign him to an offer sheet, and the Wizards would then have three days to match. The Wizards can ask Beal to delay signing the contract in order to maintain enough cap space to pursue other elite free agents.

Information from ESPN.com's Ian Begley was used in this report.

Windhorst: Beal deal not a surprise
Brian Windhorst reports the latest on Bradley Beal, who is deep into talks with the Wizards on a five-year contract that will keep him in Washington.
Related topics:
sportsespnbradley bealdealagreementfree agencycontracttalkswashington wizardsnba
Copyright © 2020 ESPN Internet Ventures. All rights reserved.
More Videos
From CNN Newsource affiliates
TOP STORIES