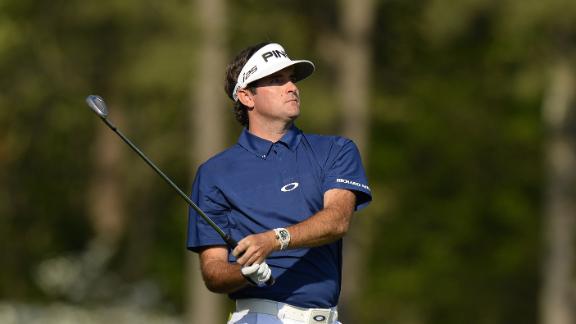 AUGUSTA, Ga. -- The possibility for the youngest winner in Masters history exists, as does the chance for the oldest major championship winner ever.

Throw in a guy trying for his second green jacket in three years, and another trying to win his country's first major championship, and a handful with the chance to join a recent trend of first-time major winners, and a compelling Sunday awaits at Augusta National.

Playing in his first Masters, 20-year-old Jordan Spieth shot a 2-under-par 70 on Saturday and is tied for the third-round lead with 2012 champion Bubba Watson at 5-under 211.

Matt Kuchar and Sweden's Jonas Blixt are another shot back, with 50-year-old Miguel Angel Jimenez and Rickie Fowler just two shots behind. Among that group, only Watson has won a major.

Spieth would become the youngest Masters winner, Blixt the first from Sweden to win a men's major, and Jimenez the oldest major champion dating to the first one in 1860.

Throw in Kuchar, who is in search of a first major, and Fowler, who is looking to live up to the hype. And then there's longtime European Tour rivals Lee Westwood and Thomas Bjorn another shot back, followed by 2003 U.S. Open champion Jim Furyk.

"There's a lot of players I think going to be in with a chance tomorrow," said reigning U.S. Open champion Justin Rose, who is 4 shots back.

Defending champion Adam Scott fell off the pace with a 76 that included a front-nine 40. He is six strokes back and in a tie for 16th.

The carefree, feel-no-pressure attitude that Watson, 35, took into this year's Masters will be put to the supreme test now. A shaky third round, combined with the knowledge that another green jacket is very much in play, took care of that.

If a sleepless night is in order, at least Watson knows he was unlikely to be alone in the quest for rest as an intriguing last day looms. His 74 included five bogeys and two three-putt greens, but he managed to make a good par-saving putt on the 18th to earn a spot in the final group with Spieth.

"If someone would have told me I'd shoot 74 and still be tied for the lead, I'd have taken it all day long," Watson said. "The emotions were good all day. The key was making some putts down the stretch, and luckily I did."

Spieth is trying to become the first player to win his Masters debut since Fuzzy Zoeller in 1979. He'd also be the youngest Masters winner ever -- younger than 21-year-old Tiger Woods in 1997.

Spieth made four birdies and two bogeys Saturday to become the youngest Masters player ever in the final group on Sunday.

"The way you gain respect for this golf course is the fact that it's really, really hard. Lightning fast around the greens. It's pure and it's fair, but it's extremely difficult. You have to give respect to it."

Kuchar pulled within a shot with a 68. Blixt, a two-time winner on the PGA Tour who played collegiate golf at Florida State, is also a shot back after a 71.

Jimenez matched the lowest score ever shot by a player age 50 or older at the Masters, a 6-under 66 accomplished just twice previously by Ben Hogan in 1967 and Fred Couples in 2010, who is currently four strokes back and tied for 10th.

A victory for Jimenez would make him the oldest Masters winner, surpassing Jack Nicklaus (age 46 in 1986), and the oldest major champion, beating out Julius Boros (age 48 at the 1968 PGA Championship).

"That would mean a lot," said Jimenez, who has won 20 times on the European Tour. "I have plenty of victories in my career and having a major in my career would be amazing. That would be the flower on top."

Spieth was barely exempt for the PGA Tour at this time a year ago. A victory at the John Deere Classic earned him many things -- nearly $900,000, a spot in the following week's Open Championship and a two-year tour exemption. But biggest of all to him was an invitation to the Masters.

"This is the place I've always dreamt about," Spieth said. "I thought it was a good fit for my game. So far, so good."

He could become the youngest major winner since Tom Creavy captured the 1931 PGA Championship at age 20.

"He's young," Watson said. "Nerves are no big deal to him.

"I've won one, so I've got that going for me. If I play bad I still have a green jacket. We're all trying to win the same thing, we all know what it means for our careers and our status in the game."

Spieth, Bubba Tied For Lead At Masters
Jordan Spieth and Bubba Watson, 5-under, tied for the lead at the Masters heading into the final round.

Spieth Looking Forward To Final Day
Jordan Spieth comments on his third-round performance at the Masters, which resulted in him being tied for the overall lead with Bubba Watson.