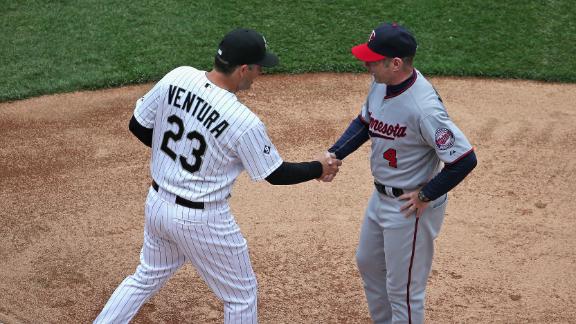 CHICAGO -- A wave of hype carried the Chicago White Sox into spring training.


A fleet of cars and trucks took the White Sox onto the field before Friday's home opener.


And the usual crowd of angry, disgruntled Sox fans gave their heroes a proper welcome with cascades of boos during a desultory 6-0 loss to the Minnesota Twins at U.S. Cellular Field.


Welcome back, South Side baseball. Dadgummit.


The announced crowd of 38,533 -- a sellout on paper if not in terms of actual bodies -- didn't get much to cheer for. A Micah Johnson bunt single, an Avisail Garcia outfield assist, a little sunshine.


They certainly didn't appreciate Hector Noesi pitching (poorly) instead of, say, Carlos Rodon, or Johnson getting the team's lone hit through the first 7 innings, and also getting thrown out trying to steal third.


Twins pitcher Tommy Milone retired 16 consecutive hitters from Johnson's single in the third until Tyler Flowers doubled with two outs in the eighth.


"Today was not a good day," third baseman Gordon Beckhamsaid in his return home. "Any way you slice it."


Sox manager Robin Ventura says he thinks his players are feeling a little early pressure to perform, "maybe believing in the hype" a bit too much.

"You get a sense guys are trying to hit a five-run homer with one guy on," he said. "In the end, you're going to be better off when you go through this, but these guys gotta fight through it."


Noesi walked six (one intentionally), hit the second batter of the game on a bounce, and threw two wild pitches (one of which brought home a run) in 4 innings. Amazingly, he gave up only two runs. Noesi loaded the bases three times, including that intentional walk, but got out of each situation.


"When you bounce it and hit a guy, it's probably control problems," Ventura said.


The Sox don't have a quality start through four games. The ageless Jose Contreras, who threw out the first pitch, might want to keep his phone on vibrate.


Before the game, White Sox general manager Rick Hahn said it was obviously too early to "extrapolate" anything out of the first three games, and that remains true after the fourth loss, too.


Good thing there are 158 more games to go. Or maybe that's a bad thing.


"Despite what I've read in some venues, we are not yet out of it," Hahn said before the game.


No kidding. Gotta wait 'til the weekend's over, Rick.


Five teams in the wild-card era have started 0-4 and made the playoffs, but no World Series winner has ever started 0-4.


So no need to start saving footage for that 10-year anniversary documentary, Comcast SportsNet Chicago producers.


But it's not as if this start is a good way to promote these new-look Sox, the one with the huge offseason infusion of talent.


"The fact of the matter is is there is likely going to be a spot at some point this season where we are going to lose three in a row," Hahn said. "Unfortunately, it came the first three of the season, which lends to overreaction. It lends to people extrapolating out trends or themes which frankly are very likely not there."


After the game, Beckham updated Hahn's quote by noting, "There's going to be a time that every team is going to lose four in a row."


Good thing the Sox got it out of the way early. Beckham has experience in seeing Sox expectations die on the warning track, so he knows how pessimistic it gets around here.


While the White Sox were not most prognosticators' division favorites this season -- that would be the Detroit Tigers -- there were, and still are, high expectations for a playoff-caliber ballclub on the 10th anniversary of the 2005 World Series team. Money was spent, hopes were raised. The Sox haven't been shy about promoting this team.


"There are a lot of high hopes and expectations," Hahn said. "People waiting many months to see this team come together. People want to see it fulfill those expectations immediately."


That would be nice, and not just for good vibes. A sweep in Kansas City and getting outscored 27-7 through four games won't do much to drum up fan interest in a team always trying to sell itself as an entertainment choice.


"I understand," said Johnson, a fast runner and a quick learner. "They had a lot of excitement in the offseason so they expect us to come out hot and stuff. Like Gordon said, four losses in a year is going to happen. It just so happens it happened right now early in the season. We are going to keep working. We come with enthusiasm every single day."


In every sport, people talk about the importance of getting out to a good start before a season begins, until it doesn't happen. Then it's no big deal, plenty of games left.


"I know you have to go back to 2014 to find the last playoff team who started off 0-3," Hahn said. "Our plan is to turn the page and start a winning streak of our own today."


That didn't happen Friday, but there are 158 more tomorrows to try, try again.