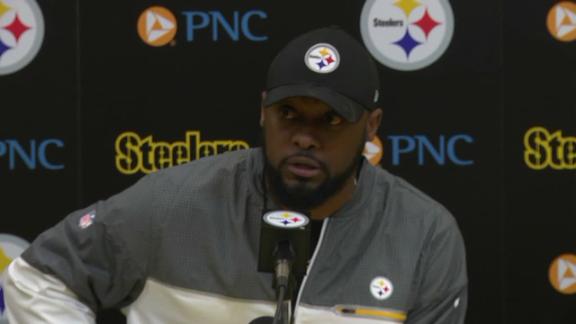 "I let my emotions and genuine excitement get the best of me, and I wanted to share that moment with our fans," Brown said in a statement posted on his Twitter account. "It was wrong of me to do, against team and NFL policy, and I have apologized to Coach Tomlin and my teammates for my actions.

"I'm sorry to them for letting it become a distraction and something that they've had to answer questions about while we're preparing for a big game on Sunday."

"He obviously didn't try to hurt anybody," Bell said.

After Pittsburgh's 18-16 AFC divisional-round win against theChiefs on Sunday, Brownstreamed video of himself making poses on Facebook Live. In the 17-minute video, Tomlin's voice could be heard highlighting how the team's AFC Championship Game opponent, the Patriots, had a head start in preparations for Sunday's game.

New England played its divisional-round game Saturday, some 24-plus hours before Pittsburgh visited Kansas City in a game that was moved from 1 p.m. ET Sunday to 8:20 p.m. for inclement weather.

"When you get to this point in the journey, man, not a lot needs to be said," Tomlin could be heard saying. "Let's say very little moving forward. Let's start our preparations. We just spotted these a--h---- a day and a half. They played yesterday. Our game got moved to tonight. We're going to touch down at 4 o'clock in the f---ing morning. So be it. We'll be ready for their ass. But you ain't got to tell them we're coming.

"Keep a low profile, and let's get ready to ball like this up again here in a few days and be right back at it. That's our story."

The video had more than 900,000 views just a few hours after it aired. It was removed from Brown's page Monday morning.

Speaking Tuesday, Tomlin called his comments "regrettable" but said he would punish Brown internally for streaming the video without permission.

Because Brown violated the NFL's social media policy, which prohibits posting messages 90 minutes before kickoff through postgame interviews, he could elicit a fine.