Steph Curry: Finals loss 'hurts,' but Warriors will return to this stage 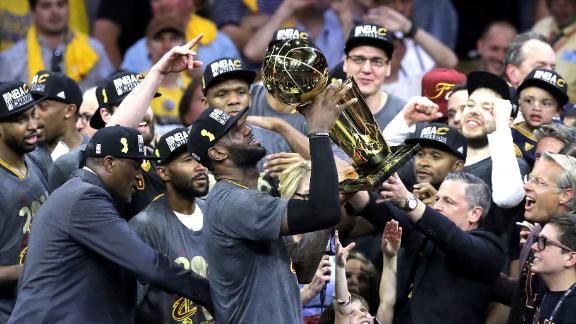 OAKLAND, Calif. -- After losing Game 7 of the 2016 NBA Finals to the Cleveland Cavaliers 93-89,Golden State WarriorsAll-Stars Stephen Curry, Klay Thompson and Draymond Green expressed their pain and their regrets.

"It hurts, man," Curry said after the game. "I mean, that's all I'm really kind of marinating on right now."

When asked about his physical state, given that he had sprained his MCL in the first round against the Houston Rockets, Curry said, "I'm fine. I mean, I have three months to obviously get ready for next season. I won't get injured celebrating tonight, I can tell you that much."

The Warriors missed their last nine shots to finish the game.

When Thompson was asked why Golden State could not close the game, he said, "I mean, I don't know. It's hard for me to answer that right now. It is the hardest thing I've ever had to go through in my sports career. It's just difficult to process right now."

Thompson shot 6-of-17 for 14 points, and his backcourt mate Curry went 6-of-19 for 17 points. When asked why the Splash Brothers weren't themselves in Game 7, Thompson responded, "I really can't. I'm sorry."

In contrast, Green scored efficiently and notched 32 points on 15 shots to go with 15 rebounds and nine assists. He previously said Golden State would have won the series in Game 5 had he not been suspended for a swipe at LeBron James' groin at the end of Game 4.

"This playoff run, for me, has been a bunch of highs and a few lows, and the lows have kind of been tough," Green said. "Because there have been some instances where character was attacked, and I've said, being suspended for a game, not being able to be out there with my teammates, you know, it's been a pretty tough road."

On the incident in Game 4 and subsequent Finals loss, Green said, "I learned from it, and I'll be better. But I'm not afraid to say that it's my fault. I think it was. But this ain't the last that you'll see from us."

"It's not a good feeling, like I said," Curry said. "At the end of the day, we want to keep this memory so that it will fuel us as we stay together as a team. Because like Draymond said, this ain't the last time you're going to this stage.

Curry: 'Gotta just take the good with the bad'
Steph Curry says he's proud of everybody on the Warriors while acknowledging it's difficult to finish the season by losing in the NBA Finals.