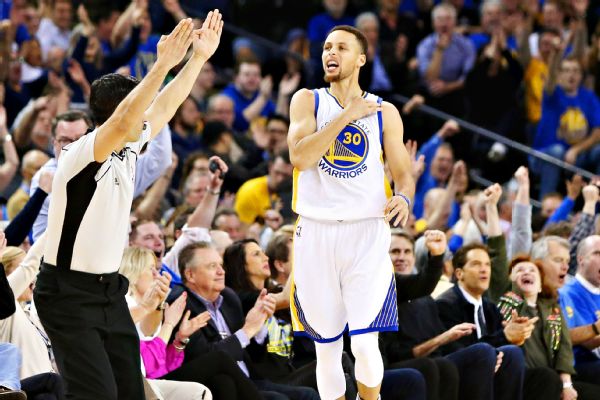 ESPN
CHARLOTTE, N.C. -- Warriors coach Steve Kerr says what amazes him about Stephen Curry is how immensely popular he is with young kids -- maybe even more so than his former Chicago Bulls teammate Michael Jordan in his prime.

"The crowd size is similar, but the biggest difference is the children that gravitate toward Steph," Kerr said in comparing the two players' fan base following. "You see so many little kids with Steph jerseys begging for his autograph."

Jordan is arguably the NBA's most popular player ever, but Kerr theorizes young kids today relate to Curry because of his relatively modest stature. The league's two-time MVP stands 6-foot-3 and 190 pounds with a thin frame.

"They all identify with him," Kerr said prior to the Warriors' game Wednesday night against the Jordan-owned Hornets. "He's probably the rare superstar where an 8-year-old kid can go, He looks just like me. Maybe I can do it."

Curry's new teammate Kevin Durant believes social media has something to do with that.

"I see 3- and 4-year-olds with IPads now, so they can obviously see more highlights from Steph and follow him on his social media," Durant said. "Access for him is a little more" than Jordan.

Still, his shoes and merchandise sales and the Jordan brand empire continue to thrive 14 years after his retirement.

Durant said there is no telling how big Jordan would be in today's high-tech environment.

"MJ didn't grow up in the social media era and he was still huge," Durant said. "Imagine if he grew up in this era being Michael Jordan, being the first global NBA superstar. Can you imagine what his following would be?"

But Durant agrees that one of the reasons Curry is so popular is because of his size, considered small by NBA standards.

Curry's jersey sales still rank No. 1 in the league, according to figures released Tuesday -- ahead of James, Durant and Russell Westbrook.

"He is relatable being 6-foot-3 and baby-faced," Durant said. "When he was in high school he was probably 6-feet and 160 and to make it to be one of the top five players in the world, well it feels like anybody can do it. He's inspirational."

Curry's NBA father Dell, who now works for the Hornets broadcast network, said he saw a similar scenario playing with the 5-foot-3 Muggsy Bogues in Charlotte.

"Any guy that is short with a clean-cut face, kids are going to navigate to," Dell Curry said with a laugh. "I see a lot of that in Steph. It's like, I don't have to be 6-foot-8 with bulging muscles to be a professional player."

Stephen Curry is well aware of his following among today's youth, which he said is one of the reasons he tries to be positive role model.

"To be a guy that they look up to or they want to play like or emulate on the court is pretty special," Curry said. "To know that you have support from the next generation that is getting into the game and that you have a huge influence on them, I definitely appreciate that."
Related topics:
sportsespngolden state warriorsstephen curry90s bullsrussell westbrookmichael jordannbasteve kerrcharlotte hornetscleveland cavalierschicago bullsdell currykevin durantmjlebron james
Copyright © 2020 ESPN Internet Ventures. All rights reserved.
More Videos
From CNN Newsource affiliates
TOP STORIES