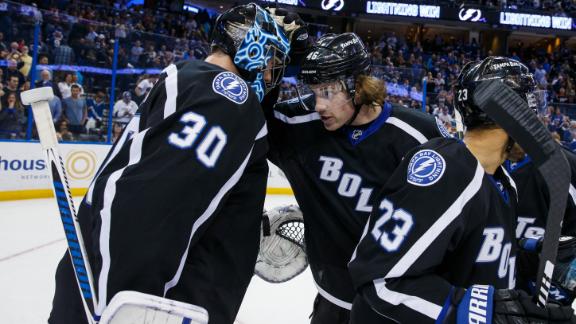 Tampa Bay Lightning forward Steven Stamkos will undergo surgery to treat a blood clot in his right arm and is expected to miss one to three months, general manager Steve Yzerman said after the team's 3-1 victory over the New Jersey Devils on Saturday.

Stamkos will have the surgery Monday in Tampa, Florida.

"Obviously, this situation is extremely disappointing because I wanted to help my team clinch a playoff spot and prepare for the start of the postseason," Stamkos said in a release. "During my recovery, I will do all I can to help my teammates, and I hope to rejoin them soon in the Stanley Cup Playoffs."

Stamkos played in a 3-0 loss to Montreal on Thursday but missed Saturday's game with what the team initially announced was an upper-body injury.

Yzerman said in his postgame news conference that Stamkos has a type of vascular thoracic outlet syndrome near his right collarbone. It's the same thoracic syndrome that goalie Andrei Vasilevskiy dealt with at the beginning of the season.

"After Thursday's game, Stammer went in to see the doctors,'' Yzerman said. "He had some discomfort in his arm, some swelling, some tingling in his fingers. [Friday] morning, we had it assessed by doctors locally, and it was determined he has a blood clot in his arm.''

Stamkos has had only one other major injury in his career. He missed 45 games in the 2013-14 season after breaking his right tibia.

This injury is another major blow for the Lightning, whose top defenseman, Anton Stralman, has a fractured left leg and will miss at least the first round of the playoffs.

Yzerman said it will be a couple of weeks before it is known if Stamkos' absence will be closer to one month or three, but he said a full recovery is expected. Although the team does not have any immediate plans for Stamkos' replacement, Yzerman told reporters that calling up Jonathan Drouin was "certainly something we have to consider."

Drouin, who scored just twice in 19 games for the Lightning before being sent to the team's AHL affiliate, has nine goals in his past 10 games for the Crunch since returning from his suspension for refusing to report to Syracuse.

The Lightning have four games left in the regular season, which ends with a game at Montreal on April 9. They're currently second in the Atlantic Division with 95 points, two behind the Panthers.