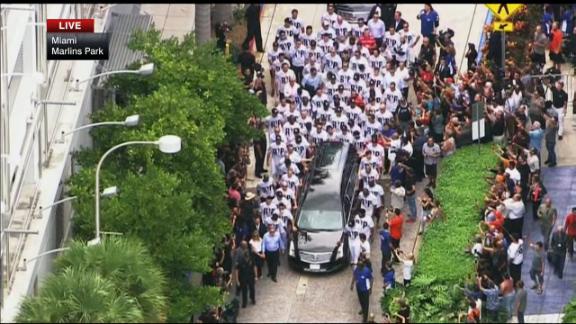 As several hundred grief-stricken Marlins fans gathered to see the hearse carrying Fernandez's body ride past Wednesday afternoon, they bonded over shared memories and personal observations. As one bearded Marlins fan in a No. 16 Fernandez jersey and teal cap told his neighbor, the pitcher "had a smile that lit up a whole city."

Early Sunday morning, Fernandez, 24, died in a boating accident along with two companions, Emilio Macias and Eduardo Rivero. Fernandez will be buried Thursday in a private ceremony attended by his family, teammates and Marlins employees. But Wednesday was a day for public mourning, as the fans who embraced him in life flocked to the ballpark to say goodbye.

Several hundred brought flowers, waited in line to inscribe messages with black Sharpies on a stadium pillar, and celebrated the qualities that allowed Fernandez to hold South Florida in his grip over four seasons.

"I've never seen someone take time out the way he did, signing autographs -- especially on the days when he was pitching," said Rick Gerena, a Marlins fan from Coral Springs, Florida. "He was always talking to kids and parents. It almost felt like he was one of us out there. As a fan, losing him is devastating. It really is."

At 2 p.m. ET -- right on schedule -- the motorcade carrying Fernandez's body assembled on Felo Ramirez Drive next to West Plaza at Marlins Park. As if on cue, black clouds passed over the stadium, and it began to rain at 2:01. But the rain quickly subsided, and fans lined up with their camera phones to commemorate the occasion. At precisely 2:16 p.m. (in honor of Fernandez's jersey number), the motorcade began to move, and fans chanted "Jose! Jose!" in unison.

Marlins CEO Jeffrey Loria and club president David Samson stood alongside the front of the hearse, and a procession of teammates and club employees walked past. Several Marlins players wore sunglasses, even though the sky was dark.

Fernandez's body was taken to a church in the Coconut Grove neighborhood of Miami to receive a blessing, and then to St. Brendan Catholic Church in Miami for a public viewing from 5 to 11 p.m.

The opportunity to say farewell to Fernandez was cathartic for many fans.

Ralph Lopez, a television production manager from Long Beach, California, took a red-eye, cross-country flight Tuesday night to pay tribute to the pitcher. Lopez first saw Fernandez at Dodger Stadium on May 10, 2013, and was instantly smitten.

"He just had this swagger and this style," Lopez said. "It was captivating. I bought the MLB package so I could follow him. I was jealous of the fans here because they got to see him all the time. I was going to come to a Jose Day to see him, but I never got the chance."

After the motorcade left the area -- among the stops it later made was at a Cuban restaurant Fernandez frequently ate at before games -- Marlins pitchers Tom Koehler and David Phelps stopped by to write personal messages at the West Plaza pillar, where hundreds of fans had said goodbye to Fernandez. The other Marlins soon followed and inscribed their goodbyes on a cement surface that had been painted orange.

Like so many others, they had come to regard Fernandez as a friend.

"That's how Jose was," Keller said. "He never met a stranger."

It has been an emotionally wrenching week for Miami players since they learned of Fernandez's death, which forced the cancellation of Sunday's game against the Atlanta Braves. The Marlins completed a three-game series with a 5-2 loss to the New York Mets on Wednesday and will finish the season this weekend in Washington.

Right fielder Giancarlo Stanton estimated that he has slept a total of about six hours in the three days since Fernandez died.

Each day brings another news development in the aftermath of Fernandez's death.

On Wednesday, U.S. Sen. Marco Rubio sought a safety probe into the rock jetty where a boat crash claimed the lives of Fernandez and his two friends. Rubio, a Florida Republican, sent a letter to the Coast Guard and Army Corps of Engineers asking for a review of the century-old jetty and whether it poses a chronic danger to boaters. The jetty, which extends out from Miami's port, is difficult to see at night, especially at high tide, Rubio said.

As events continue to swirl around them, the Marlins are trying to come to grips with the magnitude of what they've lost. Several Miami players remarked on what an emotional jolt it was to see Fernandez's coffin before the drive to the church.

"You've got a 24-year-old who's on top of the world, and [suddenly] we're walking behind his hearse," Koehler said. "We're watching Miami's hero ride down the street. Unfortunately, everybody in this clubhouse is now connected by a bond that can't be broken.

"We're being forced to grieve in public. I appreciate every one of those fans that came out today and supported Jose and us. But it didn't make it easier." 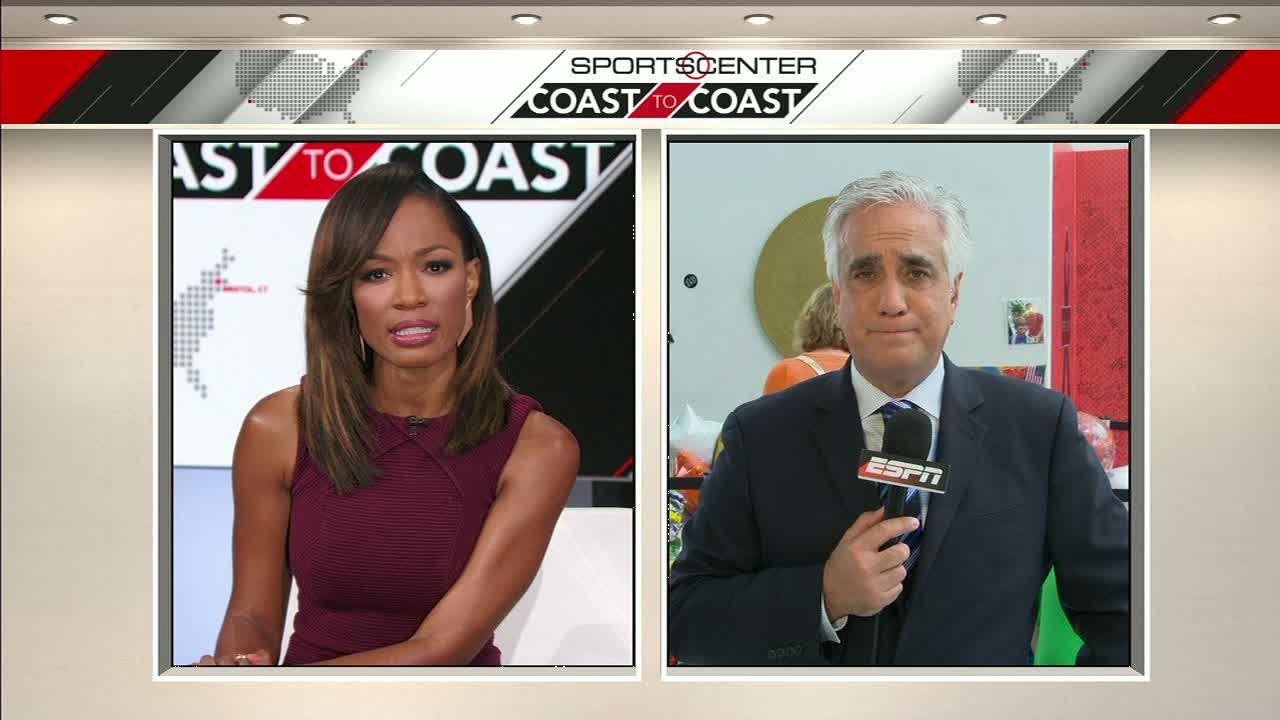 Miami community having hard time coping with Fernandez's death
Pedro Gomez explains the impact Jose Fernandez' death is having on both the English and Cuban communities in Miami because of how he transcended both groups of people. 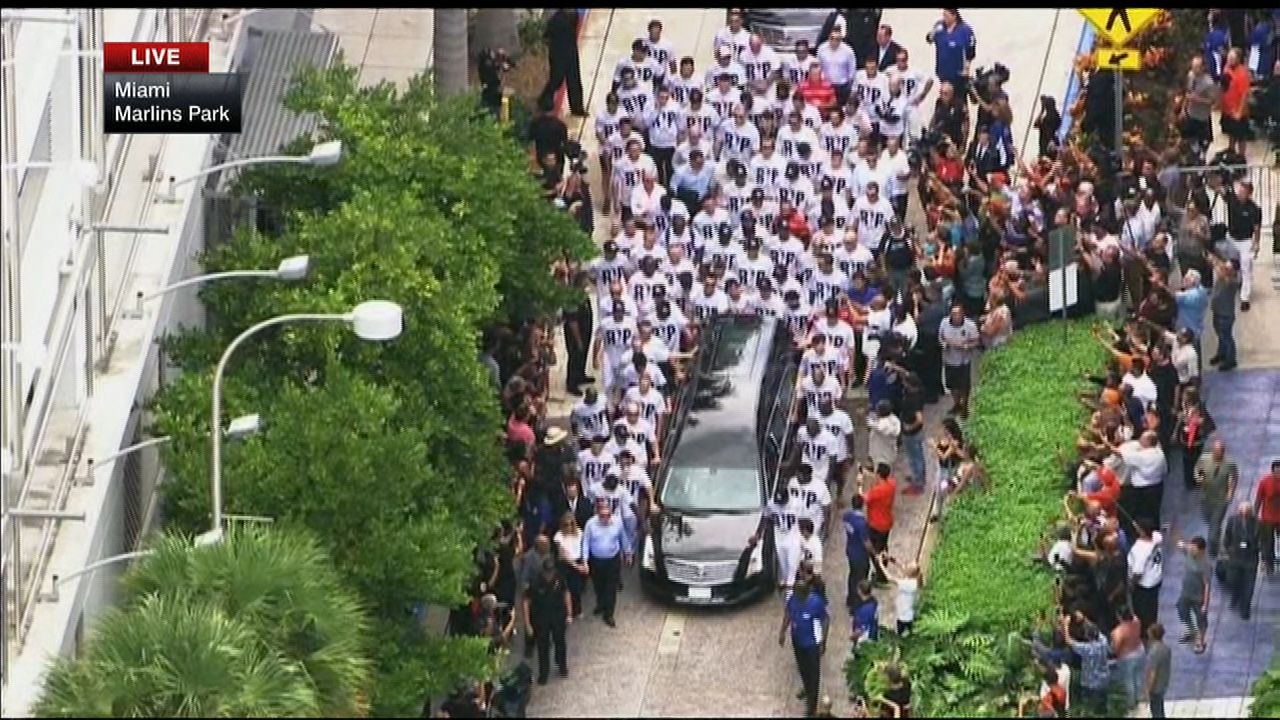