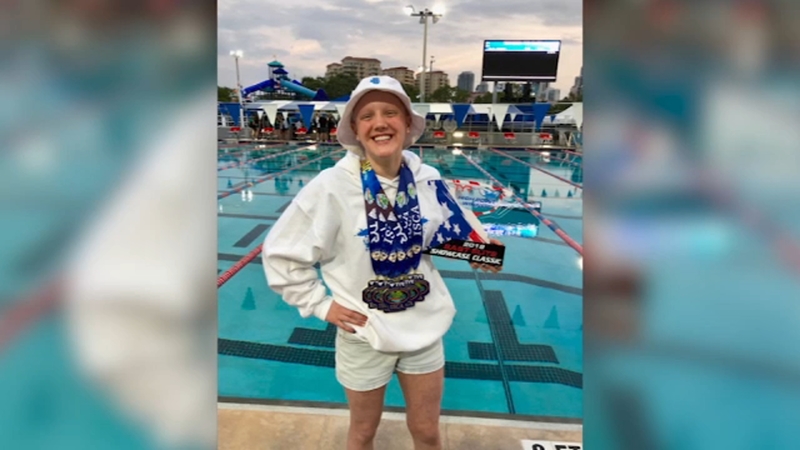 SUGAR GROVE, Ill. (WLS) -- With the Summer Olympics in Tokyo just six weeks away, it's now "make or break" time for American athletes who have been waiting to earn a spot on Team USA.

One of those athletes is an incredible teenager from west suburban Sugar Grove.

Leah Hayes may only be 15-years-old, but Sunday, she will be trying to make her Olympic dreams come true when she makes her Olympic trial debut in Omaha!

"She is on fire when she races," said Fox Valley Riptides Coach Nancy Hooper.

Coach Hooper knew Hayes had "something" when she spotted her swimming seven years ago. Hooper has coached her ever since and it didn't take long to see "greatness!"

"It is so hard to set a national age-group record," Coach Hooper said. "What that means is, in the history of the event, no one has swam it faster!"

Now, this proud member of the Fox Valley Riptides is setting her sights on the event that could land her on the world stage.

"It's been my dream since I began swimming! Five years ago, I was watching the trials and now, I'm going to be participating in them. I'm really excited," Hayes said.

Her Riptide teammates helped boost that excitement level a little more this past week with a surprise send-off.

Leah has also overcome a lot, not just in the pool. She was diagnosed with alopecia at just 7-years-old. It's a condition she never concealed from her supportive "swim family."

"We just made sure we were always positive and swimming was a great outlet for her because the swim team here, they don't give her a second look. Well, now they do, because of her abilities," said her dad.

"To watch her have that strength to deal with that challenge, it made her a stronger person, clearly in sports as well," Coach Hooper said.

But now, it's just all about putting out her best when she gets into that pool.

"The whole event is just so amazingly exciting and she is ready for it, she is ready to be there," Coach Hooper said.

"She amazes me every time she gets in the pool," said Hayes' mother Jill. "So honestly, anything is possible."