Tennessee gets past Kentucky to make U.S. title game at LLWS 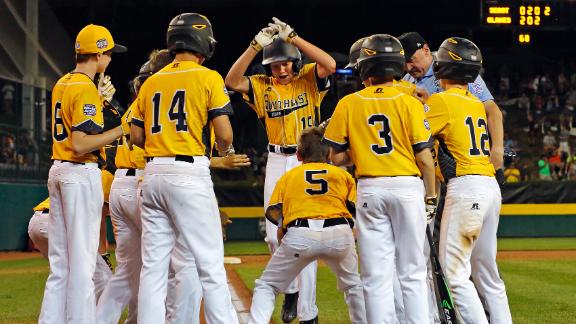 McWilliams' smash over the center-field wall gave Tennessee a 6-4 lead. Moore struck out the side in the fifth, and he retired Devin Obee with two on in the sixth for the final out.

Ryan Oden added two RBIs for Tennessee. His RBI double in the second pulled Tennessee to 2-1, and he scored on a wild pitch to tie it. His sacrifice fly to right scored Carson Rucker to make it 7-4 in the fourth.

Kentucky had runners on the corners with two outs in the bottom of the fourth, but Tennessee catcher Tanner Jones threw out Obee trying to steal second.

Kwon hit a solo shot over the left-center wall to give Seoul a 1-0 lead in the first inning, and he hammered the first pitch he saw in the second for a two-run homer.

Jaekyeong Kim homered with two on in the second, and Yoomin Lee came home on a wild pitch in the fourth.

Park was replaced in the fourth after throwing just 48 pitches in order to stay eligible to pitch Sunday. Wontae Cho didn't allow a hit in two innings of relief.

Gael Isaac Cortez singled up the middle in the first inning for Mexico's only hit.