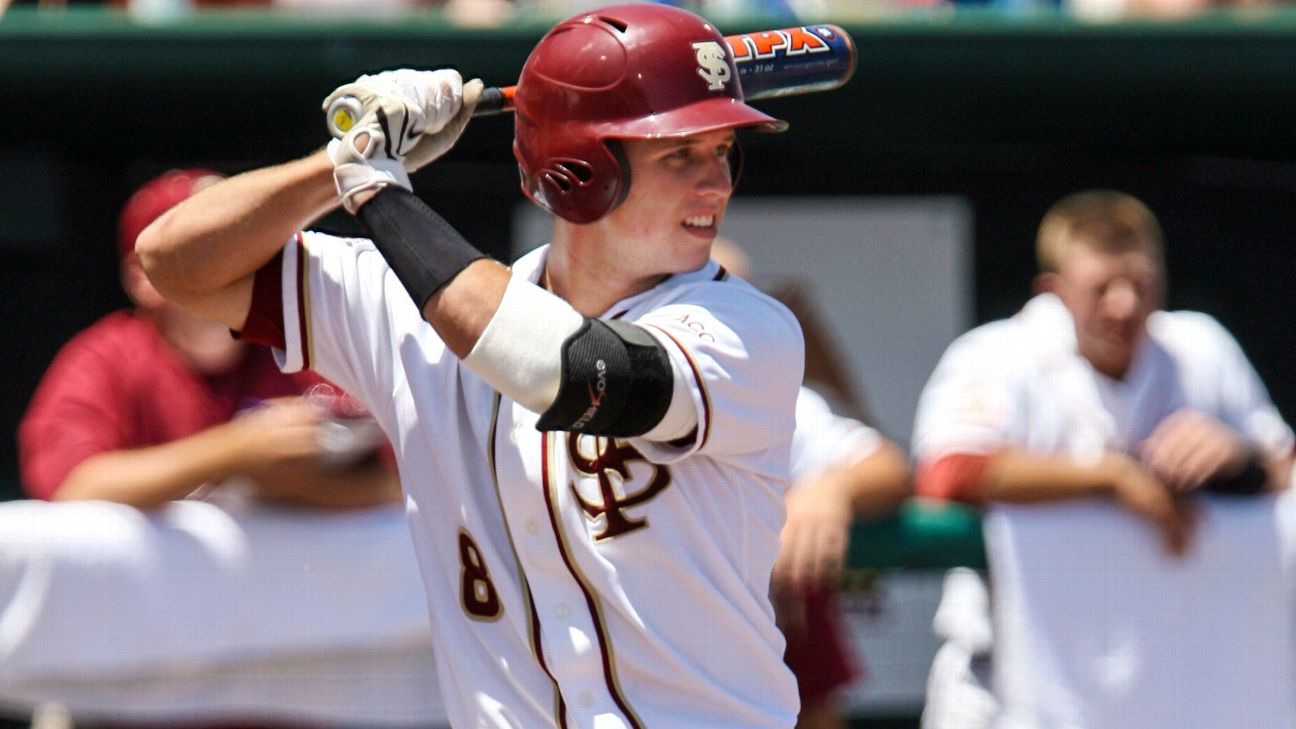 The College World Series is going on this week in Omaha, Nebraska, and it's our annual reminder that this great game is popular on so many levels beyond the major leagues. Some of the players you'll see this week will make the majors, and a few will become stars. Some of them will get drafted (or were just drafted) but will fall short of the majors. For many, this will be the highest level of baseball they'll reach.

Here's a 25-man roster of the best active major leaguers who appeared in the College World Series (based on their pro performance, not how they did in the CWS).

C -- Buster Posey, Florida State (2008). Posey began his collegiate career as a shortstop, transitioned to catcher and had a monster junior season in 2008, hitting .463 with 26 home runs. Somehow he fell to fifth overall in the draft. The Seminoles have a rich baseball history with 22 CWS appearances, tied for third most behind Texas (36) and Miami (25), but they've never won a title.

1B -- Brandon Belt, Texas (2009). Belt was drafted by the Red Sox out of high school and by the Braves out of junior college before spending two seasons at Texas, where he eventually gave up pitching and focused on hitting.

2B -- DJ LeMahieu, LSU (2008, 2009). LeMahieu made the All-Tournament team in 2009, when he helped LSU win its sixth national title by knocking off Belt's Texas team in the best-of-three championship series.

SS -- Dansby Swanson, Vanderbilt (2014, 2015). Swanson was the Most Outstanding Player of the CWS as a sophomore, then became the No. 1 pick in the 2015 draft. He has a chance to become the rare MOP who actually has a long MLB career.

OF -- Andrew Benintendi, Arkansas (2015). His hometown Reds drafted Benintendi out of high school, but he went to Arkansas, where he hit one home run as a freshman. He then exploded as a draft-eligible sophomore, hitting .376 with 20 home runs, and the Red Sox snagged him with the seventh pick in 2015.

OF -- Jackie Bradley Jr., South Carolina (2010, 2011). The center fielder on South Carolina's back-to-back CWS champions, Bradley was the tournament's MOP as a sophomore in 2010.

DH -- Kyle Schwarber, Indiana (2013). Schwarber headlined Indiana's only CWS appearance, hitting .366 with 18 home runs as a sophomore. Sam Travis also was on the team and became a second-round pick in 2014, with Schwarber going in the first round.

C -- Mike Zunino, Florida (2010, 2011, 2012).Zunino followed in the footsteps of his dad, Greg, who played in the 1980 CWS with Cal. Zunino was the cornerstone of some loaded Gators teams that made three straight trips to Omaha, with a runner-up finish to South Carolina in 2011 their best result.

UT -- Chris Taylor, Virginia (2011). Two-way threat Danny Hultzen was the star of the 2011 Virginia team and went second overall to the Mariners, who would draft Taylor in the fifth round the following year.

3B -- Kyle Seager, North Carolina (2007, 2008, 2009). In college, Seager played second fiddle to teammate Dustin Ackley. The Mariners drafted Ackley second overall in 2009 and Seager in the third round. Ackley's MLB career fizzled, while Seager has become a fixture in Seattle.

OF -- Michael Conforto, Oregon State (2013). Jacoby Ellsbury, another Oregon State outfielder who played in the 2005 CWS, has had the longer career, but Conforto is the guy you'd want now, even though he has struggled some in his return from shoulder surgery.

Aaron Nola, LSU (2013). Nola went 23-2 his sophomore and junior seasons with ERAs of 1.57 and 1.47. His only loss as a sophomore came in the CWS, a 2-1 defeat to Adam Plutko and UCLA. (Plutko would go on to win MOP honors as UCLA beat Mississippi State in the final.)

Gerrit Cole and Trevor Bauer, UCLA (2010). The Bruins made the final against South Carolina, but the Gamecocks blew out Cole in the first game and then won 2-1 in the second game. With this pair as juniors in 2011, the Bruins didn't even make the CWS, even though Cole would go first overall in the draft and Bauer third.

Michael Wacha, Texas A&M (2011). Wacha went 27-7 in his college career and was the 19th overall pick in 2012 (in a pick the Cardinals got from the Angels for losing Albert Pujols).

Sonny Gray, Vanderbilt (2011). Gray went 12-4 with a 2.43 ERA as a junior, pitching Vanderbilt into its first College World Series. He is part of a rich Vanderbilt pitching tradition that includes eight first-round picks since 2007.

Walker Buehler, Vanderbilt (2014, 2015). Here's another one. Buehler had a stellar three-year career at Vanderbilt but fell to 24th in the draft because of concerns about his elbow. Sure enough, he had Tommy John surgery. But he has recovered and has a 2.63 ERA in nine starts with the Dodgers (although he's currently on the disabled list with a microfracture in his ribs).

Dallas Keuchel, Arkansas (2009).The Houston Astros made Keuchel a seventh-round pick after he went 9-3 with a 3.92 ERA for a Razorbacks team that made a deep run in 2009. That junior season for Keuchel was the best of three years that hardly screamed 'future Cy Young winner' as he posted a 5.88 ERA as a freshman followed by a 4.58 mark as a sophomore in the very tough SEC.

Mike Leake, Arizona State (2007, 2009). Leake was so polished coming out of college that he jumped straight to the Cincinnati rotation in 2010 without pitching in the minors.

RP -- Andrew Miller, North Carolina (2006). The Tar Heels featured six future major league pitchers in 2006 but lost in the final to Oregon State (and would lose to the Beavers in 2007 as well).

RP --Justin Wilson, Fresno State (2008). And our next guy is ... Justin Wilson. Fresno State beat Georgia in an all-Bulldogs final series, and Wilson started the finale, allowing just one run in eight innings.