The best trolls of the 2021 college football season 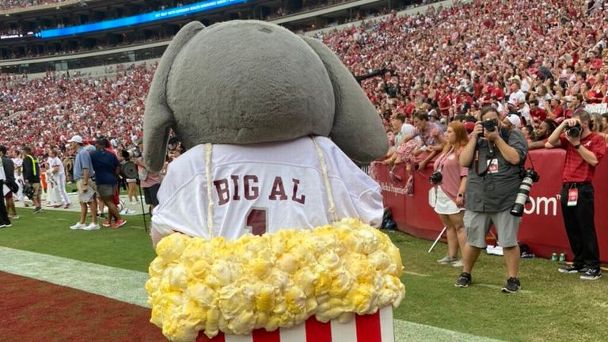 Plenty of adjectives can be thrown out to describe the 2021 college football season. Wildly entertaining, exhilarating, hectic. Maybe one could even say historic?

Those are all viable options, but these two words could also summarize this year on the college gridiron: Terrifically trolled.


Playful (and sometimes personal) jabs thrown at opposing teams have become a mainstay in college football. Many universities flex their social media muscles with memes, GIFs and creative graphics to antagonize their foes.

Even the College Football Playoff National Championship had some social media action.

Let's relive some of the more memorable instances of trolling from the 2021 season.

This season's chapter of Nick Saban and Lane Kiffin's well-documented relationship was not short on entertaining antics. However, most of the interesting action occurred off the field as Bama's decisive 41-21 win over the Rebels was far from a nail-biter.

On the Crimson Tide's sideline, Big Al, dressed as a Loki variant, marveled at the scoreboard.

The mascot's next costume was a direct response to Kiffin's pregame interview. Kiffin later apologized for saying "Get your popcorn ready," but not before Big Al made another bold fashion statement.

After battling Brutus the Buckeye earlier in the season, the Oregon Duck, one of college football's most beloved mascots, took internet trolling to another level at the expense ofWashington's mascot, Harry the Husky.

The Duck heckled Harry all week, starting with theOregonmascot impersonating Harry's Twitter account. While pretending to be the Husky, the Duck posted plenty of tweets praising his school, and even posted a photo of Washington's mascot dressed in an Oregon football jersey.

After reverting back to his own account days later, the Duck continued with the jabs at Harry until game day -- and then left a final reminder for the Husky after his team beat Washington 26-16.

The Civil ConFLiCT trophy went missing in October 2016. While the whereabouts of the original trophy remain unknown, UCFdebuted a new piece of hardware, much to the chagrin of UConn.

The Huskies threw some shade ahead of the game, but the Knights had the last laugh.

Michiganvs. Michigan Stateis one of the fiercest rivalries in college football. Tennessee Titans offensive tackle, and Wolverines alum, Taylor Lewan gave a passionate speech about his alma mater's chances against its in-state rival before the game.

But after Michigan State rallied from 16 down in the second half to beat Michigan, the Spartans' social media page made sure Lewan ate the words he said just days prior.

Although Stanfordfinished the regular season 3-9, one of those wins came against then-No. 3-ranked Oregon in Week 5.

The Ducks had a 99.9% chance of winning with under two minutes left in the game. Then chaos ensued, as the Cardinal scored a touchdown on an untimed down during the game's final drive to tie the game. In overtime, Stanford scored on the opening possession and stopped Oregon's offense on its first drive to secure the 31-24 victory.

Nike is the apparel sponsor for the Ducks, and its founder, Phil Knight, is Oregon's biggest booster. The Cardinal's Twitter account used the company's famous "SNKRS" app to rub in the top-10 upset a little more after the contest.


Ohio Stateand Michigan met for "The Game" on Nov. 27, and the Wolverines dominated with over 200 yards rushing as a team and a five-touchdown performance from Hassan Haskins. Their 42-27 win over the Buckeyes was head coach Jim Harbaugh's first in the rivalry since he was hired in 2015, and Michigan's first against Ohio State in a decade.

As the postgame celebrations took place, the Michigan police department offered some traffic advice for departing travelers via its Twitter account. It also managed to land one final jab at Ohio State too.

Tennessee Volunteers fans expressed their displeasure by throwing objects on the field in the final minutes against Ole Miss. The game was paused for about 20 minutes and Rebels coach Lane Kiffin was struck by various items, including a mustard bottle.

Ole Miss' social team had a lighthearted response to fans in Knoxville littering the field.

Unofficially billed as the "Manning Bowl," bragging rights weren't the only thing at stake when the alma maters of Peyton and Eli Manning clashed.

Ahead of the game, Eli offered a friendly wager to his older brother.

On the Mannings' next Monday Night Football telecast, Peyton held up his end of the bargain.

This was a reunion game for Notre DameQB Jack Coan, who was the starter for the 2019 Wisconsin Badgers team that reached the Big Ten championship. Unfortunately, Coan exited early with an injury, but freshman Drew Pyne picked up right where the graduate transfer left off.

An impressive offensive effort and dominant defense allowed Fighting Irish to cruise to a 41-13 victory.

Notre Dame's social media reveled in the win with a post that poked fun at Wisconsin's "Jump Around" tradition.

Virginia Tech's "Enter Sandman'' is one of the most popular entrances in college football, but Notre Dame continued its habit of spoofing well-known traditions.

After getting benched for his play in the first quarter, Coan redeemed himself in the game's final act. With 2:26 remaining, Coan & Co. cashed in on a touchdown and 2-point conversion to tie the game at 29 points apiece. The Hokies' offense went three-and-out in 30 seconds on the next drive.

Coan and the Fighting Irish drove 45 yards in seven plays to set up the go-ahead field goal.

The two teams met in Week 12 of this season, and WVU came out on top 31-23, knocking the Longhorns out of bowl game consideration.

After the game, wide receiver Bryce Ford-Wheaton posted a photo of Sills making the infamous "Horns Down" sign and got a shoutout from his fellow Mountaineer.

Arizona Statemanaged to erase a 14-point deficit en route to a 5-point victory over Washington in Week 10.


The momentum shift came from the Sun Devils' 20-play, 81-yard drive that lasted over nine minutes and resulted in a touchdown.

They subtly trolled their fellow Pac-12 foe after completing the comeback.

In Week 11, Kansasexorcised a lot of demons against Texas. It snapped an eight-game losing streak, a 56-game losing skid to Big 12 opponents and won for the first time in Austin, Texas.

The Jayhawks had many tweets that summed up their upset win, but this one using a scene from the hit TV comedy "The Office" perfectly described the team's mood that day.

Missouri's trolling was at its best after it defeated Floridain a 24-23 thriller. For those who don't know, former Gators head coach Dan Mullen wore a Darth Vader costume to the news conference after his team defeated the Tigers in 2020.

Missouri didn't forget a year later, as its Twitter account reminded Florida about the positive powers of "The Force."

Even Tigers head coach Eli Drinkwitz got in on the action, putting up his hood Jedi-style and brandishing a toy lightsaber as he left the postgame news conference.

Mizzou was also on the receiving end of a social media barb, courtesy of Boston College. It started when Drinkwitz commented on the matchup from an entertainment and recruiting perspective early in the week.

"If I had my pick of it, I would love to play a regional matchup that was maybe more of a rivalry game that would be maybe a little bit more exciting for recruits to watch from a TV perspective ... I don't know the last time Missouri signed a kid from the great state of Massachusetts," Drinkwitz said per Saturday Down South.

The road trip didn't end well for Tigers, as they fell to the Eagles 41-34. Boston College's social media team used a meme of Michael Jordan from ESPN's "The Last Dance" to show how it felt about Drinkwitz's words.

In the 2021 Outback Bowl, Arkansasscored 17 points in the third quarter and shut out Penn Statein the second half en route to a 24-10 victory. The team dominated the Nittany Lions on the ground, rushing for 353 and three touchdowns.

The Razorbacks used this bowl game's sponsor, Outback Steakhouse, for their Australian-inspired troll job. They used a clip from the movie "Kangaroo Jack" to display how their football squad took down its opponent.

Cincinnati's season was historic on many fronts, and defeating a then-top-10 team in Notre Dame was a statement victory. It's even better when it comes against the coach who left your school to coach his current (now former) one.

Brian Kelly coached the Bearcats to a 34-6 record from 2006 to 2009, but left for Notre Dame, which didn't sit well with Cincy players at the time. After Cincinnati secured the 24-13 win in Week 5, the school brought back a poignant quote Kelly said when introduced in 2006 back to social media as a reminder of which school "is the place to be."

Turns out neither school is, as Kelly is now the head man at LSUafter inking a 10-year, $95 million deal in December.

Michigan State used comic book covers to preview its games against opponents, and some of them turned out to be prescient. Take these artistic illustrations of Sparty against the mascots from Maryland, Michigan and Penn State.

Other times, they weren't -- as these covers featuring Purdue and Ohio State demonstrate. Michigan State lost those two games by a combined score of 96-36. 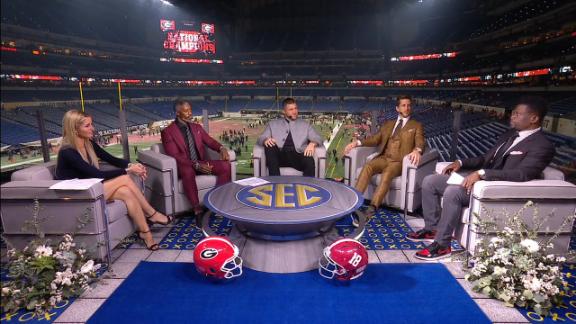 Is Alabama or Georgia the team to beat next season?
The SEC Now crew explains the "sky is bright" for the Tide next year by the best offensive player and defensive player in college football returning to the program. 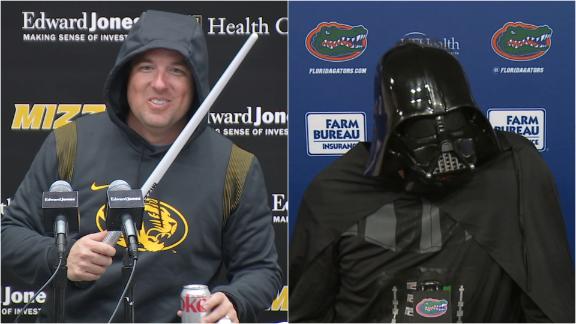