The Blackhawks have fallen; here's how they will get back up 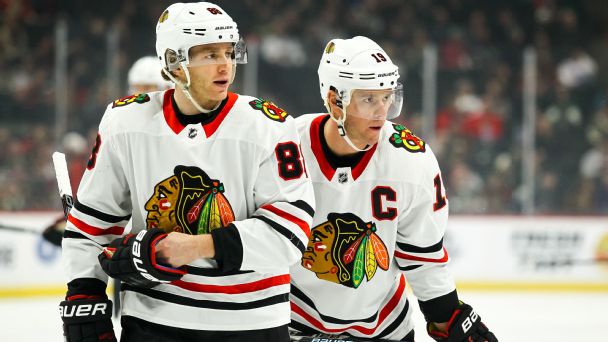 ESPN
By Emily Kaplan
CHICAGO -- For much of the season, conversation surrounding theChicago Blackhawkshas been filtered through the lens of what they are not. They are not the team we have become used to seeing over the past decade: ruling the Central Division and storming their way to the postseason.

So it is probably more productive to assess the Blackhawks for what they are, 57 games into the season. If you divorce the drama from the day-to-day minutiae, you'll notice a team that has transformed before our very eyes. The Blackhawks have become younger and faster since the season began, transitioning on the fly so they don't have to pull a complete reset this offseason. "We notice the speed,"Calgary Flamescoach Glen Gulutzan said last week. "When you get on the ice, you're not sure who they are the first time you play them. Then you certainly have to prepare for them. They've done a good job of bringing some of these young guys along."

Although they have not waved the white flag yet, there are signs that the Blackhawks are beginning to understand that this might not be their season -- GM Stan Bowman said on NBC Sports Chicago last week that he did not expect to be a deadline buyer. But if the Blackhawks play their cards right from now through the offseason, they can squeeze another run out of the core that already won three Cups.

But there's another thing you need to understand about these Blackhawks: They aren't asking for pity, and they're certainly not getting any around the league. Last week, before theDallas Starscompleted their first season sweep of Chicago in 11 years, Dallas coach Ken Hitchcock was asked if he could empathize with Blackhawks coach Joel Quenneville. Hitchcock was incredulous.

"Empathize with Joel Quenneville?" Hitchcock said. "He can give me his rings all he wants. I don't give a damn. Competition is competition. He's had his day in the sun. He's a great coach, but you can't feel for anybody. Those are the things you can do in the summer, when you get together, you talk to a guy on the phone, when he's facing personal adversity. But during competition, you're in your own group, and you hope the other group fails like crazy."

When Crawford last played on Dec. 23, the Blackhawks were well within playoff striking distance. Crawford, who has begun skating only recently after being away from the team with post-concussion symptoms, was having a Vezina-caliber season (16-9-2, .929 save percentage, 2.27 GAA). Chicago has yet to find a replacement who can fill his pads. The Blackhawks turned toJeff Glass, a 32-year-old rookie who toiled for nine years in the KHL, and 25-year-old Anton Forsberg, another return from the Panarin trade, who still needs seasoning. Glass and Forsberg have posted.898 and .907 save percentages, respectively, which, among goalies with at least 10 starts, rank 53rd and 46th in the league.

In truth, the Blackhawks' roster had a lot of holes that Crawford's stellar play masked. The team misses Marian Hossa, a stalwart on the three Cup teams who scored 26 goals last season, but is on long-term injury reserve with a potentially career-ending skin condition. Seabrook, who carries the league's 10th-highest cap hit among blueliners, at $6.85 million, is having an off season. He was benched for a game on Jan. 9. On offense, Saad was brought back to recapture chemistry with Toews, but the top-line trio of Saad, Toews and a slumping Richard Panik fizzled early.

This triggered change. The Blackhawks unloaded their Panik problem on Arizona, trading the winger for 22-year-old Anthony Duclair, a once-touted prospect with tremendous speed. They gave up on the Saad-Toews pairing (for now), promoting scrappy rookie Alex DeBrincat to the top line, where he thrived, with five goals in his six games, before being shuffled again. DeBrincat tends to elevate his play when he is surrounded by elite players. Vinnie Hinostroza, known mainly for his speed, also earned a regular lineup spot.

Midway through the season, the Blackhawks found themselves with a logjam of defensemen. Management was pleased with how youngsters such asGustav Forsling, Jordan Oesterle andJan Ruttawere coming along. That pushed venerable veteran Cody Franson to the AHL. Even when the 21-year-old Forsling hit a wall and needed to be sent down to Rockford, the Blackhawks remained committed to the youth plan. Forsling's replacement has been 25-year-old Erik Gustafsson. When Rutta was placed on injured reserve last week with an undisclosed injury, Chicago promoted 23-year-old Carl Dahlstrom.

During one recent stretch, 14 consecutive Blackhawks goals were scored by players under the age of 23.

"When you've got the leadership and the core there, they can bring in people and fit them in and develop," Gulutzan said. "When you've won as much as they have and have as much character as they have, you can bring those guys in, and now they're contributing. We think they're a really fast team to play."

The Blackhawks are really fast? That probably isn't something you would have heard when their season started on Oct. 5.

It's impossible to talk about the Blackhawks without mentioning the two players most associated with their turnaround from bottom-dwellers to three-time champions: Patrick Kane and Toews. They are both 29 and under contract through 2022-23. Kane is having another strong statistical season (53 points in 57 games); he has not missed Panarin as a sidekick, instead developing chemistry with Nick Schmaltz. Toews' season has been a bit trickier. The scoring hasn't been there (36 points), but the captain's presence goes beyond stats -- and his 58 percent faceoff win rate is significant.

Toews has been hampered by some bad puck luck. It's not an excuse, just an observation. You can feel his exasperation especially after he hits iron twice, like he did in a game last week against the Calgary Flames. "I mean, I don't know. I don't know what to say right now," Toews said after that game. "I mean, it's pretty frustrating that we played pretty good hockey at times. Had a lot of good chances, should be able to find ways to win games, even if we give up two or three."

That's the thing. The Blackhawks haven't been terrible this season -- just not their dominant selves. Opposing players continually tell me that Chicago is one of the toughest teams to face. It's a great possession team (53.3 percent Corsi rating, third-highest in the league) and has the most offensive zone starts in the league. The Blackhawks are hovering around the league average in goals per game, with 2.81. Things just haven't gone their way. For example, Duncan Keith leads the league with the most shots taken (137) without actually scoring a goal.

If a miracle run this season doesn't pan out, Chicago will shift its focus to 2018-19. With so many young players gaining experience this season, the Blackhawks might need only to tweak their roster this offseason. Chicago's prospect with the most upside is 2017 first-round pick Henri Jokiharju. ESPN's prospect expert Chris Peters told me it might be asking a lot of the 18-year-old defenseman to be NHL-ready next season, but the Blackhawks could ease him in like they did with Nick Leddy in 2010.

Regardless, Chicago is not in the same dire situation as the Rangers, who admitted last week that they likely need to overhaul their roster before they contend again.

Earlier this season, I talked with Bowman about how far the Blackhawks had come, from league cellar-dwellers to three-time Cup champions. The theme of our conversation, however, quickly turned to what happens when a franchise finds success and must figure out how to sustain it.

"It's not easy," Bowman said. "You have to have some good fortune, no question. Things have to go your way. You also have to do a good job of identifying talent, developing talent and making hard decisions. In our case, we've had to move a lot of good players along, [guys] who maybe weren't superstars but who we'd love to keep. But in the system we're in, you can't get married to, like, 15 players. You can pick your five, six or seven guys and be all-in on those guys. And then you have to move other guys when you don't want to. If you're willing to do that and have a good pipeline of talent coming, then you have a chance to sustain it -- a chance."

The Blackhawks are not a lot of things this season. But it does feel like they are a team with a plan.
Report a correction or typo
Related topics:
sportsespnchicago blackhawksnhlchampionshipsscotty bowmanjonathan toewsstan bowmancorey crawfordbrent seabrookalex debrincatjoel quennevillestanley cuppatrick kane
Copyright © 2020 ESPN Internet Ventures. All rights reserved.
More Videos
From CNN Newsource affiliates
TOP STORIES