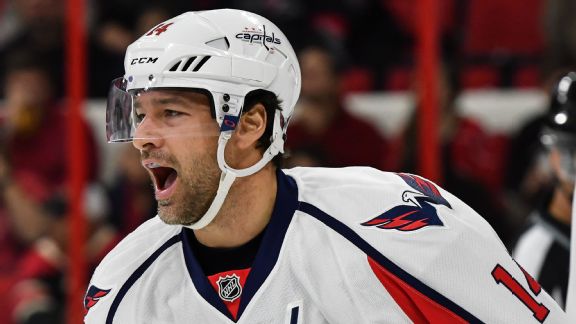 ESPN
By Tal Pinchevsky
For the first time in three years -- and just the second time since 2009 -- all four second-round series in the Stanley Cup playoffs will go at least six games. That sets the stage across the hockey landscape for some pretty compelling drama. And, as with most dramas, a few heroes will emerge to etch their names in NHL history.

Any rostered player still playing in the playoffs has an opportunity to be that hero. But a scan of recent playoff history reveals that certain players have been more prolific than most when it comes to seizing the moment on hockey's biggest stage.

Here are five players who have been the true kings of clutch when their teams needed it most:

The nickname "Mr. Game 7" isn't just handed out every few years. Williams, a three-time Stanley Cup winner, has earned that moniker. He owns the record for most points in Game 7s, with 14.

He's been no slouch in Game 6, either. The Capitals will certainly be counting on his big-game experience as they face elimination -- again -- in Game 6 of their second-round series against the Pittsburgh Penguins on Monday at 7:30 p.m. ET.

In his first Game 6, as a member of the Philadelphia Flyers in 2003, Williams scored the winning goal and added two assists against the Toronto Maple Leafs. He has only continued to provide those timely performances since 2012, when he won the first of two Cups with the Los Angeles Kings.

Since the start of the 2013 playoffs, Williams has recorded four goals and three assists in four Game 7s. His Game 6 exploits are an equally impressive -- seven goals and eight assists in 11 games. That clutch postseason play is one of the main reasons the perennial postseason-underachieving Capitals signed Williams as a free agent in 2015.

When you score a Cup-winning overtime goal at age 21, the bar for playoff heroics is set ridiculously high. Yet somehow Kane has continued to top himself, delivering one clutch performance after another since he netted that OT winner in Game 6 of the 2010 Stanley Cup finals against the Flyers.

Since the start of the 2012 postseason, no player has more game-winning playoff goals than Kane (10). The winger's four postseason overtime goals since then are also tops in the league. Those big-time performances have come at the most opportune of moments for one of hockey's most exciting players. Like his series-clinching hat trick in Game 5 of the 2013 Western Conference finals against the Kings. Or his combined two goals and three assists, including one game-winner, in Games 6 and 7 of the the 2014 Western Conference finals, which Chicago ultimately lost to Los Angeles.

Of course, the Blackhawks' last Cup run, in 2015, wouldn't have happened without Kane, who in four combined Game 6s and 7s contributed three goals and six assists.

Kyle Turris' overtime goal against the Rangers in Game 5 on Saturday put the Ottawa Senators one win away from advancing to the Eastern Conference finals -- and New York on the brink of elimination. But if the Rangers have one reason to remain confident heading into Game 6 on Tuesday, it's their goaltender's history in make-or-break games.

Since the start of the 2012 playoffs, no goaltender has proven more reliable with the season on the line. In that span, Lundqvist boasts a 15-5 record in elimination games, with two of those losses coming in overtime. His save percentage in those games is an eye-popping .945, which rises to .953 if you don't count the blowout 6-3 season-ending loss he sustained last year in Game 5 of the Rangers' first-round series against the Penguins.

During the Penguins' championship run last season, only Sidney Crosby had more than Bonino's two game-winning goals. But signs of Bonino's ability to shine on the biggest stage were visible when he broke into the league with theAnaheim Ducks. Bonino's 12 combined points during the 2012 and 2013 playoffs with the Ducks were third on the team behind All-Stars Ryan Getzlaf and Corey Perry, and his three game-winners during those two postseasons were two more than the next-closest Duck.

Although the injury-riddled Lightning missed the playoffs this season, Johnson's seven game-winners are still the most of any player since the start of the 2015 postseason. That feat is made even more impressive considering Johnson ranks 24th in the league with 93 playoff shots during that span.

The speedy forward has also managed to save his best performances for when his team needs them most. When the Lightning lost the opener of their second-round series against the New York Islanders last year, Johnson responded with a two-goal, one-assist outing in Game 2. When the Penguins took a 2-1 series lead against Tampa Bay in the Eastern Conference finals that same postseason, Johnson scored consecutive game-winners in Games 4 and 5.