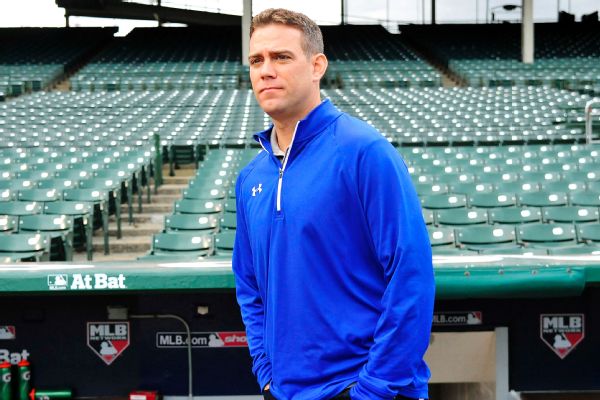 ESPN
By Jesse Rogers
CHICAGO --Chicago Cubspresident Theo Epstein isn't wavering from his contention his team will turn things around soon, and that includes leadoff hitter Kyle Schwarber, who's hitting .187 after Tuesday's win against the Cincinnati Reds.

"He hasn't gotten on track yet but we have no doubts that he will," Epstein said Tuesday afternoon. "If anyone wants to sell their Kyle Schwarber stock, we're buying.

The Cubs open a 10-game homestand on Tuesday after a 2-4 road trip that dropped them below .500 (18-19) for the first time this late in a season since the end of 2014. Playing at Wrigley Field has been no guarantee this year either as they're just 7-9 at home.

"There's no panic but there's a lot of guys that care about playing up to our capabilities," Epstein said. "You never know where the bottom is or what catalytic event is going to be that turns things around."

A lot of the focus lately has been on the Cubs' lineup as it is collectively slumping while dealing with some nagging injuries. World Series starters from a year ago Jason Heyward, Ben Zobrist, Kris Bryant and Addison Russell all missed time on the road trip, but it's Schwarber who is taking the brunt of the abuse by both fans and media. The Cubs tabbed him as their leadoff man to replace Dexter Fowler but it's not clicking right now. His on-base percentage is just .313 going into Tuesday's game, prompting a reporter to ask what it would take to send the slugger to Triple-A.

The Cubs are taking the same approach with their entire lineup, which is ranked eighth in runs in the National League but last in hitting with runners in scoring position. Epstein indicated only his MVP, Kris Bryant, is hitting up to his capabilities.

"It's not going to last, at all," Epstein said. "What it tells me is we're going to have five or six guys get hot at the same time."

Epstein is even optimistic about pitcher Jake Arrieta, whose 5.44 ERA ranks him 73rd in the NL among pitchers who have started at least one game. Arrieta's fastball has been down 3-4 mph all season.

"He hasn't locked in his delivery yet," Epstein said. "When he does things will be different."

The overall message was not to panic. The Cubs certainly aren't, not 37 games into the season. Epstein expects better but can't say exactly when that will happen.

"There is no lack of urgency, there is no complacency because we won last year," Epstein stated. "There's just frustration because we haven't gotten there. There's no panic.

"I'm not blind to what's gone on but you also have to trust in what you believe."

Right now the Cubs believe in their team without question, but already Epstein is fielding questions about trade talks which will pick up after the June. He'll be in the market for some starting pitching no matter how much things turn around -- which he's sure they will.

"Like Schwarber, if people want to sell low on the Cubs we'll buy," he said. "The season is 162 games for a reason. It tends to be a meritocracy over 162."
Related topics:
sportsespnmlbkyle schwarberjason heywardaddison russelljake arrietaben zobristkris bryantchicago cubsdexter fowler
Copyright © 2020 ESPN Internet Ventures. All rights reserved.
More Videos
From CNN Newsource affiliates
TOP STORIES