Thibodeau: Rose will clear this hurdle 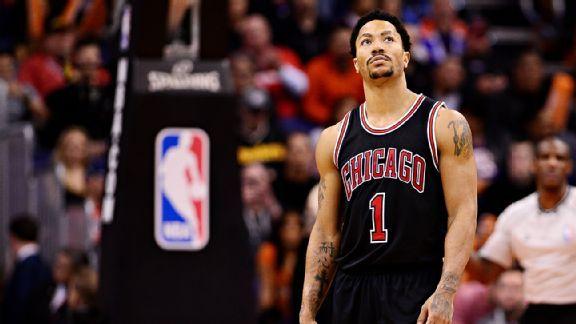 CHICAGO -- Less than a day after they announced that Derrick Rose again would need surgery on his right knee, the Chicago Bulls remained shocked and sympathetic.

"I don't know what to say other than it's just so unfair," Bulls coach Tom Thibodeau said after the team's morning practice ahead of Wednesday night's home game against the Charlotte Hornets. "A guy's been through so much and you know what he's put into it. This one, any time you have surgery it's tough, but hopefully this one will be much shorter than the other ones."

The Bulls announced Tuesday night that Rose had torn the medial meniscus in his right knee for the second time in 15 months and would need surgery.

The star point guard's status is up in the air until a surgery is scheduled.

Some within the organization are clinging to hope that a Rose return in the six-week range remains feasible, but the Bulls have been adamant in their public comments that they don't want to speculate on potential recovery timetables until the surgery is complete.

It will be Rose's third knee surgery since 2012, starting when he went down with an ACL tear in his left knee in the first game of that year's playoffs. He tore the meniscus in his right knee in Portland in November 2013 and missed the remainder of last season.

This time, Rose didn't go down on the floor like his previous two injuries. He spoke with reporters after Monday's game, an 87-71 win over the Milwaukee Bucks in which he missed 12 of 13 shots.

Rose, who is averaging 18.4 points and 5.0 assists in 31 minutes per game, sat out Tuesday's practice with "lower-body soreness." Then he underwent an exam, and an MRI revealed the news.

"I'm still shocked," Bulls guard Kirk Hinrich said Wednesday. "I didn't have any idea he had an injury like that yesterday in practice. I just feel for him. I can't imagine what he's gone through these last three years. Just when it seems like he was hitting his stride, playing great, it kind of felt like he put it behind him. For this to happen is just devastating."

Added Bulls All-Star Pau Gasol: "Heartbreaking, in a way, because of how much he's been through for the last couple of years. Difficult to deal with. We feel for him."

The worries about Rose's health, if not his consistency, seemed to be fading before the latest injury.

After missing eight of 15 games in November, he had played 46 games this season, his most since suiting up for 81 in his MVP season in 2010-11. He hadn't missed a game since Jan. 10, a stretch of 19 straight. His minutes restrictions were over.

While his shot wasn't always locked in, the Bulls (36-21 and third in the Eastern Conference) expected to see him out there every night.

In the 11 games Rose has missed this season, the Bulls have gone 7-4 (.636), or slightly better than their .630 winning percentage when he plays (29-17). A projection based on the multiseason version of ESPN's real plus-minus suggests Chicago can expect to play at the level of about a 51-win team in Rose's absence -- basically the same as the Bulls' current 52-win pace.

News of Rose's injury reached people in the Bulls front office early Tuesday night. About three hours later, the team sent out a 36-word news release that said an exam and MRI confirmed Rose had the tear and surgery would be scheduled.

Rose could get the meniscus repaired, which comes with a longer rehab schedule, like last time, or he could get it "shaved down" and possibly return this season. Bulls team doctor Brian Cole will perform the procedure, as he did the previous two, according to Thibodeau.

"For us, first and foremost, our concern is for Derrick, not only as a basketball player but as a person," Thibodeau said Wednesday. "He's been through a lot. He's had to endure a lot. And he's gotten past a lot. It's disappointing news, and we're hopeful that everything will work out fine.

"Initially, the last procedure he had on the meniscus, we knew this was a possibility. So unfortunately it didn't take. Now they have to go back in and take care of it. We knew that it could happen, and it did. But our concern is with Derrick. I think you guys know how we all feel about him, the organization, the players, everybody. So it's tough news."

Thibodeau said he texted and called Rose but didn't say if they connected.

"As you could imagine, it's not an easy thing to deal with," the coach said.

Thibodeau, though, isn't counting out Rose, who could miss his fourth straight postseason at the still-young age of 26. For all the criticism of Rose, mostly coming from outside the organization, he's still a tough-minded player.

"That's what makes him who he is; he's got mental toughness," Thibodeau said. "He's gotten past a lot of hurdles. This is another one. He'll get past this one too."

Rose's Timetable After Knee Surgery
Stephania Bell discusses Derrick Rose's knee injury and the timetable for his return after he undergoes surgery for a torn meniscus.

Bulls In Trouble Without Rose?
Michael Wilbon discusses the future of the Bulls now that Derrick Rose is sidelined with another knee injury.

Expectations For Rose's Return
ESPNChicago.com Bulls writer Nick Friedell discusses the shock surrounding the torn meniscus in Derrick Rose's right knee, when he may return to the court and the mental impact on him and his teammates.