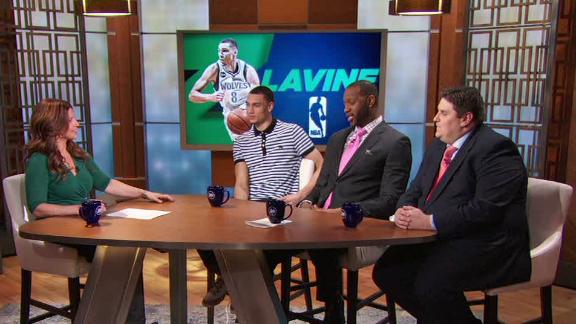 The Minnesota Timberwolves are scheduled to interview former New York Knicks and Houston Rockets coach Jeff Van Gundy on Monday in their fast-moving search for a new coach and face of basketball operations, according to league sources.

Sources told ESPN.com that the Wolves completed a similar interview over the weekend with former Chicago Bulls coach Tom Thibodeau, who broke into NBA coaching as a Timberwolves assistant during their expansion season in 1989-90.

Van Gundy's interview was arranged to be conducted Monday in Cleveland, where he also called Sunday's Pistons-Cavaliers playoff game for ESPN.

The growing expectation in coaching circles is that the Wolves will choose either Van Gundy or Thibodeau to take over the team as coach/team president, with the ability to bring in a seasoned front-office executive to assist with day-to-day operations.

The Timberwolves fired interim coach Sam Mitchell on April 14. Mitchell, who took over as coach after Flip Saunders died in October, led the team to a 29-53 record.

Timberwolves job appealing to Thibodeau, Jeff Van Gundy
Chris Broussard thinks the Minnesota coaching job is very appealing to both Tom Thibodeau and Jeff Van Gundy because of the talented young roster and they could have final say in the basketball operations department.

LaVine happy to be in position he's in
Zach LaVine joins The Jump and clears the air with Tracy McGrady about the dunk contest, then examine the positives Jeff Van Gundy and Tom Thibodeau, who are interested in the Timberwolves coaching job, can bring to a young and growing team.
Related topics:
sportsespntom thibodeauminnesota timberwolvesjeff van gundycoachingnba
Copyright © 2021 ESPN Internet Ventures. All rights reserved.
More Videos
From CNN Newsource affiliates
TOP STORIES