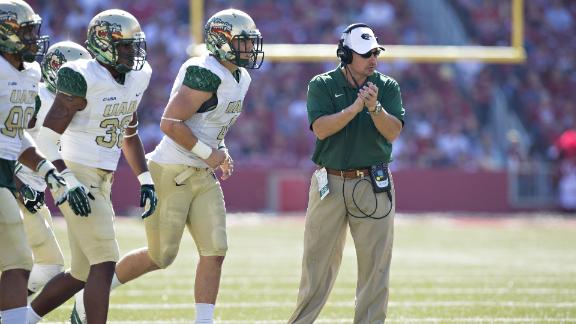 On Tuesday, UAB president Ray Watts announced that the Blazers' football program would be disbanded. And now UAB's bowl hopes are pretty much dead.

With five seven-win teams in Conference USA, the Blazers (6-6) cannot receive one of the league's five bowl berths. Any chance to receive an at-large bid is basically nonexistent, a source told ESPN.

"No one will touch them with what's going on with the program since other options exist," the source said.

C-USA league rules require its affiliated bowls to select the teams with the most victories, so East Division champion Marshall (11-1), West Division champion Louisiana Tech (8-4), Western Kentucky (7-5), Rice (7-5) and UTEP (7-5) get the nod over the Blazers.

UAB's only chance to play one final game would be for a bowl not affiliated with C-USA and with an opening to select the Blazers. There are currently 79 bowl eligible teams for 76 bowl berths, so it "doesn't look great" that UAB would be selected, another source said.

Two teams with 5-6 records, Oklahoma State and Temple, could increase the number of bowl eligible teams with wins Saturday against Oklahoma and Tulane.

Under first-year coach Bill Clark, the Blazers posted their first non-losing season since 2004, which marked the program's only bowl trip in school history.

C-USA will officially announce its bowl lineup Sunday. The conference's bowls are the Gildan New Mexico in Albuquerque, New Mexico (Dec. 20); the Boca Raton (Dec. 23); the Popeyes Bahamas in Nassau (Dec. 24); the Hawaii (Dec. 24); and the Zaxby's Heart of Dallas (Dec. 26).

With UAB eliminating football, it jeopardizes the Blazers' membership in Conference USA and associated programs, including the marching band, though the school said it hopes to remain in the league and Division I. Members of the band and cheerleaders joined in protests on campus.