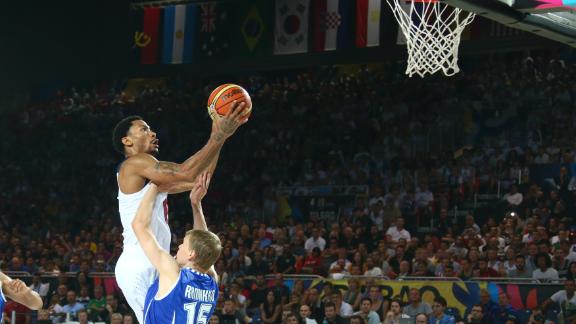 ESPN
BILBAO, Spain -- As the U.S. lead got bigger and the crowd quieter, Finland's players were forced to have a most uncomfortable conversation.

"We kind of talked a little on the bench a little bit, 'Hey, everybody remember when we scored the last time?' " forward Kimmo Muurinen said.

It was a long time. Almost an entire quarter.

The Americans held the Finns without a basket in the second quarter, opening defense of their title with a 114-55 romp Saturday in the FIBA Basketball World Cup.

Silencing the Finns in the second quarter on the scoreboard and in the stands, where their rabid fans filled an entire side of the arena, the Americans allowed just a pair of free throws in the period, outscoring their overmatched opponents 29-2 to open a 60-18 advantage.

The U.S. players also knew they were basically pitching a shutout for 10 minutes.

"Our coaches were encouraging us to keep up that effort by telling us every timeout, every dead ball, they only had two points or whatever," guard Stephen Curry said. "That's just motivation to keep doing what we're doing."

Klay Thompson scored 18 points and Anthony Davis had 17 for the U.S., which will play Turkey on Sunday in a rematch of the 2010 world basketball championship gold-medal game.

The event has since been renamed, but nothing else looks different for the Americans, who won their 55th straight game.

Finland was 0 for 17 in the second quarter, missing all six 3-point attempts, and missed 19 straight shots over the second and third quarters before Tuukka Kotta ended the drought with a basket with 8:48 remaining in the third that made it 62-20.

The Finns were making their World Cup debut as a wild card and didn't do much to prove they deserved it after the opening minutes. They missed all 13 3-point attempts in the first half but finally saw some shots fall after halftime when the game was long decided, giving their expected 8,000 fans who traveled here the chance to cheer.

The Americans played just four exhibition games and acknowledged they would have to use their five group stage games to continue improving a team whose players average just over 24 years of age, the youngest it has ever sent using professionals.

No problem against the Finns, where their size and athletic advantages made it look like men against boys.

And even if they draw host Spain in Madrid on Sept. 14 in the championship game, they wouldn't face a crowd that was much louder than this.

Fans wearing Finnish blue and white were pouring out of the exits of the metro station outside the arena by the dozens more than two hours before the start, looking like college football alums arriving for a Saturday morning tailgate.

They filled nearly every seat behind one of the baskets, cheering loudly from warmups straight through the opening minutes, when Gerald Lee made the game's first basket.

"It was awesome," Curry said. "They were energetic regardless of the score. Seemed like every basket Finland made was like a game-winner."

There just weren't many of them.

Lee had Finland's next bucket to tie it at 4 but then picked up a third foul just over 2 minutes into the game and had to go to the bench, leaving the Finns without nobody who could compete in the paint.

It was 31-16 after one, but after Teemu Rannikko's free throws cut it to 39-18 with about 6½ minutes remaining, the U.S. scored the final 21 points of the half, forcing a missed shot on defense, then running out for a layup.

Every U.S. player scored. Derrick Rose finished with 12 points and Rudy Gay had 10 as the Americans shot 59 percent from the field.

Finland finished just ninth in last year's European championship, failing to qualify automatically for the World Cup. But the Finns, ranked 39th, became the lowest-ranked team ever to receive a wild card, with basketball governing FIBA noting Finland's improvement on the court and the strength of its fan base.

And it didn't hurt that Finnish company Rovio, maker of the Angry Birds games, offered to provide advertising for FIBA if Finland was selected.

But none of those could help on the court, where all the best players were wearing red, white and blue and delivered highlight plays, with Rose flashing his old explosiveness with a second quarter drive and dunk.

Shawn Huff and Petteri Koponen each scored 12 points for Finland, which shot 28 percent.