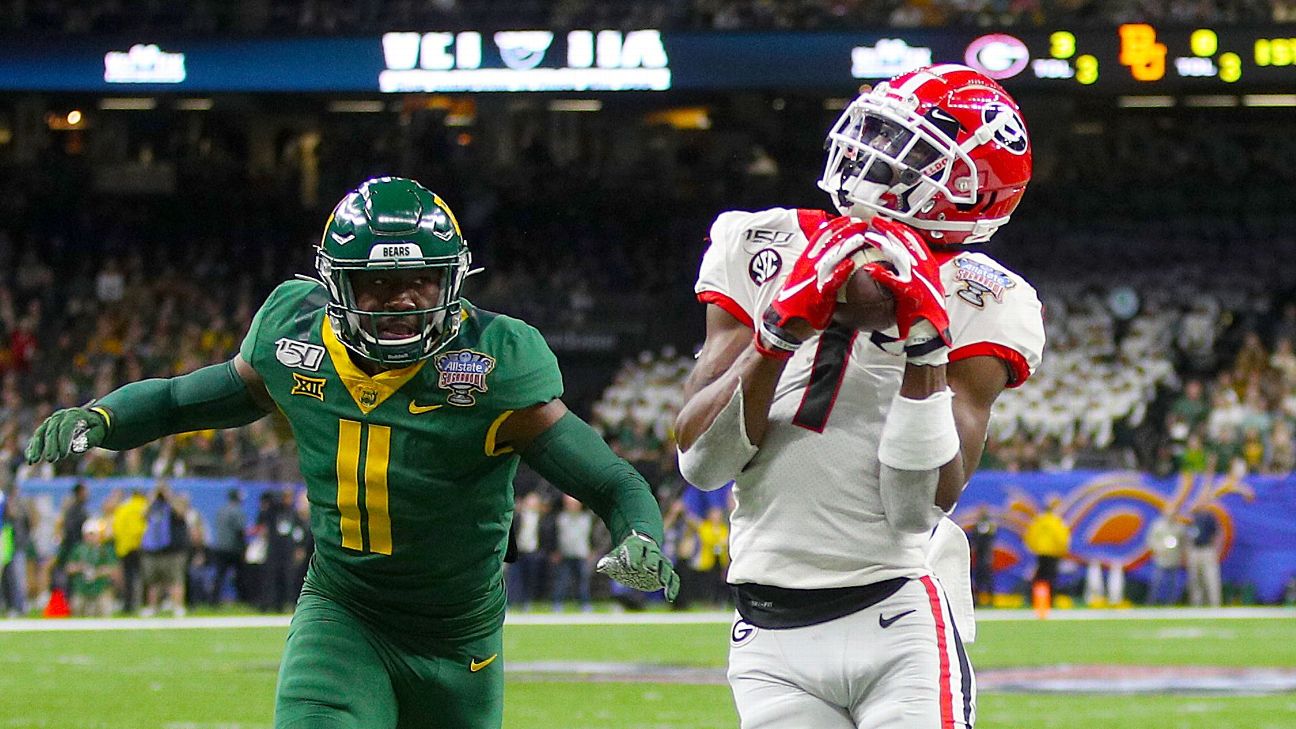 Despite the Big Ten and Pac-12 sitting out the fall season (for now), there's still some great football to be played, with the SEC, ACC and Big 12 among the Power 5 conferences participating.

Here are 10 teams -- including two outside the Power 5 -- that will be the most exciting to watch this fall. Note: This is not a "10 best teams in college football" list.

The Group of 5s to keep in your repertoire

The Red Wolves aren't a favorite in the Sun Belt (you'd have to look at App State or Louisiana there), but they are going to have an offense worth tuning in to.

Injuries hampered Arkansas State for much of 2019, and it still managed to finish 8-5. Starting quarterback Logan Bonner played just four games last season because of a hand injury, but replacement Layne Hatcher stepped in with 2,946 yards passing and 27 touchdowns. Both quarterbacks are at head coach Blake Anderson's disposal.

No matter who is running the show at quarterback, they should feel safe behind an offensive line that returns eight players with a combined 128 starts. Four of those starters earned at least honorable mention all-conference honors in 2019. Even you might feel comfortable getting back there (not really, don't kid yourself).

Get beyond the quarterbacks, and the Red Wolves return wideout Jonathan Adams Jr., who had 851 yards and five touchdowns last season, as well as starting running back Marcel Murray, who rushed for 820 yards and six scores.

The Black Knights finished 5-8 last season but were better than their record indicated after going 1-4 in one-score games. They nearly beat Michigan in Ann Arbor, losing in double overtime 24-21 after looking like the better football team over much of the game.

They've lost former starting quarterback Kelvin Hopkins Jr., but the Black Knights proved Saturday against Middle Tennessee State that they're going to be a team to watch, in part because they have the ability to produce drives like this one:

The Tigers were a few games away from being a College Football Playoff contender last season. Their four losses all came by a margin of nine points or less, including a 23-20 loss to LSU in Death Valley. They're expected to be even better this season.

Auburn is going to have a stout defense, and expect quarterback Bo Nix to step up in a big way after a freshman season with some ups and downs. He'll have a pair of some of the best wide receivers in the SEC with Seth Williams and Anthony Schwartz, but the offensive line is going to be a big question for them.

No matter how Auburn's season shakes out, I think we're all rooting for a good Iron Bowl against Alabama. 2020 has been a lot of things, and if college football is going to make it to the end of the season in a healthy manner, a great Iron Bowl will be well-earned for all fans.

If the Irish had the roster like that of Clemson or Alabama, they would have been a no-brainer as No. 1 on this list. That has more to do with simply being in the ACC for a year as opposed to being on the same level as Clemson or Alabama.

Starting with that, we get to see the ACC logo on their field. Don't get me wrong, it's not because I actually care whether or not Notre Dame is in a conference -- but I am thoroughly entertained because soooo many people do care.

The thought of Notre Dame joining the ACC for one season, winning it, and then going independent again would be the perfect kind of weird and funny we need during this season. It would be even more impressive given the ACC has mostly been "Clemson, and then everybody else" for the past five years.


On the field, the Irish have Ian Book taking snaps for his senior year, along with linemen Liam Eichenberg and Robert Hainsey, who have a combined 115 starts.

All things considered, Notre Dame has a talented team and is at worst the second-best team in the ACC -- I can't say that enough. Sign me up.

The Cowboys are going to receive the "sleeper" nomination by a lot of people this year, but they should probably just be considered a regular contender -- like most teams that aren't Clemson or Alabama.

The name everyone's familiar with is running back Chuba Hubbard, who rushed for 2,094 yards (the 16th-best rushing season in FBS history) and 21 touchdowns last season. He's the type of player where you may not care about his team, but you'll watch them because you just have to see what he's going to do. Hubbard had four games of 220+ yards, including 296 against Kansas State.

There's also wide receiver Tylan Wallace, who returned after suffering a knee injury late last season. But his success lays in the hands of quarterback Spencer Sanders, who showed progress later in the season before suffering a thumb injury.

Oklahoma State will have to beat Oklahoma in Norman, where they've won just once since 2002. But if there was going to be a year for them to do it, this could be it.

And regardless of how good Oklahoma State is, one of the best running backs in college football is always worth watching at any level.

Georgia has comfortably taken ownership of the SEC East the past few years, but after an 11-2 2019 season that was capped off with an Orange Bowl win, the Gators are looking to change that.

Kyle Trask is the SEC's leading returning passer, having thrown just shy of 3,000 yards and 25 touchdowns with just seven interceptions. If you're watching the limited football we've got this season, one of the SEC's best quarterbacks is worth tuning in to.

He's got solid go-to targets in tight end Kyle Pitts and wide receiver Trevon Grimes. And the Gators are high on Miami transfer Lorenzo Lingard, a former five-star prospect, at running back. Defensively, the Gators return six starters for a unit that led the SEC in sacks, and ranks third in SP+ for 2020.

Seeing if they'll be able to knock Georgia off their SEC East throne is going to be a major storyline throughout the season, and, assuming we get there, it will be one everybody watches this season.

If Alabama and Clemson are college football's two powers, with everyone else looking up at them (they are), the Bulldogs are the team looking most likely to join that upper echelon at some point.

The team looks different going into this season and it has changed even more since last week ago. Quarterback Jamie Newman opted out of the season, and wide receiver Dominick Blaylock tore his ACL in the same week.

But Georgia is still going to be one of the most exciting teams to watch in college football in 2020. J.T. Daniels, who transferred over from USC this season, replaces Newman. He'll be able to throw to George Pickens, who is undoubtedly one of the most talented receivers in college football. Even if the offense sputters, the Bulldogs have the top-ranked defense in Bill Connelly's SP+ rankings.

Georgia has come close to breaking through into Clemson and Alabama territory the past couple of years, and this year could finally be the one.

I think we're all at a point where we're going to be interested in Oklahoma strictly for their offense year-in and year-out. In his time at Oklahoma, Lincoln Riley has been a king at getting the most out of his quarterbacks, his worst being a Heisman runner-up in Jalen Hurts.

Spencer Rattler's got next, and will be expected to be in the thick of the Heisman race. You might ask why, since he's attempted just 11 career passes in three appearances before redshirting last season.

Rattler was ESPN's No. 1 dual-threat quarterback in the country and the No. 29 overall prospect in the 2019 ESPN 300. In high school, he set an Arizona state record with 11,083 passing yards and threw 116 TD passes. Riley offered him a scholarship as a freshman, which is something Riley doesn't do. That's how you know he's special.

Plus, we should trust that if Lincoln Riley didn't take another swing at the transfer portal, Rattler's clearly going to be something special. Because those transfer portal pickings have been good to the Sooners.

For Rattler only, Oklahoma gets a slight edge over Georgia.

Alabama and Clemson, because it's been this way for half a decade now

The Tigers get the two-spot here because of the absence of Justyn Ross for the season, but make no mistake -- they are still really, really good.

We've been talking about Trevor Lawrence being the top pick in the 2021 NFL draft for a couple years now. This could be his last season at Clemson, and we should expect him to go out with a bang.

While Lawrence is going to get the most attention, you're going to keep hearing running back Travis Etienne's name plenty. He became more involved in the passing game last year with a career-high 432 yards receiving. But his abilities on the ground with the football in his hands are some of the most exciting moments in college football. He doesn't get an overwhelming amount of carries, but he usually makes them count, leaving defenders reaching for air.

Similar to Hubbard, both Lawrence and Etienne alone are worth watching, regardless of how the rest of the team is. But luckily for everyone, Clemson is going to be good.

Just about everybody in FBS is playing a conference-only schedule, but the one nonconference game we expect to see that isn't officially scheduled is Clemson vs. Alabama at some point in the College Football Playoff.

You might be exhausted with it, but there's no denying it is some great football.

The Crimson Tide have been a must-watch every year for more than a decade, and that's not changing this season.

Alabama had nine players drafted in the first three rounds of the 2020 NFL draft, and are still the standard of college football. When there's a large exodus of talent, there's always another wave ready to take over and make a name for themselves.

Mac Jones takes over at quarterback for Tua Tagovailoa, and he has looked promising in his three starts after Tagovailoa's season-ending hip injury. He'll be operating with two of the best wide receivers in the league in Jaylen Waddle and DeVonta Smith, with Najee Harris pounding the rock in the backfield. And if for whatever reason it doesn't work out with Jones, freshman five-star recruit Bryce Young might make the Tide even more exciting to watch.

Injuries devastated their defense in 2019, and this year's group should be prime for a bounce-back season in 2020. With an all-SEC schedule, Alabama is going to be an easy source of entertainment every Saturday that we have football this season.

Alabama never needs any sort of added motivation to be great, but after a 2019 that resulted in just a Citrus Bowl win, there's no doubt they'll be playing with a little more intensity to get back into the playoff. 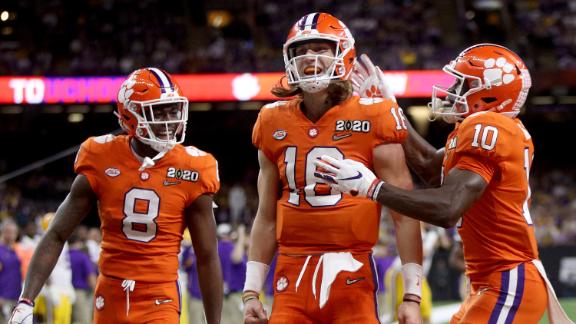