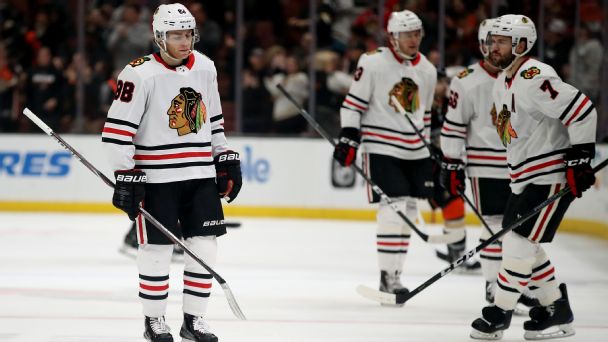 It's OK to admit that you're going to miss the Chicago Blackhawks in the Stanley Cup playoffs.

Just take a moment after you've exhausted yourself grave dancing on their season and contemplate all the things we've lost because the Blackhawks couldn't win. The constant complaining about preferential treatment from the NHL or its television partners. The eye-rolling over dynasty talk or the deification of Jonathan Toews or building monuments to Duncan Keith because he skates as much as pretty much any elite defenseman did until the 1990s. The intense, Pavlovian loathing that is sparked by the mere sight of their logo or mention of a particular player's name. The bandwagons of fans who probably couldn't tell you who Denis Savard was but know how many dogs Patrick Sharp owns.

Oh, and of course the greatest measuring stick the Western Conference has seen since the Detroit Red Wings were realigned into the East. That too.

For years it was said that the NHL would be better with a strong team in Chicago, and it turns out we were right. This boom for league interest and revenue is inseparable from the rise to prominence by the Blackhawks. I'm not going as far as that ill-conceived Sports Illustrated cover and saying that they're "The Franchise That Brought Hockey Back," because that's hyperbole and a disservice to the Pittsburgh Penguins, who did much the same. But to say the Blackhawks haven't played a role in making playoff life more interesting in the last decade -- even in their recent run of cameo appearances -- would be straight-up denial.

Teams like the Blackhawks are so rare in the NHL these days, in that they made you care. They were heroes -- who among us, outside of Philly, wanted them to lose the 2010 Stanley Cup Final? -- who lived long enough to become the villains. In an era of bloodless rivalries-in-name-only, you watched the Blackhawks to see if someone could knock the damn crown off their well-coiffed heads. They're a team that made the Los Angeles Kings the sympathetic underdogs. Do you understand how hard that is?

So I lament the absence of the Blackhawks this postseason, as much as I lament the fact that even if they return to the playoffs next season, they're never going to be the juggernaut they've been in previous incarnations. Not with a core that costs this much and is going to be between the ages of 30 and 35 next season. Not when every team in the conference can match or eclipse the speed with which the Blackhawks used to dominate, and certainly not with the Nashville Predators primed to be that dominant franchise for the next decade -- barring some goaltending development calamity.

Looking ahead for Chicago, there are some dreams and nightmares on the table in the near future. Time for a game of best case/worst case!

Best case: The Blackhawks hold on to Joel Quenneville, who is demonstrably one of the best coaches alive and who can't shoulder the blame for this frustrating season.

Worst case: The Blackhawks watch as he coaches Johnny Gaudreau, Sean Monahan and Dougie Hamilton to a Stanley Cup within the next two seasons after they fire him this summer.

Best case: Corey Crawford, whose absence this season is the primary reason I'm writing this now instead of looking at the Blackhawks' clinching scenarios, returns from whatever ails him and returns to form as an elite netminder next season.

Worst case: The head issues are systemic, and one of the few areas of the team that appeared settled (in goal) becomes a question mark.

Best case: Brandon Saad gets back to around an 11.5 in shooting percentage, rather than the inexplicably low 7.4 percent he is at this season.

(Full disclosure: At the time, I called the deal "a smart deal in the long term for the Blackhawks, albeit one that comes with a hell of a gamble," and it looks like they're going to lose that gamble given the current state of both players. I still think it's a deal that the Blackhawks had to make given their cap situation, but damn: Panarin is 37 points better than Saad this season!)

Best case: They find some way, somehow to move both Brent Seabrook and Artem Anisimov off their cap this summer. In the latter case, his no-move becomes a non-trade, so there's at least a chance. In the former ... yeah, your guess is as good as mine for a guy making $6 million with a full no-move until 2023.

Best case: General manager Stan Bowman works some more magic, coloring around the outside of his core with cheap labor and young players. Alex DeBrincat and Nick Schmaltz keep trending upward. The Blackhawks return to the playoffs, if not their prior dynastic heights.

Worst case: That despite all of these possibilities, all of these dream scenarios in which we extend the Cup contending life of Toews, Patrick Kane, Keith and the rest ... that we're watching the window slam shut on this incredible run.

Until, of course, the Blackhawks win the draft lottery this summer and select Rasmus Dahlin, giving them a franchise defenseman who'll make peanuts for at least three seasons.

Oh man, the haters are going to hate that.

Jersey Foul of the Week

Via Jeff, a tricky one:

As longtime readers know, we've debated The Gretzky Dispensation for some time. After all, his No. 99 has been retired around the NHL, i.e. retired by every team. In theory, this means that every fan would be eligible to wear a Gretzky jersey for their given team because, essentially, No. 99 has been retired in Wayne Gretzky's name. There's also a little bit of that weepy nostalgia stuff in the sense that Gretzky, by virtue of the leaguewide retirement, belongs to all of us. (Hugs all around!)

The counterargument is that you look like a complete idiot if you're a fan of another franchise, especially a Canadian one, and you wear Wayne Gretzky's name and number on your back. And what a compelling counterargument it is.

I caught the Tampa Bay Lightning's 7-6 win against the New York Islanders in Brooklyn on Thursday night, in which a favorite for the Stanley Cup played stunningly pedestrian defense -- twice, Islanders scorers were left completely alone in front at even strength, which is inexcusable -- in front of another pedestrian performance by former Vezina Trophy candidate Andrei Vasilevskiy.

Did coach Jon Cooper think about taking him out?

"For a young goaltender, you gotta fight through games like this," Cooper said. "It's not going to be 2-1 or 3-2. Sometimes, you know, it's about getting the win. Vasilevskiy found a way to get the win. In the end, he closed it out. That's big for him."

He needs confidence. Well, he needs a lot of things, like stouter defensive effort in front of him. And a nap. He could use a nap, after telling Joe Smith of the Tampa Bay Times that he's fatigued in his first full season as the starter. "Tiredness is something that I probably never faced before," he said.

(Obviously, that's to be expected, having carried this team himself for stretches this season.)

The good news, of course, is that he's 10-4-1 in those 15 games and 17-9-2 since Jan. 1. He's not been as dominant as he was earlier this season -- he was the Vezina favorite for months, before succumbing to the Pekka Rinne-ssance. But he's still gutting out some wins, like he did in Brooklyn.

The Lightning are going to go as far as Vasilevskiy will take them, even with this incredible offense they can unleash. He's started 12 games in the playoffs for his career, posting solid numbers (.920 save percentage, 2.85 GAA). But those were in seasons when he played 16 and 24 games, respectively. He'll be well over 60 by the time the playoffs start this season. Fatigue has been a factor already.

Is it time to worry about the Lightning goaltending, within context of their seeming predestined trip to the Stanley Cup Final?

Congrats to Declan and the Boys

He's credited the Tampa Bay Lightning's sponsorship of sled hockey as a factor in his passion for it. So on top of being the Wayne Gretzky of American sled hockey, Farmer's another reminder that investment in all types of community hockey programs is essential for its growth and, in the end, international success for the U.S.

Listen to ESPN On Ice

Fun podcast this week, as we talk with ESPN's John Buccigross about the NCAA men's hockey tournament -- all games to be televised on ESPN, ESPN 2 or ESPN 3 -- and Minnesota Wild left wing Jason Zucker about his team and being a Vegas native witnessing the Golden Knights' inaugural season. Plus, some playoff-race talk and the PWHA making their ballots public. Stream it here or catch it on iTunes!

The World Championships could be sick

A brief list of the players who figure to be eligible to play in the IIHF World Championships in Denmark this spring:

Not to say any or all of these players might go, but ... can we at least get a Johnny Hockey-Eichel-Kane line for Team USA to wash the stink off of us from the Olympics?

The Ottawa Senators are going to offer Erik Karlsson a new contract on July 1. Now, is this going to be a contract in actual dollars or Eugene Melnyk-adjusted dollars? [Bruce Garrioch]

Charlie McAvoy used his injury time off for some charitable work. [CBS]

At least one of Dave Lozo's ideas on how to fix the NHL was actually considered by the NHL! [Vice Canada]

Previewing the 2018 Isobel Cup Final. The Metropolitan Riveters will host the Buffalo Beauts in New Jersey on Sunday and the game is sold out. [Ice Garden]

Really good look at the Norris Trophy race from Dom Luszczyszyn. It's a race that is in some ways even tighter than that for the Hart. I have to run the numbers again, but I might actually be leaning P.K. Subban here, despite the fact that I think Victor Hedman's got the "it's his turn" vibe. [The Athletic (paywall)]

Jeff Veillette also ran the numbers for the Hart Trophy race. While I disagree with the conclusion, some good thoughts here. [Faceoff Circle]

Handicapping the potential replacements for Don Lucia at Minnesota. I mean, it's gotta be Bob Motzko, right? [Minnesota Daily]

Looking at the Golden Knights as a template for an NHL Seattle team. [Seattle Times]

The Killer Bees are returning to Rio Grande Valley as a USA Central Hockey League team, which means the return of Sir-Sting-A-Lot, one of our favorite mascots. [The Monitor]

"The two minor-league teams are next-door neighbors on either side of A. Phillip Randolph Boulevard. On Saturday, March 31, the Jacksonville Icemen will play as the 'Frozen Shrimp' in partnership with their baseball neighbors the Jumbo Shrimp." Of course they will. [First Coast News]

Finally, stick tap to Eddie O for winning the fight against cancer:

"All the cancer is gone. We beat this thing."

Frank Seravalli offers a postmortem on the Edmonton Oilers that is somehow longer than him just writing the words "Chiarelli" and "goaltender regression." [TSN]

In case you missed this from your friends at ESPN