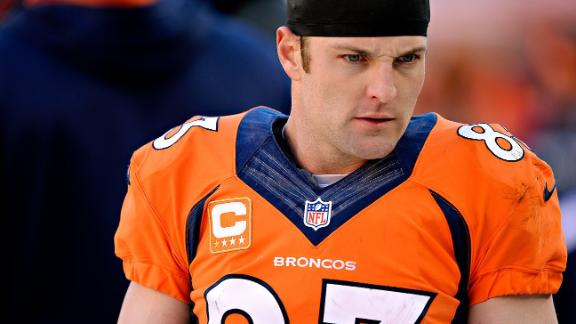 Welker tested positive from a sample taken shortly after he attended the Kentucky Derby, according to sources. He argued that the sample was tainted, but told The Denver Post that he does wonder if someone put something in his drink at the Derby.

The Broncos announced that Welker will be suspended for the first four games of the season for violating the NFL's policy on performance enhancing substances. The Broncos open the season Sunday night against the Indianapolis Colts. Welker will be eligible to return to the active roster Oct. 6.

In an email to The Denver Post, Welker said he would never knowingly take a substance to gain an advantage.

"I'm as shocked as everyone at today's news," Welker said in the report. "I want to make one thing abundantly clear: I would NEVER knowingly take a substance to gain a competitive advantage in any way. Anyone who has ever played a down with me, lifted a weight with me, even eaten a meal with me, knows that I focus purely on what I put in my body and on the hard work I put in year round to perform at the highest levels year-in and year-out."

Welker said that he now knows the drug policy procedures are "clearly flawed," according to the email, and that he will do everything in his power to ensure they are corrected.

He also vehemently denied a report that he took MDMA, which is also known as Ecstasy or Molly, at the Kentucky Derby.

"I wouldn't have any idea where to get a Molly or what a Molly is," Welker told the Post. "That's a joke. I don't do marijuana, I don't do drugs. I don't do any drugs."

Welker returned to the practice field Monday as he continues through the NFL's concussion protocol. He would have to be symptom-free to take part in a full practice and then remain symptom-free after that and be cleared to play medically by an independent doctor. Welker suffered his third concussion since Nov. 17 during the Broncos' Aug. 23 preseason game against the Texans.

The wide receiver had not been cleared for contact and Monday's appearance on the practice field was his first since he suffered the concussion.

"Tonight's news regarding Wes is very disappointing for our team, but we understand the league's authority in this area," Broncos coach John Fox said in a statement. "While it's unfortunate to not have him to start the year, I have full confidence in our wide receivers and expect that group to continue playing at a high level.

"I have no doubt that Wes will remain focused on his preparations for the season and stay in excellent shape during his time away from the team."

Welker's suspension is a huge blow to the Broncos' receiving game. Last season only four wide receivers caught passes for Denver and nearly 60 percent of those receptions will not be on the field in Week 1, as Eric Decker is now with the Jets and Welker is suspended, according to ESPN Stats & Information.

Over the last two seasons, only five players in the NFL averaged more targets per game than Welker. Welker ranks tied for eighth in the league in total targets over that span, despite missing three games, according to ESPN Stats & Information.

The Broncos have a tough start to the season, as they open up with four straight games against teams that won 10 or more games last season.

Information from ESPN.com's Jeff Legwold contributed to this report.