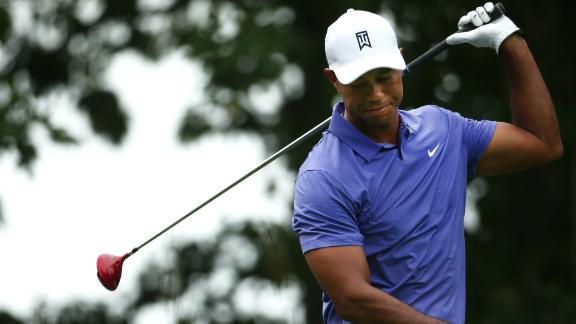 LOUISVILLE, Ky. -- Lee Westwood and Kevin Chappell shot 6-under 65s Thursday to share the lead in the opening round of the PGA Championship.

Spraying shots all over Valhalla, Tiger Woods made four bogeys, managed only one birdie and finished with a 3-over 74 that left him nine shots off the lead after the opening round Thursday.

Jim Furyk was one stroke back after shooting 66.

Westwood carried over the momentum from a closing 63 at Firestone, his best round of the year. The 41-year-old Englishman made nine birdies -- helping offset a double-bogey -- and eclipsed his best round in 17 PGA appearances, a 66 on the first day at Oak Hill in 2013.

"The golf course was all there in front of me. I just play it as I see it," said Westwood, who's had numerous close calls but never won a major championship. "Last week, I felt like I turned a corner."

Chappell, a 28-year-old Californian in his fourth year on the PGA Tour, turned in a bogey-free round. The final major of the year has produced some unlikely champions, and Chappell hopes to be the latest.

"I can't complain about being in the lead of any golf tournament," said Chappell, whose only professional win came on the Web.com Tour in 2010. "I just look forward to keeping it rolling."

Chappell was surprised to get an invitation a week ago Monday. He was at No. 104 in the world, not eligible in any category. Turns out the PGA Championship thought he was close enough to the top 100 to merit an invitation.

The UCLA grad took it from there. He hit an 8-iron to 6 feet for birdie on the 496-yard second hole. He also holed a bunker shot.

Furyk is off to another strong start in a tournament he nearly won in 2013.

He took a lead to the final day at Oak Hill, only to lose to Jason Dufner by two strokes.

Phil Mickelson, mired in his longest winless streak since 2003, was paired with Woods for one of the rare times at a major. Lefty was 1 over midway through his round, struggling just like his playing partner, but fought back on the second nine for a 69.

Woods yanked one shot into the gallery, put another into a creek. He looked very much like someone playing just his 11th competitive round since back surgery March 31.

Woods arrived at Valhalla only on Wednesday after treatment for a back injury that forced him to withdraw from Firestone last week.

Overwhelming favorite Rory McIlroy, coming off wins at the British Open and at Firestone, teed off shortly after Woods finished up.