When it comes to closers, when will managers learn? 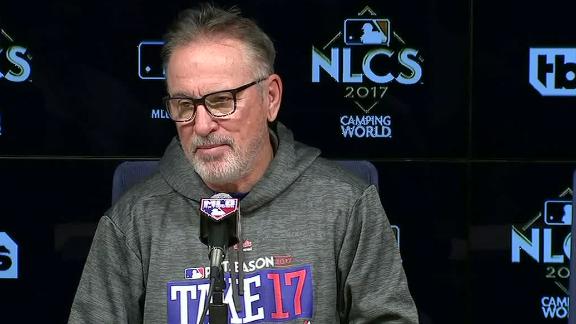 ESPN
By Sam Miller
There's a moment, as a manager is doing something that you can't fathom, when you doubt yourself.

In your heart you know that these managers weren't plucked randomly from a phone book, blindfolded, spun around seven times and sent out to the dugout to muck everything up. You know they're wearing those uniforms because extremely smart people chose them out of many qualified options. You know that they were selected because over the course of decades they demonstrated the special combination of skills and knowledge that prove a person capable of making 50 decisions per game under extreme pressure.

You know they've been trained, mentored, and tested by thousands of trials. You know these managers have access to far more information than you do -- not just access to the charts and graphs the front office prints out based on proprietary statistical data analyzed by doctoral-level mathematicians, but access also to the very players they are managing. Only the manager knows what's going on between each player and his girlfriend, or between him and his dead arm, or between him and his teammates.

And, further, the manager is, if you can believe it, even more self-interested than you are. The manager has to get this right. You, Sam Miller sitting at your desk, you can have a strong opinion with absolutely no stakes. But the manager will earn, in some cases, many millions of dollars more if he wins, and, in some cases, be fired if he loses, and in either outcome be judged by millions of fans who are counting on him to be good. If we believe humans are essentially rational creatures driven by essentially knowable incentives, then the existence of these incentives alone would logically make that manager a better manager than you are, sitting on your couch or in class or at your desk, having a low-stakes opinion.

And so, there's a moment when you doubt yourself. Because it's so obvious to you what's right, and Joe Maddon -- letting John Lackey pitch while Wade Davis sits on the bench -- is doing what's wrong. And Joe Maddon is smarter than you, more informed than you, and more incentivized than you. It doesn't make any sense that you'd be right and he'd be wrong, and so you doubt yourself.

And then the Dodgers'Justin Turner hits the ball forever.

I have a friend -- I can't remember which friend, or if it was even a friend as opposed to a fortune cookie -- who said something I think about a lot: "Ninety percent of people are bad at their jobs. This is true for Supreme Court justices all the way down."

A year ago, in the wild-card game, Baltimore's Buck Showalter decided to use every pitcher on his staff before he used his closer, Zach Britton, in a tie game. This failed -- Britton never got in -- and beyond failing it was a terrible decision every step of the way. Buck Showalter is not dumb -- a couple months earlier, in the exact same situation against the exact same team but with somewhat lower stakes, he used Britton in a tie game -- but on this day he was bad at his job.

(Just to quickly establish the reason we mostly all by now believe this is a bad move: Saving a closer for a save situation means the closer will pitch, at most, one inning, whereas bringing him into a tie game affords the possibility of getting multiple innings from him. Further, the stakes in a tie game -- when a run will certainly end the game -- are higher than in many save situations. If you hold the closer for a save and then score three runs in the top of the next inning, well, you've basically wasted the closer, because just about anybody can protect a three-run lead. Meanwhile, if your fifth-best starter allows even a single run before that happens, there's no game to save at all.)

Managers had been making that wrong decision for a long time, saving their closer for the save that never comes. But Showalter was so widely criticized for this move last year that it felt like this was a mistake managers would quit making. The rest of that postseason we saw managers using their closers aggressively, not just in tie games but as early as the seventh inning. "Buck Showalter cost the Orioles their season, but at least the conventional wisdom will change," Grant Brisbee wrote at SB Nation, and, yeah, that seemed right.

It is true that in the regular season this year we didn't see many teams breaking from Showalter's terrible, terrible example. Earlier this season, we looked at every team's closer usage to see whether managers were making different decisions. In tie games, the answer was mostly not: In only 10 of 61 tie games did the visiting team's closer start the ninth. But the regular season is a different animal. It's about getting through the grind of six months, about establishing roles and hierarchies that managers and players can trust, about making everybody comfortable and confident, and about dealing with the scarcity imposed by 13 scheduled games every two weeks. (And, yes, about getting players their stats.)

This postseason -- with higher stakes and far more off days -- has been different. Before Sunday there had been two games in which the visiting team was tied in the ninth, and in both cases the closer came into the game to protect the tie. And, more convincingly, closers had already pitched while trailing in eight of 22 games. Managers in this postseason have been focused not on the stat but on one thing: getting as many innings as possible out of their very best pitchers.

And John Lackey, not Davis, is warming up in the bullpen. Duensing walks a batter on four pitches. Then he gets two outs. And in comes Lackey, a below-average starter who allowed more home runs than any National League pitcher this year and who ... well, let's be brutally honest, might never throw another pitch in the majors. Instead of Wade Davis.

Lackey walks Chris Taylor. Then Turner hits it forever. Joe Maddon is smarter than us, though. What did we miss?

Maddon also said after the game that he's not always against using his closer in a tie game. But every time I read that tweet, I cringe. A little embarrassed for Joe Maddon, and a little silly for being embarrassed for somebody clearly smarter than me.

Davis was only available for one inning, Maddon says, which reduces -- slightly -- the benefit of using him in a tie game. That's one thing.

Closers like their routines, we often hear, so that's another. But to the extent that applies in the postseason, I can't imagine Wade Davis would look around a room of his teammates and say he wasn't available in a tie game. And, anyway, Davis was an ace setup man not long ago, so let's not act like he never developed the tie-game muscle. It's nevertheless on Maddon to use the regular season to prepare Davis for this situation. The Dodgers regularly used Kenley Jansen in expansive ways during the regular season, anticipating the playoffs; Maddon used Davis more rigidly than any manager used any closer.

There are fringier explanations. Maybe Davis wasn't available at all, and Maddon just doesn't want to tell us that. Maybe, uh, he'd identified the ninth inning as the perfect spot in the order to make a double switch and, having committed to the double switch, didn't want to use a pitcher who would only go one inning. That's a stretch. They're all stretches! The only non-stretch is that Maddon did a bad thing.

What this really comes down to is that we watched a smart manager fail, right in front of us, while every half-engaged person on Twitter knew it was happening. It's easy to say it, but it's hard, in our hearts, where we know Joe Maddon is quite possibly a Hall of Fame manager who knows and cares more than we do, to really mean it.

Unless you accept what my friend said: Almost everybody is bad at their job.

I, a human, failed at far simpler tasks today than Joe Maddon did. Tasks that I know I can do, and that you'd be a jerk to suggest I can't do -- but that I nevertheless failed at. Small, simple things that I wanted to do right. I failed.

Joe Maddon failed. That's it. We can say it. He failed. We'd probably fail, too. 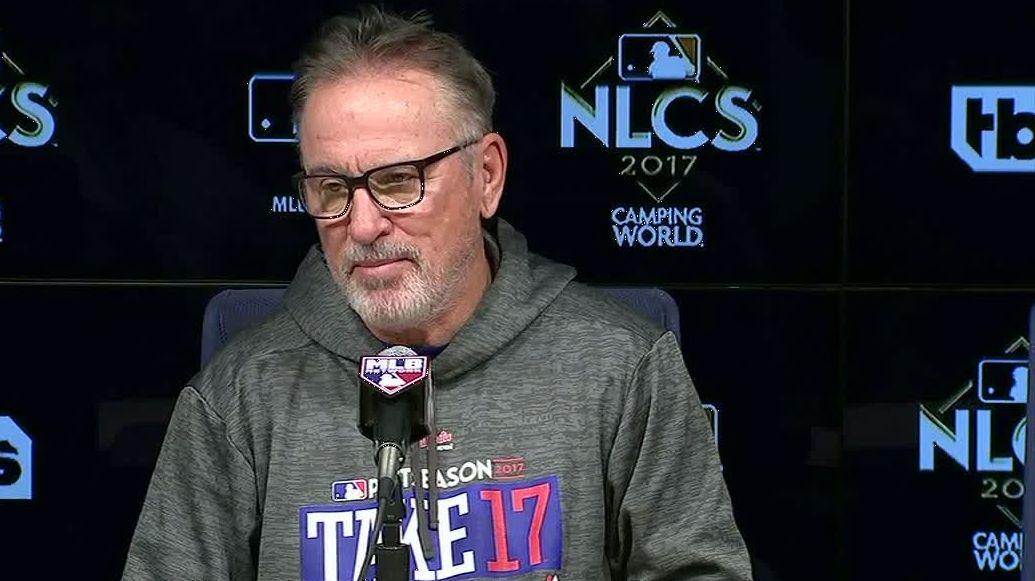 Maddon says nobody matches up well against Turner
Cubs manager Joe Maddon explains his decision to send John Lackey out to pitch in the bottom of the ninth inning, when Lackey served up Justin Turner's walk-off homer. 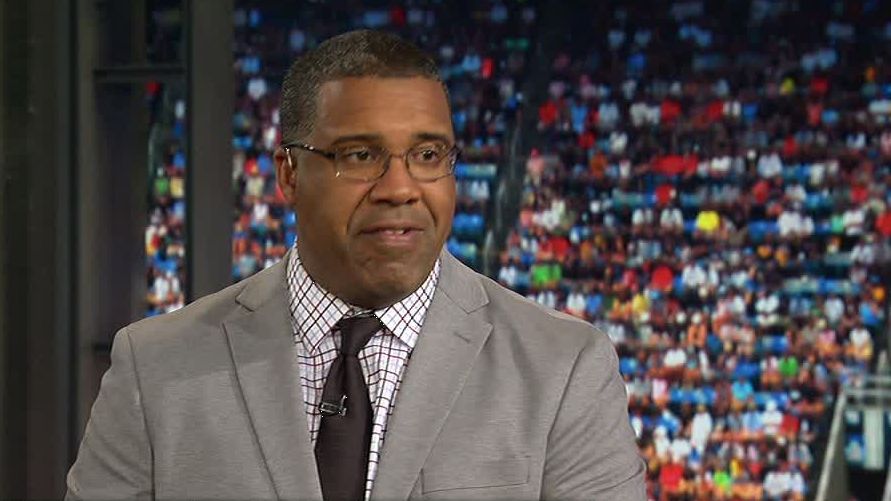