Where do Edmonton's McDavid and Draisaitl rank among the league's top duos? 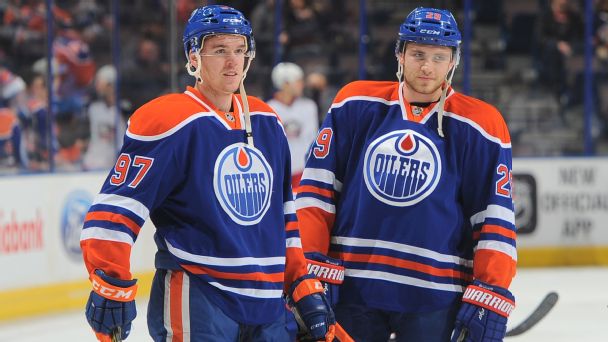 During the salary-cap era, the NHL has become a league of duos.

The Chicago Blackhawks (Patrick Kane and Jonathan Toews) and Pittsburgh Penguins (Sidney Crosby and Evgeni Malkin) have two of the best twosomes of that span, which began in 2005 -- and both teams have combined for six Stanley Cups since the start of the 2005-06 season.

Granted, both the Blackhawks and Penguins have several other players who have played large roles -- such asDuncan Keith and Marian Hossa in Chicago, and Kris Letang and Phil Kessel in Pittsburgh -- but if a team's top two skaters aren't elite, it's hard to go all the way.

Last season, Edmonton Oilers centerConnor McDavid led the league with 100 points and teammate Leon Draisaitl set a career-high with 77 of his own to vault themselves into the top-duo conversation. The Oilers also announced Wednesday that McDavid had signed a contract extensionworth $100 million over eight years. Draisaitl is a restricted free agent.

So, where does the Oilers' pair rank among the NHL's top twosomes from a value perspective, numbers perspective and Stanley Cup potential perspective? Here's a list of the top five duos based on those criteria.

Crosby and Malkin combine for an $18.2 million cap hit and are locked into deals that will keep them together until 2021-22, when Malkin's contract ends. They've won the past two Stanley Cups and averaged 1.175 points per game between them in 2016-17. They are the only duo on this list to play more than 60 games each a season and average over a point per game each.

Malkin will be 31 next season and Crosby 30, meaning they should have several Cup runs left.

By the time Draisaitl's deal is signed, these two might have the highest combined salary-cap hit in the NHL among a pair of teammates. While this might hurt their value as a duo, the Cup potential for both on the same team is high because of their ages.

McDavid is just 20, while Draisaitl is 21 -- and their 177 combined points are the highest on this list.

"McDavid is probably the fastest player in the NHL when he does things, like stickhandling and skating with the puck. That's why he's so dangerous and he's intimidating with his speed," an Eastern Conference scout said. "Draisaitl is just a big, strong kid. He's skilled and he's a very good complementary player to McDavid."

Stamkos was on pace for more than 90 points when he suffered a knee injury last November that ended his season. Kucherov finished the 2016-17 season with 85 points in 74 games, and his 1.15 points per game was fourth in the league behind McDavid, Crosby and Malkin among players who played more than 60 games.

"I think, at the end of the day, that Stamkos' best asset is his shot ... that dynamic of his game is so ridiculous. I mean, he scored 60 goals in the NHL," the scout said. "Kucherov is so unbelievably skilled. He's big, he's strong, he can make plays and he can score the highlight-reel goal."

The Lightning also have the 26-year-old Hedman, who had a career-high 72 points last season while averaging 24:30 of ice time per game. He's arguably the best all-around defenseman in the NHL, and is under contract for the next eight seasons at $7.875 million per year.

"He's like [Zdeno] Chara," the scout said of Hedman.

These three have reached a Cup Final together and another run -- or two -- is certainly likely during the next few years.

The Blackhawks have lost in the first round of the playoffs that past two years, which knocked Toews and Kane down on this list. Also, Toews' offense has dipped. His 0.29 goals per game last season were the lowest of his career.

Kane has consistently been a point-per-game player every season since 2009, except for one blip in 2011-12. He and Toews also have identical eight-year, $84 million contracts that kicked in during the 2015-16 season. Those deals carry a $10.5 million annual cap hit through 2022-23, which lessens their combined values vs. point production compared to the rest of the duos on this list.

Still, Kane and Toews have won three Cups each, will be just 29 years old this upcoming season and have a lot of prolific potential. Also, though they get the publicity, the Blackhawks still have Keith, who -- even though he turns 34 this month -- remains an all-around force. Any given game, he can be thrown into that game-changing mix.

"The skill of Kane, and the skill and grit of Toews ... they can hurt you in two ways," an Eastern Conference coach said. "What makes all of these players hard to play against is not only the fact that they are superstar players and dangerous individually when separate, but also lethal when they are together."

Subban and Ekholm formed perfect complements to each other, with Ekholm's strong defensive game enabling Subban to roam and create offense. Subban notched 40 points last season in 66 games and averaged 24:24 of ice time per game. Ekholm was a positive 5-on-5 puck-possession player despite drawing tough matchups.

"For 25 minutes per game, you could be guaranteed to be the better team no matter who the other guys throw on the ice," the former executive said.

Ellis' 16 goals during the regular season were tied for fifth among all defensemen, while Josi's 0.68 points per game ranked sixth among blueliners.

"I think Ellis' shot and his ability to see the ice, from an offensive standpoint, is what makes him good," said the scout. "He's not the biggest guy, but he's so smart on both sides of the puck and knows how to use his size to his advantage with guys one-on-one in the corner. Josi is a great skater. He can break the puck out of the zone nine times out of 10 when he gets it."

These two pairs were arguably the most important reason Nashville reached the 2017 Cup Final and could key another Predators run in the near future.