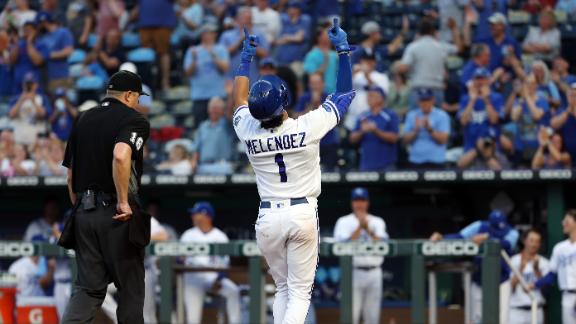 
Singer (1-0) had his best outing since last September 5, when he threw seven shutout innings against the White Sox. He struck out a career high nine batters and didn't walk anyone. He allowed just four hits in seven innings.

Singer was added to the roster as the 27th man for the doubleheader, but it was much bigger than a spot start.

"That was one of those when they come back they want to show you something," manager Mike Matheny said. "That's exactly how you're supposed to handle it. Every opportunity you get up here is special. He came back with a purpose."

"It felt good," he said. "The team was unbelievable. I felt like all three pitchers were there.

"I wanted to go out there and obviously do well, more for the team than anything."

Josh Staumont earned his third save in five chances.

While Matheny would not promise another start for Singer, he did not shy away from how big this outing could be for the former first-round pick.


"He looked like a completely different pitcher," Matheny said. "This could be one of those days that changes his career."

Davis Martin (0-1) made his debut and was equally impressive. He allowed just one run on five hits in five innings, walking one and striking out seven.

The Royals finally capitalized in the second inning after going 0-for-12 with runners in scoring position in the first game. Emmanuel Rivera led off the inning with a double and scored on a Michael A. Taylor double into left field.

The Royals got another run in the sixth on M.J. Melendez's first career home run, a 425-foot blast to right center.

"It was late in the game and we were up by one, I was trying to find a way to get on base," Melendez said. "I've seen some balls hit really hard and not go out. I think the nighttime helped a little bit. It was a great feeling."

The White Sox got a run in the eighth, but left fielder Andrew Benintendi threw out Josh Harrison as he tried to score from second on a single.


"We only scored three ourselves," manager Tony La Russa said. "The way I was taught to look at it is 'What did they have to hit?' If you don't get pitches to hit, you don't hit them. There were very few mistakes made in RBI situations."

White Sox: Selected the contract of RHP Davis Martin from Triple-A Charlotte. He made his Major League debut. They also added RHP Kyle Crick as the 27th man on the roster for the doubleheader. The White Sox placed RHP Michael Kopech on the paternity list. To make room for Martin on the 40-man roster, the White Sox moved LHP Garrett Crochet to the 60-day IL.

Royals: added RHP Brady Singer as the 27th man on the roster for the doubleheader. Between games of the doubleheader, the Royals placed C Salvador Perez on the 10-day Injured List with a left thumb sprain. C Sebastian Rivero was recalled from Double-A Northwest Arkansas.