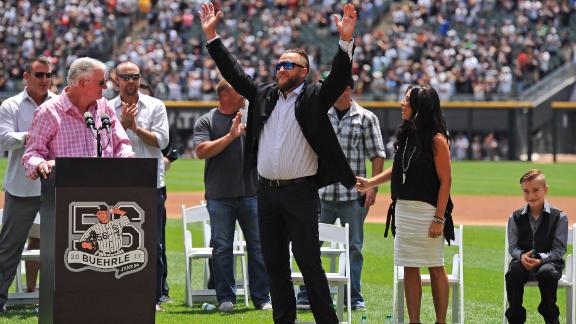 On the day his No. 56 jersey was retired, former Chicago White Sox star Mark Buehrle spoke much like he pitched.

Which is to say quickly, efficiently and from the heart.

Before the White Sox's 10-2 loss to the Oakland Athletics at Guaranteed Rate Field on Saturday, Buehrle gave a four-plus-minute tribute to the organization with which he spent 12 of his 16 seasons and the fans who supported him.

"It's an amazing feeling," said the 38-year-old Buehrle, who was flanked by his wife, two children, mother and father at the 30-minute ceremony. "I really can't put it into words how I feel. ... It's a special day."

Buehrle received a four-wheeler and pickup truck among several gifts. His 9-year-old son, Braden, sang the national anthem before his 8-year-old daughter, Brooklyn, threw out the ceremonial first pitch. An oversized "56" was stenciled in the dirt behind second base.

Widely regarded as the greatest White Sox left-hander in the expansion era, Buehrle recorded 161 of his 214 victories in a Chicago uniform. He helped the team win the 2005 World Series.

"I was just surprised and shocked, and emotions hit me," Buehrle said. "That's why I had my [sun]glasses on. A couple of guys said, 'What -- are you afraid to start crying?' I'm like, 'I'm sure there will be some tears shed out there.' I was just trying to soak everything in."

"As I look around this stadium, it is just amazing how much these people love you or how many people came out to see you on this great day," team owner Jerry Reinsdorf said. "In case you weren't aware of it, we don't draw 40,000 every day."

Known for his machine-like consistency and rapid-fire delivery on the mound, Buehrle thrived on savvy more than stuff. He was a five-time All-Star and four-time Gold Glove winner.

The event took place eight years to the month after Buehrle pitched the third perfect game in franchise history, a 5-0 gem against the Tampa Bay Rays at the ballpark then called U.S. Cellular Field -- adding to a no-hitter he pitched in 2007 against the Texas Rangers.

"Buehrle, day in and day out, was the same guy, and that's what makes him so special," Guillen said. "His teammates love him."

Buehrle thanks White Sox fans
Mark Buehrle jokes he should be on the mound and not talking on the microphone during his number retirement ceremony.
Report a correction or typo
Related topics:
sportsespnmlbchicago white soxjerseyretirementno 56mark buehrle
Copyright © 2020 ESPN Internet Ventures. All rights reserved.
More Videos
From CNN Newsource affiliates
TOP STORIES