Why The Ray McDonald Case Is Terrible For The NFL 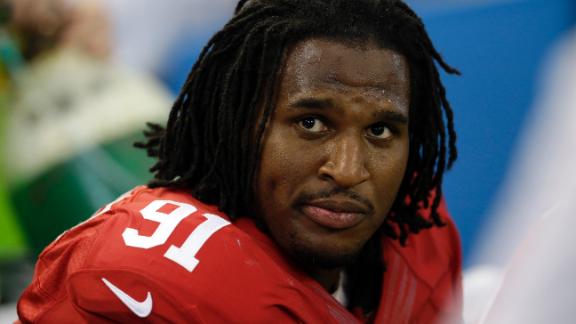 On a quiet Memorial Day, news of Ray McDonald's arrest swept through the NFL news cycle like a summer storm. Within hours of a report alleging that the Bears defensive lineman had assaulted a woman with a child in her arms, Chicago announced it had released McDonald.

"We believe in second chances, but when we signed Ray we were very clear what our expectations were if he was to remain a Bear," Bears general manager Ryan Pace said in press release. "He was not able to meet the standard and the decision was made to release him."

Apparently, the Bears were the only ones who didn't see this coming. The whole mess has revealed deep problems that remain in the way players are vetted by teams and disciplined by the league. The other key takeaway: Bears owner George McCaskey doesn't appear to be qualified to sit on the NFL's new code of conduct committee, a position he now holds.

McDonald was arrested twice last season while a 49er, once on a domestic violence-related charge last summer, and in December he was accused of sexual assault. San Francisco stuck by him until the second arrest, then released him citing a pattern of poor decision-making.

To be absolutely clear, McDonald was not charged in either case and filed a defamation suit against a woman who claimed he assaulted her. You can read more about his legal issues here. After an investigation, the NFL itself declined to penalize McDonald according to its own code of conduct policy.

But a cheap player with skills, like Ray McDonald, is an appealing commodity. Suddenly McDonald was on the market and funded his own trip to Chicago, where he got a two-hour interview with Bears owner George McCaskey, who later personally vouched for McDonald.

"I was impressed with how sincere he was and how motivated he is," McCaskey told the Chicago Tribune in February. "He understands, I think, that he could have well been facing the end of his football career. And he loves football. And he wants that career to continue. So I was impressed with his motivation."

What McCaskey -- again, remember that this guy is a member of the NFL's revamped code of conduct committee -- failed to do during the laughably one-sided due-diligence process, was to talk to anyone who was an attorney for one of the alleged victims in the domestic violence or sexual assault cases in the months before. Or, goodness forbid, one of the women herself, if she wanted to speak with the team.

"An alleged victim, I think -- much like anybody else who has a bias in this situation -- there's a certain amount of discounting in what they have to say," McCaskey explained.

Have we all learned a lesson here? Setting up an NFL echo-chamber isn't the same thing as an actual investigation into a player's background. McDonald, his mom and his former coaches have bias, as well. The point is to get all sides of the story and then make an informed decision. What McCaskey did was collect love notes.

McCaskey, as a member of the NFL's shiny new committee that is meant to bring disciplinary credibility to the league, needs to be held accountable. He should be removed from that committee because he appears to lack the basic respect for alleged victims of assault and domestic violence and seems to have no understanding of a legal process that often results in no charges.

The team even contributed to the idea that McDonald was blameless on its own website in an article called, "McDonald excited about 'fresh start.'"

"I had two incidents as to where I feel like I didn't do anything wrong," McDonald said in the story.

Even if the Bears are willing to give McDonald a third chance, heading into the experience with the idea that McDonald just got a couple of bad breaks isn't helpful. An important part of dealing with the issue is working with a player to understand what has happened, not deny it.

Instead, McCaskey and McDonald appear to have moved forward under some very flawed assumptions. That's understandable from McDonald, a player looking for a job in a limited market, but it's inexcusable from McCaskey.

For McCaskey, what is the downside? He looks foolish for backing McDonald so completely -- that's certainly true here. But he cuts a player and doesn't take a cap hit. There's really no cost for taking a chance on McDonald.

It's hard to fault the Bears when the NFL itself declined to discipline McDonald. You could ask for a mulligan on the whole mess were it not for what McCaskey unwittingly revealed in his comments about "reverse sexism" and "bias."

If the NFL wants to appear serious about code of conduct violations, it needs to set some standards when it comes to player evaluations. Adding women and former prosecutors to its own staff didn't help a team like Seattle, which botched an investigation into 2015 second-rounder Frank Clark.

Right now, the league wants to reform, but the teams just want to win.