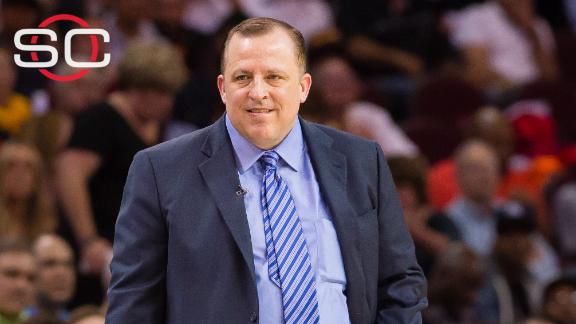 Tom Thibodeau is nearing agreement on a five-year deal in the $10 million range annually to become the coach and president of basketball operations of the Minnesota Timberwolves, league sources told ESPN.com.

Sources told ESPN.com that Thibodeau and the Wolves were in the final stages of negotiations Wednesday on a deal that would give the former Chicago Bulls coach full control of basketball operations in Minnesota.

Wolves owner Glen Taylor, sources say, has actually been eyeing Thibodeau for months as the ideal coach to take over a roster laden with top young talent, featuring headliners Karl-Anthony Towns, Andrew Wiggins and Zach LaVine. After missing the playoffs for 12 straight seasons, the longest active streak in the league, the Wolves also have a lottery pick in this year's draft.

Thibodeau's first NBA coaching job was in Minnesota as an assistant to Bill Musselman in the Wolves' expansion season of 1989-90.

A quarter-century later, Thibodeau is now poised to take over and bring in a seasoned front-office executive to assist him with day-to-day basketball operations. The Vertical website reported Wednesday that San Antonio Spurs assistant general manager Scott Layden, formerly GM of the New York Knicks and Utah Jazz, is in talks to join the Wolves' front office, which is currently headed by Milt Newton.

After winning nearly 65 percent of his games over five seasons with the Bulls, Thibodeau was fired last season after clashing with management on his hard-driving style, which included a propensity for playing his most important players more than 40 minutes per night to squeeze out every possible victory from the schedule.

He spent this season visiting different franchises, including spending some time in San Antonio, where Layden has worked under Gregg Popovich and R.C. Buford. Layden and Thibodeau have known each other for years, dating to Thibodeau's days as a Knicks assistant coach when Layden was running the front office.

Thibodeau and ESPN analyst Jeff Van Gundy were the two finalists for the Wolves job after interviewing Sunday and Monday, respectively. Sources say Van Gundy remains the top co-candidate in Houston alongside former Oklahoma City Thunder coach Scotty Brooks, who is the runaway top candidate in the Washington Wizards' search for a new coach.

Sources say that the Rockets are hopeful Brooks will wait until Houston' s season is over before taking a new job, and the Wizards are expected to press Brooks to fill their vacancy while the Rockets remain alive in a first-round series against the 73-win Golden State Warriors.

Minnesota interim coach Sam Mitchell, who took over after Flip Saunders died in October, led the team to a 29-53 record last season. Mitchell was not retained, but was scheduled to interview with the Sacramento Kings.