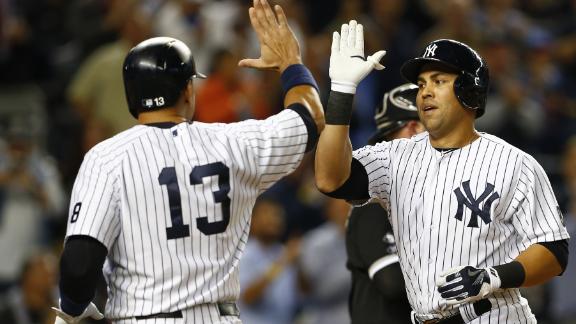 NEW YORK -- The Yankees bid farewell to Yogi Berra with a ceremony before Thursday night's 3-2 win against the Chicago White Sox.

A two-minute video tribute was shown before a gathering of what appeared to be about 10,000 fans. The video included shots of Berra as a boy in St. Louis, in his Navy uniform, and of course, as a star with 10 Yankees world championship teams.Each member of both teams lined up along the baselines during the ceremony.

That was followed by the presentation of an "8"-shaped blue and white wreath that was placed in the catcher's box by a contingent of Yankees: manager Joe Girardi, Brian McCann, Austin Romine and Gary Sanchez, all of whom, like Berra, are or were catchers.

Then came a moment of silence, followed by the playing of "Taps" by a Navy bugler and the singing of the national anthem by a Navy singer. Berra, who died on Tuesday at age 90, served as a gunner's mate in the Navy during World War II.

In addition to playing on 10 Yankees championship teams, Berra was a three-time MVP and later led the Yankees and Mets to the World Series as a manager.

"It's been a tough couple of days for us,'' Girardi said before the game. "Yogi meant so much to the organization, to the city, to all of us. For me, personally, I miss him. I had a chance to talk to him on Saturday before the game, and you never think that's going to be the last time you're going to talk to someone. I miss him. I miss having him around here. The laughs that we had. The knowledge that he gave me. How he always made you feel comfortable.

"It's just not going to be the same."

The Yankees will pay tribute to Berra by wearing the No. 8 on their jersey sleeves the rest of the season.