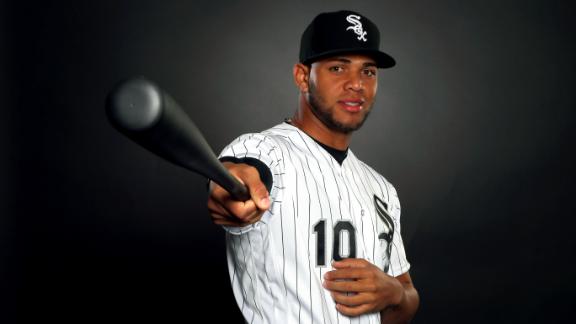 CHICAGO -- Yoan Moncada has a friend from his hometown to show him all about life in the big leagues in his new city.

But despite some construction and delays, the trip to Guaranteed Rate Field was completed Wednesday for Moncada, Chicago's new second baseman and baseball's top prospect, according to Baseball America.

"I texted [Abreu] and I asked him in the morning if he can pick me up at the airport, and he did it," Moncada said through an interpreter. "I'm happy. I'm trying to enjoy the moment and enjoy this opportunity. I'm in the big leagues right now, and this is where I want to be."

The switch-hitting Moncada, 22, batted sixth in a 9-1 loss to theLos Angeles Dodgersand was hitless in two at-bats. He drew a walk in his first plate appearance for the White Sox, then grounded out in the fourth inning and flied out in the sixth.

The White Sox sold about 5,000 tickets Wednesday partly in response to Moncada's call-up from Triple-A Charlotte, according to the team.

"I've known him since he was a kid," Abreu said through an interpreter, from his locker stall next to Moncada's. "We were from the same town, and I knew him from that time when I was playing there. He's just an outstanding player. He's got all the tools to be an All-Star."

Moncada was acquired from the Boston Red Sox for ace Chris Sale in the offseason. He hit .282 with 12 homers, 36 RBIs and 17 stolen bases at Charlotte. Boston spent $63 million -- including a record $31.5 million bonus -- to sign Moncada in 2015, after he left Cuba. Moncada played eight games last season for the Red Sox, batting .211 with four hits in 19 at-bats. He drove in one run.

White Sox manager Rick Renteria admitted there was a special feeling in the air with the appearance of Moncada, the first to arrive from a deep crop of young players brought in by general manager Rick Hahn.

"I love his makeup. He's driven," Renteria said. "There are people who see him and he's a very gifted athlete, so sometimes he does things very easily that may be misconstrued as being nonchalant; but he can get to balls, he can do things seemingly without any effort.

"He's ready to give you everything he's got. And he knows what we expect, what we ask of them. But we want them to have fun in the big leagues. He's going to be a big part, hopefully, in where this organization is going."

Moncada continues a Cuban connection for the franchise that dates to Hall of Famer Minnie Minoso and continued with the $26 million signing of 19-year-old outfielder Luis Robert earlier this summer. Abreu hopes to help Moncada along the way, just as Cuban players Alexei Ramirez and Adrian Nieto did for him in Chicago when he arrived in 2014.

Renteria said Clippard, who was traded for the fourth time in less than three seasons, will fill the closing role vacated by Robertson. Clippard, a right-hander, is 1-5 with a 4.95 ERA in 40 games for the Yankees.

Right-handed pitcher Brad Goldberg was also called up by the White Sox to help in the bullpen. He allowed four runs in a third of an inning in his only outing with Chicago last month.