Yu Darvish overcomes frustrations to get first win with Cubs 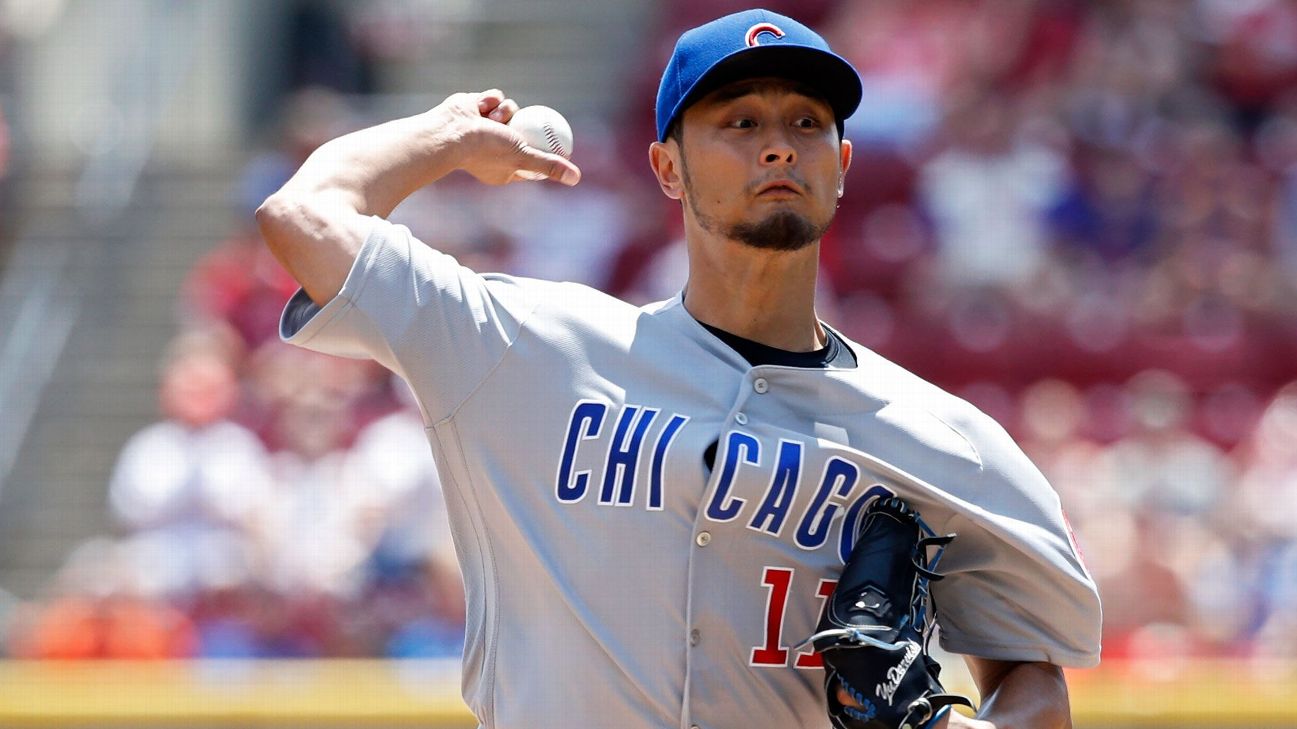 He had just walked Cincinnati Reds starter Tyler Mahle and was showing some signs of frustration. It wasn't the first time he had issued a free pass to the opposing pitcher this season, and with two Reds on base and two outs, it was anyone's guess what would happen next.

Darvish had imploded in other similar situations in a Cubs uniform, so first baseman Anthony Rizzo decided to pay him a visit.

"He walked the pitcher," Rizzo recalled after the Cubs' 6-1 win. "He's walked the pitcher a couple of times. He was pissed. I've gotten to know him. You just go over and calm him down a bit. I said, 'Don't worry, we'll score some runs for you.'"

It took one pitch for Darvish to get out of the jam as he induced Billy Hamilton to pop up to shortstop Javier Baez. Inning over.

"I was trying to calm myself, letting the frustration come out," Darvish said through his interpreter about that moment. "I was thinking of saying something out loud, to get it out of my system, and Rizzo came over and said the same thing, 'You look very frustrated. Let's keep it together.'"

The rest of the day went smooth for the 31-year-old as he earned his first win as a Cub and 150th overall, combining his time in the majors with his years in Japan.

The difference for Darvish, who came into the outing with a 5.56 ERA, was his fastball. According to ESPN Stats & Information, opponents were hitting .333 in at-bats that ended on it before Sunday's start. And the pitch was missing bats only 17 percent of the time. But the Reds couldn't catch up to it, earning just one hit in 12 at-bats that ended on fastballs, while whiffing 36 percent of the time on it.

"The difference was, after the first inning, he really gained command of his fastball," manager Joe Maddon said. "Dotting that up at 95 and 96 mph ... My take on him is when he gets into a rhythm out there, it's almost like he stops thinking and just starts pitching. I think he has a tendency to overthink things. When he gets the ball back from the catcher, sees sign, sees glove and throws it, man he gets really good, fast."

Getting past that first inning was another big moment for Darvish. His command was off to start the game as he loaded the bases on a walk, single and hit-by-pitch. Was the implosion going to come earlier than usual?

"My off-speed and my fastball weren't there in the first inning," Darvish said. "I'm still changing my mechanics, so there is still room to wiggle."

Darvish gave up a run, but that's all the damage he would allow after throwing 39 pitches in the first inning. Amazingly, Maddon almost sent him out for the seventh inning, as his pitch count was just 94 at that point. He gave the Cubs hope that he has turned the corner with his new team. He allowed just two hits in six innings. He also pitched well in his last outing but only lasted four innings due to cramping.

"It's definitely a confidence boost, the last two outings, including today," Darvish said. "I'm eager to go out there and do what I do every time."

Darvish was aided by back-to-back home runs by Kyle Schwarber and Baez. Later, Schwarber got ejected for the first time in his career due to arguing a high strike-three call by plate umpire John Tumpane.

"I flipped my bat and said it was high, and I said a choice word in there," Schwarber explained. "I don't want to show him up. I wasn't looking at him. And then he just threw me out, and that's when I kind of lost it, because I didn't think that ejection was necessary."

Baez came in between Schwarber and the umpire before things escalated, and the ejection didn't have an effect on the outcome of the game. That's because Darvish buckled down in two innings that could have gone south on him. The Cubs' starting rotation has been better of late, which isn't lost on Darvish.

"Not only does everyone else have wins, but their stuff, in general, is just better than mine," Darvish said. "Going forward, that has an effect."

In the end, it's just one game, but he has to start somewhere. And the idea of taking a moment for himself when the pressure mounts is something Darvish says he'll take with him moving forward. He'll take a breath and perhaps get a visit from a teammate. It worked Sunday, finally earning Darvish a W with the Cubs.

"One win is much better than zero wins, so hopefully I can ride the wave," Darvish said. "After the game, Rizzo came up to me and said, 'You looked very frustrated out there.' That made me laugh."